It’s time once again to enjoy the wonderful work that Gust’s sound team puts into its flagship series — this time with the excellent music from Atelier Sophie: The Alchemist of the Mysterious Book.

Atelier Sophie’s soundtrack is a pretty substantial one, consisting of 94 tracks in total — and as such, there were a fair few people working on it. Series mainstays Kazuki Yanagawa and Daisuke Achiwa return as always, as does Hayato Asano, who had gradually been becoming more prominent not just in the Atelier games, but in Gust’s work in general up until this point.

They’re joined by contributions from Ryudai Abe, Yu Shimoda, Miyoko Kobayashi and RURUTIA. So let’s take a moment to go through some favourite tracks — and if you picked up the physical release of the complete Mysterious Trilogy from Play-Asia, don’t forget you can download the full soundtracks with your serial codes until April 21, 2024!

END_OF_DOCUMENT_TOKEN_TO_BE_REPLACED 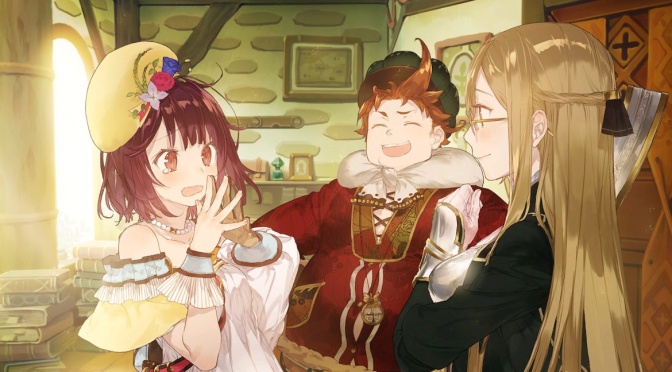 While, as we’ve previously explored, the game takes a deliberately “directionless” approach to its early hours, these themes are nonetheless apparent from the very beginning of the game. And they’re explored not only through our heroine Sophie herself, but through many of the other characters, too.

So let’s take a closer look at the narrative, themes and characterisation of Atelier Sophie: The Alchemist of the Mysterious Book, and ponder how these characters grow and change over the course of their respective journeys.

END_OF_DOCUMENT_TOKEN_TO_BE_REPLACED

One of the recurring things that has come up time and time again as we’ve been looking at Atelier Sophie: The Alchemist of the Mysterious Book is how this game very consciously does things differently from what has come before.

And, of course, it’s evident in the combat system. This is a particularly interesting aspect of Atelier Sophie: The Alchemist of the Mysterious Book to analyse in detail, because superficially its combat mechanics might resemble the last six games in the series to one degree or another — but in fact, things unfold quite differently. Let’s explore!

END_OF_DOCUMENT_TOKEN_TO_BE_REPLACED

As is tradition for the series at this point, Atelier Sophie: The Alchemist of the Mysterious Book shakes things up considerably when it comes to its core alchemy mechanics.

And again in keeping with past installments, the reinvention isn’t so radical that it feels incongruous with the rest of the series, but it’s distinctive enough to make Atelier Sophie: The Alchemist of the Mysterious Book stand out nicely amid its many, many peers.

So today let’s take a closer look at that alchemy system — along with how the people around the town of Kirchen Bell can help out with your studies!

END_OF_DOCUMENT_TOKEN_TO_BE_REPLACED

Having taken a high-level look at Atelier Sophie’s place in the series and its overall game structure, it’s time to look more specifically at the way it does certain things.

In this part of the Atelier MegaFeature, we’re going to take a look at what Sophie gets up to when she leaves the safety of her hometown Kirchen Bell and heads out into the big, wide world. As we’ve seen elsewhere in the Atelier series, exploring and gathering ingredients is an important part of an alchemist’s lifestyle — and Sophie’s life as depicted in Atelier Sophie is certainly no exception in that regard.

So empty that Basket and throw on those gathering gloves — it’s time to hit the road!

END_OF_DOCUMENT_TOKEN_TO_BE_REPLACED

What, exactly, is an “RPG” anyway? The term covers such a broad spectrum of different game types these days that it’s fast becoming less useful than it once was — and yet it’s still understood by many people to mean a few things.

Growth in power over the duration of the story; strength, competence and other things that can grow (and shrink!) represented as numerical values; abstract mechanics that represent things which would be difficult to simulate “realistically”. All of these are pretty constant, regardless of what type of RPG you’re playing.

But the approach to story — and indeed the main “point” of the experience — varies wildly from game to game. And with Atelier Sophie: The Alchemist of the Mysterious Book, we see a game with a noticeably different feel to many of the titles that have come before in the Atelier series.

END_OF_DOCUMENT_TOKEN_TO_BE_REPLACED

After how beloved the Dusk subseries of Atelier has become over the years, how could Gust possibly follow that up?

By doing what they’ve always done, of course: completely reinventing the series and kicking off a whole new set of games. Doing so doesn’t stop the Dusk series from existing, after all — and it also prevents the series from stagnating. Not that it was ever at any risk of doing that anyway, given how much we’ve seen it varies between individual installments!

In this part of the Atelier MegaFeature, we’ll be taking a high-level look at the first game in the Mysterious trilogy, Atelier Sophie: The Alchemist of the Mysterious Book. Where did this game come from, what was the thinking behind certain aspects of its design — and what do we have to look forward to?

END_OF_DOCUMENT_TOKEN_TO_BE_REPLACED

Our second playthrough of Warriors All-Stars gets well and truly underway as we get to grips with Sophie’s moveset, and look at expanding Tamaki’s forces.

On today’s agenda is Mitsunari Ishida, a vibrant-haired, brilliant tactical mind with his own strong opinions on how best to wage war. How will he get along with the rather flighty Sophie… and the somewhat more grounded Plachta?

Better punch a whole load of dudes in the face to find out!

This time around, we’re taking Sophie from Atelier Sophie as our leading lady, which puts us into Tamaki’s story route rather that Setsuna’s, which we explored last time around.

This should mean we get the opportunity to encounter and recruit some different characters and see some brand new story scenes… as well as getting to throw Punis at people. What’s not to like?