It’s a personal post today. I’m not going to apologise for that, because it’s important to me, and I’m sure all of you reading this understand that too.

Today, we suffered a great loss in our family: our beloved cat Ruby was in an accident, and passed away. Thankfully we were able to say our goodbyes to her, and now she is resting peacefully.

I wanted to take the opportunity to leave a permanent (well, as permanent as anything on the Internet ever is) record of how much we loved her, and how much she will be missed. Please, join me in celebrating how much this beloved companion — no, this member of our family — meant to us. 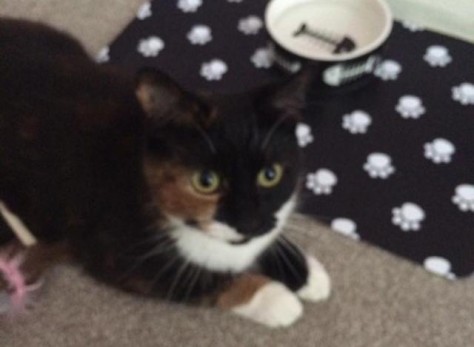 Ruby and her friend (or possibly mother — we never found out) Meg joined our family on June 25, 2016. I was still posting my daily blog at that time, so there’s a permanent record of the joy we felt at them coming to live with us.

Ruby and Meg came from a local rescue. They hadn’t been mistreated or anything — their circumstances had simply changed at home, with someone apparently being allergic to them. As such, they were both quite friendly when we first met them; Meg was supposedly “the shy one” (though she has since disproved that fairly comprehensively) while Ruby was the one who got out of her container and had a good wander around while we were meeting them for the first time.

Both cats settled in quickly and made it clear they were very comfortable in our house. They established their personalities pretty quickly, too; Meg was very much the dominant one (as you might expect from the older of the two — and possibly Ruby’s mother) while Ruby was a lot friendlier.

The notes we have from the shelter about Ruby notes that she enjoyed “headbutting for attention”, and this is something she always liked to do. Often in the middle of the night, when she would come and stand on me and demand attention just while I was trying to get some sleep. I never resented her for it, because I could feel the love coming from her… and I returned it in kind.

Ruby was a very affectionate, physical cat. She liked to sit with me on the sofa while I was playing games, preferably pressed up against my leg so she could have some bodily contact. (Those of you who read my Nekopara features from last year may recall me making reference to this!) I always took the time to give her some attention, and she became quite attached to me as a result.

In fact, it became very clear that I was an important figure to her. She would follow me around the house, and my wife Andie would interpret her plaintive little meows while she was the only human in the house as her asking where I was. Ruby’s behaviour would seem to confirm that theory; she behaved very similarly either when she didn’t know where Meg was, or when she didn’t know where I was. 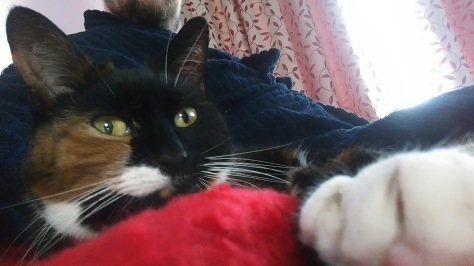 If you’ve never had a pet like a cat, you may feel like this is ascribing very “human” characteristics to something that is very much not human, and so I don’t necessarily expect everyone to understand how important that feeling of being loved by Ruby was. But it was there; I recognised it, I understood it, I felt it. It was real.

I grew up with cats in my childhood home — first Penelope (who is commemorated in one of this site’s mascots), who passed away peacefully in her sleep of old age, then Kitty, who sadly went much the same way Ruby did today — and it didn’t take me long, even as the anxiety-ridden, Asperger’s-fueled wreck I’ve been for my whole life, to recognise that if you give love to a cat, you will receive love in return. Like people, some cats are more open about this love than others; I’ve been fortunate enough to always have cat companions who were very open about it. 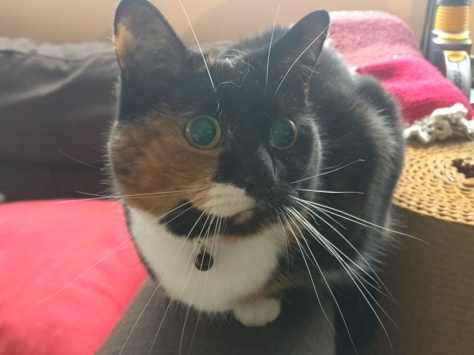 Ruby wasn’t perfect. (Who is?) But her flaws made her endearing. She didn’t really know how her feet worked, meaning she often left her claws out when she didn’t mean to. She had an apparently quite common condition with her eyes that meant she tended to be “wide-eyed” a lot of the time when under artificial light. And while she wasn’t too bad at climbing up things, climbing down tended to present some difficulties.

One morning I was awoken at about 5am by the sound of anxious mewling outside the bathroom window, only to discover Ruby had found her way onto the roof of our extension, but wasn’t sure how to get down. I recruited Andie to go up the stepladder and retrieve her; I am not confident on ladders at the best of times, and perhaps more importantly don’t trust my regrettably considerable girth and mass on relatively flimsy stepladders. Andie later told me if she wasn’t half-asleep at the time, she would not have been up that ladder! Still, all ended well. 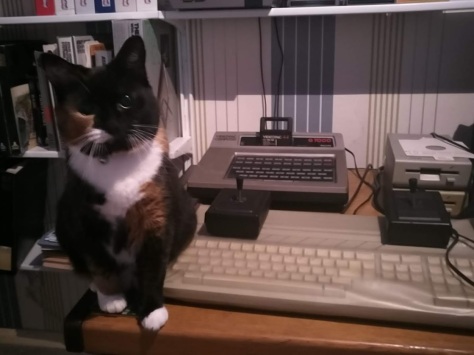 Ruby always liked to see what we were doing. She “helped” Andie lay a new carpet in her study, and she would often come and sit with me when I was playing with the Atari ST or the Philips G7000 in my study, as seen above. These visits weren’t always convenient, but they were never unwelcome. I was always happy to drop what I was doing for some cat fuss.

I think that’s going to be the hardest thing to accept; sitting down to do something that we know would have been a situation where Ruby would have joined us, and her no longer coming to “help”. Meg occasionally plays a similar role, of course, but she’s never been quite as “in your face” as Ruby would be. Except at bedtime. Meg likes cuddles at bedtime. 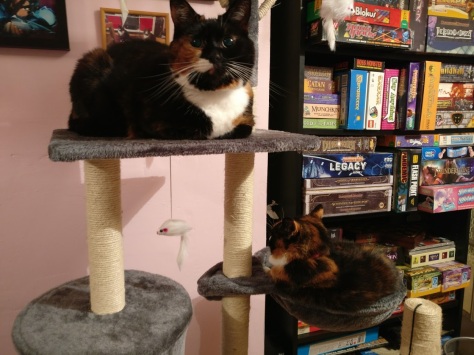 Ruby was our precious friend, our beloved companion and an irreplaceable member of our family. She will never be forgotten, and many tears have already been shed over her passing. There will almost certainly be more, too.

Rest in peace, my darling Ruby. You told us loud and clear that you had a happy life with us, as tragically brief as it ended up being. I hope that you sleep peacefully and find just as much happiness wherever you end up next. Please watch over us; you will forever be in our hearts.