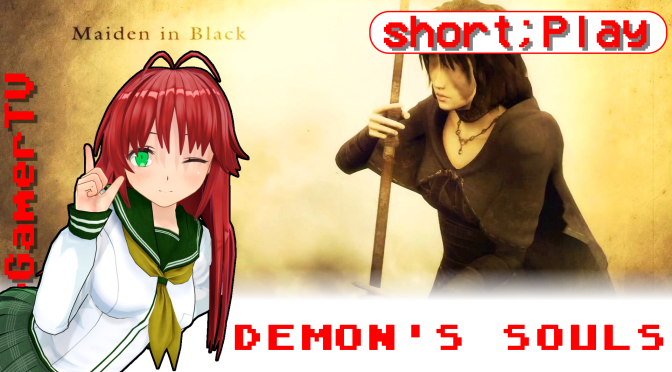 I’ve held off on exploring the Souls series for quite some time, because I know you need to invest a bit of time and effort to “git gud”, as the kids say.

Well, just recently I started to make that effort. And wouldn’t you know it — I’m having a good time! So much so that, having been enjoying Demon’s Souls on PS3, I went and picked up the whole Dark Souls trilogy for PS4 in a nice box set ready for some indeterminate point in the near future.

In the meantime, enjoy my experiences as a relative newcomer to the Souls series in the video below — and don’t forget to subscribe on YouTube for more!

I’ve been playing a bit of Demon’s Souls recently. I’ll talk more about my experiences specifically very soon, but I thought I’d devote today’s Waifu Wednesday to one of the most striking figures in the game: the Maiden in Black.

If you’ve never played Demon’s Souls, the tutorial will almost certainly kill you, at which point you will encounter the Maiden in Black for the first time. She will helpfully inform you that it’s now your job to ensure that the “world be mended” and that she can help you get stronger — but not until you’ve gone and beaten a big slobbering horrible demon in the game’s first stage.

Well, I guess there’s nothing like a woman who sticks to her principles, huh?

END_OF_DOCUMENT_TOKEN_TO_BE_REPLACED

Have you heard the tale of FromSoftware, dear reader? Legend has it that long ago, in the dim and distant past, these renowned scribes were more than just “the people who made Souls games”.

Joking aside, the company’s past output is quite a bit more diverse than you might expect if you only became aware of it in the last couple of console generations. In particular, the first two PlayStation eras represented FromSoftware at its most experimental, with its games running the gamut from Souls’ spiritual predecessor King’s Field to mech sim series Armored Core.

Perhaps the most surprising of FromSoftware’s games from this era, though, given their present reputation for “dark and moody”, is a rather peculiar PlayStation 2 game released in Japan and Europe as Kuri Kuri Mix, and The Adventures of Cookie and Cream in the States.