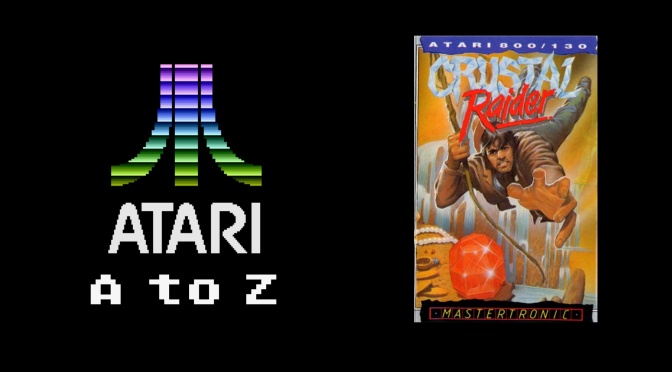 Crystal Raider from Mastertronic is not a game I’d come across prior to recording this video, but it seems it was rather fondly regarded back in the day — and likewise a lot of people today seem to like it, too.

It’s an interesting puzzle-platformer with a peculiar jumping system similar to that found in Atari’s arcade title Major Havoc: so long as you hold the fire button down, you continue the upwards arc of your jump. Mastering the crazy moves you can do with this is essential to success — and Crystal Raider certainly demands some inhuman agility at times! 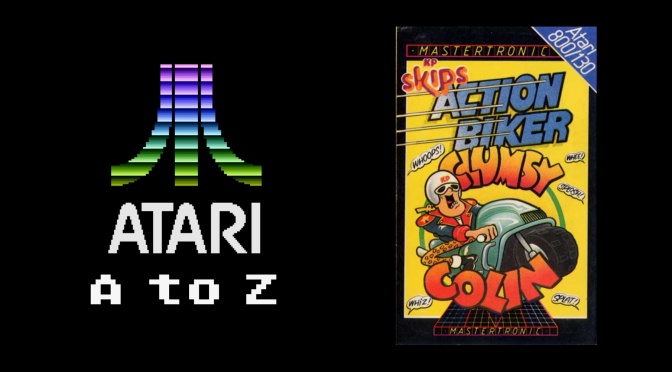 Sponsored video games are nothing new! One of the earliest I ever came across was Action Biker by Mastertronic, supposedly developed in collaboration with KP Skips, the melt-in-your-mouth prawn cocktail flavoured corn snack.

KP Skips had a mascot named Clumsy Colin, who was the main star of Action Biker, and the game challenged you to control Colin as he attempted to find all the bits for his bike and then compete in a drag race. It’s an early “open world” game of sorts, and is a bit of a “love it or hate it” affair — particularly when it comes to the music. Oh, the music.

I’ve never really seen the point of slot machine games. You don’t win anything, you don’t risk anything and the level of interaction between you and the game is minimal at best.

That didn’t stop lots of developers from putting them out in the early days of home computing, though — and in the grand scheme of things, Mastertronic and Sculptured Software’s Vegas Jackpot for Atari 8-bit is probably one of the better ones. There’s still very little reason to spend your time on this today though!

The origins of the open-structure 2D platform game tend to be traced back to console games such as Castlevania and Metroid these days, but it was always a popular way to put a game together back on 8-bit computers, too.

Games such as today’s title, Mastertronic’s Universal Hero, tended to be known as “arcade adventures” back in the ’80s, thanks to their blend of traditionally arcade-style mechanics with the conventions of adventure games, such as exploration, puzzle-solving and object manipulation. While they didn’t always get that blend quite right, it certainly made for some interesting and challenging games!

Check out Universal Hero in the video below, and don’t forget to subscribe on YouTube for more! 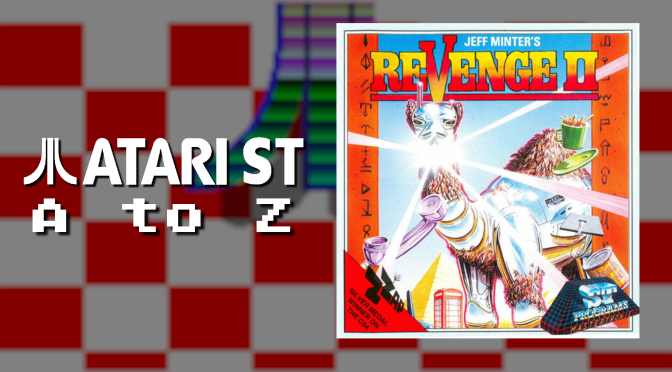 Such is the case with Revenge II, also known as Revenge of the Mutant Camels II or Return of the Mutant Camels. While Minter was responsible for the original versions of this game, the ST port was handled by a separate team and the game was published via Mastertronic.

Just because Minter wasn’t directly involved doesn’t mean that this isn’t a ridiculous, psychedelic trip of a game, however…

You may recall a little while back that we saw the Atari 8-bit version of Mastertronic’s Ninja. Well, here’s the ST version!

It’s basically the same game at its core, though it runs a little faster and has much nicer graphics. It also has a new theme tune that plays in between fights. It’s a great example of the additional power the ST brings to the table over and above its 8-bit predecessors, even if it’s not the best or most imaginative game out there.

For the unfamiliar, Ninja is an interesting combination of action adventure, beat ’em up and fighting game. You must work your way through a series of screens, beating up anyone in your way in a series of one-on-one fights, and ultimately prove your worth as a ninja master. All in a day’s work, right?

Kick, punch, it’s all in the mind! Pushing diagonally backwards and up while holding the fire button to swing your sword, however? Somewhat less intuitive…

Enter Mastertronic’s Ninja from 1986. This was a game developed by Steve Coleman (who was previously responsible for Pharaoh’s Curse, which we’ll be coming to in a few weeks) that combines open-world 2D adventuring with a fusion of one-on-one fighting and beat ’em up mechanics to produce something altogether unique.

Ninja was a game of “firsts” for me growing up. It was the first time I saw a ninja and learned what it was. It was the first time I saw (and learned the name of) a lot of pieces of traditional Japanese architecture such as torii gates. And it was one of the first games I played where fighting mechanics were a little more complex than simply mashing the fire button to do a single type of attack. It’s still pretty fun, too… though it puts up a lot more of a fight than I remember!

Follow Atari A to Z on its own dedicated site here!

Deep in the seventh galaxy of the Nebulus system, a lone warrior has been selected from thousands to perform an unenviable task: to save the beautiful Princess Chardonnay from the clutches of the evil Disgusmatrons.

Thus begins the rather overblown story to Mastertronic’s Chase, an Atari ST title shamelessly attempting to ride the coat-tails of the popular Star Wars arcade game with its transparent vector graphics and arcade-style thrills.

As with most titles from the era, the story was completely and utterly irrelevant… but that didn’t mean that the game experience itself was lacking. On the contrary, despite the game’s simplicity and its rather bare-bones presentation, Chase is an oddly addictive little affair I still enjoy booting up for the occasional blast-and-dodge session even today!

Follow Atari A to Z on its own dedicated site here!