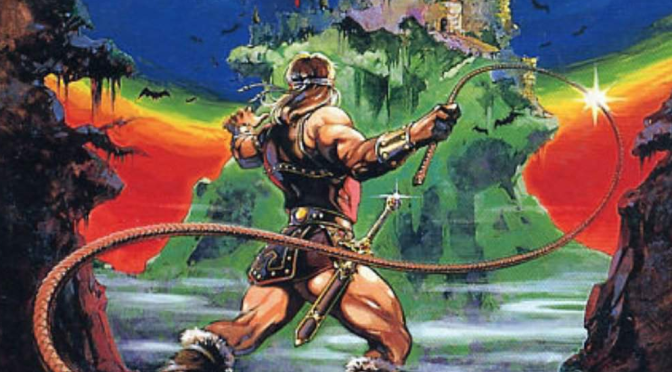 One of the nice things about revisiting old games from a modern perspective is the fact that you can see how certain genres have evolved over time… and sometimes seemingly morphed into different things altogether.

The original Castlevania is a great example of this. Far from being your common-or-garden everyday mascot platformer that we saw a fair bit throughout the 8- and 16-bit home console eras, Castlevania provided an experience that was altogether its own thing, immediately recognisable and immensely influential.

Atmospheric, idiosyncratic and consistently challenging, it’s a game that still holds its own today — just don’t expect an easy ride!

I first played Castlevania back when it was “current”. I never had my own copy, though, so I rarely got to play it for very long at a time, and consequently up until Konami’s recent release of the Castlevania Anniversary Collection for various platforms, I didn’t know a lot about the stages beyond the first “block”.

I did, however, know that Castlevania was hard. I knew that it had “weird jumping” and bizarrely heavy gravity. I knew that it had a distinctive and unusual weapon: a whip. And I knew that for some inexplicable reason, hearts were not a means of restoring your health, but rather a means of powering a series of special weapons that could be triggered through the slightly awkward “up and B” combination.

Armed with this knowledge, I jumped in to this first installment with a certain degree of trepidation… and what little experience I had with the game soon came flooding back. 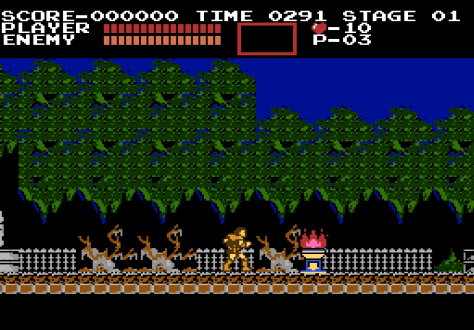 The early stages provide you with some relatively risk-free training that arm you with some of the skills you’ll need to survive later. The mindless zombies in the opening corridor, for example, teach you that enemies will often come from both sides, and that there is a distinctive “rhythm” to your whip attacks. In other words, you can’t just hammer the attack button and hope that you’ll hit something — you need to observe your enemies’ patterns and time your strikes carefully.

In the case of these zombies, that’s easy enough to do; they rise up and move at a constant speed towards you, so all you need is an understanding of how much distance the whip covers (ideally at all three of its different power levels) to know when you can safely strike to clear yourself a path or keep your back clear of threats.

At the same time, though, these early scenes teach you that you have to play in a somewhat assertive manner; hang out in one spot whipping zombies either side of you and you simply won’t make any progress. Instead, you need to clear out the enemies in your way and advance when you can, then repeat the process. 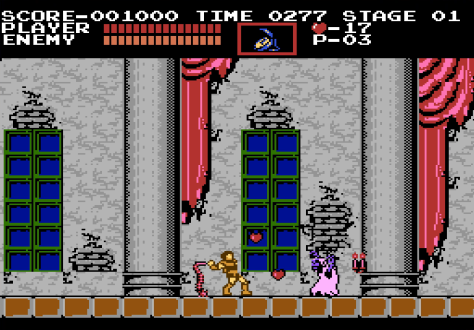 Each enemy has its own distinct “rhythm” that allows you to do this, and as you gradually start to encounter more different types of enemies with different ways of moving, you’ll start to pick up on these patterns — and the knowledge of whether it’s even worth trying to defeat an enemy, or if you should simply slip past when there’s an opening.

A great example of this aspect comes in the form of the widely despised Medusa heads, which first put in an appearance in the second block of stages. Something you’ll need to adjust to quickly in Castlevania is the fact that if you try to take out all the enemies, you’re going to make life more difficult for yourself; instead, faster, safer progress can be made if you observe the Medusa heads’ sine-wave movement pattern and either position yourself in a safe spot before moving, or jump over them while they are ascending or descending the wave.

Each new enemy you encounter in the game acts in this way. When you first encounter them, it might appear impossible to escape without taking any damage, but a little observation, experimentation and practice will soon teach you that there’s a way through every challenge, however seemingly impossible it might be. This type of game design can still be seen regularly in modern games that demand precision and perfection from the player, such as From Software’s titles. 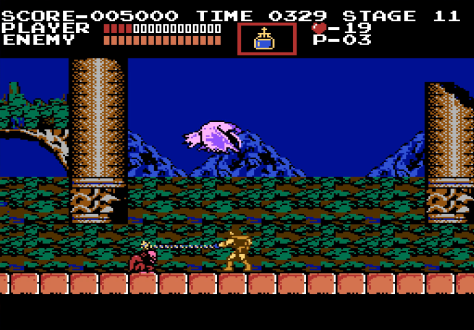 The most potent example of this from my own experience with this most recent playthrough comes in the fourth block of stages, where there’s a sequence that simply involves running to the right. No platforming, no stairs, no jumping — just a straight path to the right.

The twist is that as you proceed to the right, eagles are constantly flying in from both sides and dropping Hunchback enemies, who have an awkward movement pattern that involves leaping at you too quickly for you to be able to respond with the relatively sluggish whip attack. Instead, knowing this behaviour, you need to pre-empt their leap, and ensure that your whip is right in the arc of their jump as they make it — or better yet, pre-empt them altogether by hitting them with your whip as the eagles are dropping them to the ground.

As you progress deeper into the castle, the game punishes you more and more harshly for mistakes, primarily through increasing the amount of damage you take with each passing block of stages. By the fifth area, you’re taking at least four “pips” of health with every hit, meaning you can take at most four hits before dying. Health recovery items are few and far between, too, so understanding of enemy patterns, memorisation of enemy placement and simple practice is essential for success — reach a boss with a sliver of health left and you’re probably going to have a bad time. 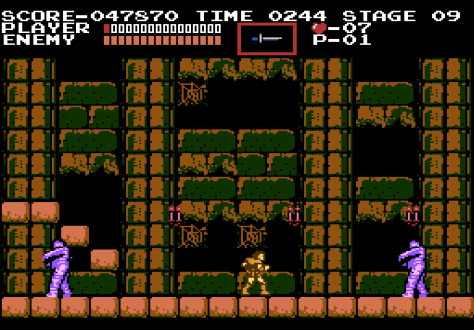 And this isn’t even getting into the boss fights themselves or the platforming aspect of the game… but we’ll save those discussions for another day!

For now, suffice it to say that I’m having a real good (if expletive-filled) time with Castlevania, and anyone with a hankering to rediscover this classic (or perhaps try it for the first time!) should absolutely pick up Konami’s excellent Castlevania Anniversary Collection with confidence; it’s an astonishing value package featuring some all-time classics of gaming.

9 thoughts on “Delving Into Castlevania – #1”