Triangle Service is not exactly what you’d call a household name in the shoot ’em up sector, but over the years they’ve been quietly beavering away to produce some enjoyable, addictive games.

Probably their most well-known output is their Zeal series, which consists of XIIZeal (actually a port of a PS2-era shoot ’em up called XII Stag), ΔZeal (pronounced “Deltazeal”, not “Trianglezeal”, as I referred to it for a long time), Trizeal and Exzeal — but you may also have stumbled across their more unusual titles such as Shmups Skills Test and Minus Zero at some point in the past.

Today we’re going to take a look at Exzeal, released for Xbox 360 as part of the Shooting Love. 200X compilation (which, pro-tip, is not region-free in its physical incarnation, unlike many other Xbox 360 shmups — including its stablemate Shooting Love. 10-shuunen) and subsequently for PC via Steam.

For the unfamiliar, Triangle Service was originally founded in 2002 by Toshiaki Fujino, a former Konami employee. The company’s first game was the aforementioned XII Stag, which was released in both arcades and on PS2 in the company’s year of inception. (The PS2 version, unusually, came to Europe but not North America.) This was then followed by Trizeal for Sega’s Dreamcast-esque NAOMI arcade hardware in 2004, with a Japan-only home port for Dreamcast appearing the following year.

The first use of the Shooting Love brand came in 2006 with a PlayStation 2 release of Trizeal, now rebranded Shooting Love: Trizeal, and this was followed a year later with Shooting Love. 2007, an unusual arcade release in that it was actually a compilation featuring both Exzeal, the subject of today’s article, and Shmups Skills Test, which we’ll doubtless explore another time.

Did you follow all that? Good. Let’s look at Exzeal.

Exzeal is a vertically scrolling shoot ’em up featuring a vertically oriented screen and polygonal visuals for both its backdrops and its gameplay objects. You are able to choose between four different ships at the outset (with a fifth secret one locked away), each of which has its own distinctive means of attacking, and from there you must proceed through a series of stages, defeating multi-phase bosses and attempting to score as many points as possible in the process.

Pretty conventional, I’m sure you’ll agree. The main interest in Exzeal comes from its more subtle mechanics, and particularly how its scoring system varies considerably between the four different ships.

The first two ships are variations on a theme. Tapping the fire button (or holding the helpful “rapid fire” button generously provided, a godsend for those who value their fire button fingers) shoots a narrow but relentless barrage of shots straight ahead of you that will eventually destroy most things. Holding down the normal (not rapid) fire button, however, will charge a shot, with the shot charging more quickly if you wiggle the stick around while holding the button. 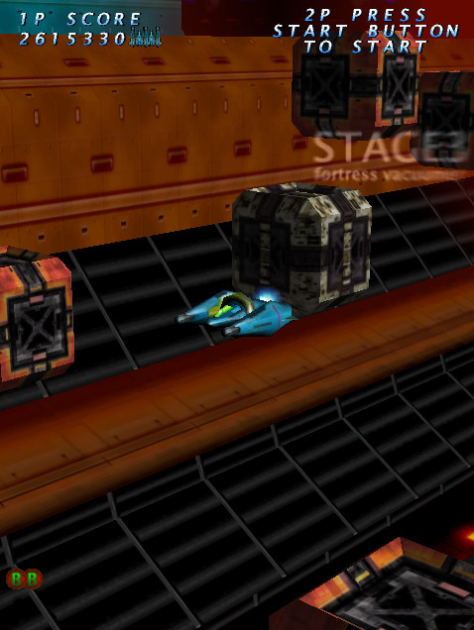 When unleashed, the shot will fire according to which ship you are flying: the first will blast out a piercing shot directly in front of itself, with a score multiplier building up to a maximum of 16 with every enemy it passes through on the way up the screen. The second explodes out in five directions, allowing you to potentially hit things behind you or at least not directly in front of you; again, a multiplier will build with more enemies hit simultaneously.

The third ship type demands that you play in a completely different way. It totally lacks a charged shot altogether, instead only having a straight, forward-facing shot. The twist here is that the score multiplier goes up to a maximum of 8 according to how close an enemy is when you destroy them. This includes bosses, so although the multiplier only has half the potential maximum value, you should be able to score bonuses more consistently if you’re willing to take a few risks. This is the most mechanically straightforward of the four ships, but demands the ballsiest flying to achieve good scores with.

The fourth ship makes a return from XII Stag and XIIZeal, and has its own unique mechanics pulled directly from that game. Probably the most interesting thing about this ship is that it has “melee” attacks of sorts; it can attack to the sides by waggling the stick in alternate directions, and is also able to destroy enemies behind it with the flame from its engine. Once again, score multipliers are awarded for defeating enemies using means other than the standard front-facing shot. 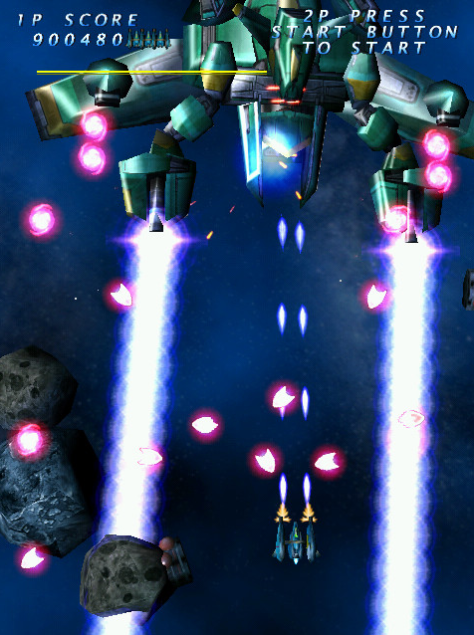 Exzeal is relatively light on the bullet patterns compared to some of its contemporaries, but it provides a lot of interest and variety through its stage gimmicks. At various points, you’ll be firing at physics-based enemies in order to rotate them so their weak point is reachable, clearing crates out of your path (while enemies do their best to shove them right into your path) and gripping your controller with white knuckles as you gradually accelerate through a densely packed fleet of capital ships, none of which are terribly keen to get out of your way.

Bosses, too, are interesting and unusual, often featuring several destructible elements that don’t directly affect their health bar, but whose absence would almost certainly make your job a bit easier — as well as providing some hefty bonus points if you can blast them off using the appropriate multiplier mechanics for the ship you’re piloting at the time.

Presentation-wise, Exzeal isn’t much of a looker, with fairly simple models and ship designs atop pretty bland backdrops. But it does move along at a fair old clip, and the simplicity of the visuals makes it difficult to get “lost” on the screen, even when the action becomes chaotic. This is very much a good thing in a game like this — particularly if its mechanics encourage you to take risks.

Sound-wise, the game fares much better, with some pleasingly throbbing electronic music tracks accompanied by some meaty lo-fi explosions and the drone of your rapid-fire bullets. The final stage features a vocal track, and the name entry screen for high scores has an endearingly little jazzy number to make you feel a bit better about exploding into a million pieces in embarrassing fashion.

Exzeal’s by no means a classic or anything, but it is a really enjoyable, accessible shoot ’em up with plenty of mechanical interest and lots of longevity for score-chasers. With four different ships plus the (fifth secret one) and five difficulty levels  there are plenty of ways for you to show your skills, and dedicated per-stage Score Attack modes allow you to analyse and refine your performance to be the best it possibly can be.

So while it’s probably never going to go down in history as one of the greats, it’s definitely a shoot ’em up that is worthy of your time — and one that I keep finding myself going back to long after I should be getting on with something more productive!

One thought on “Shmup Essentials: Exzeal”