The MoeGamer Awards are a series of “alternative” awards that I’ve devised in collaboration with the community as an excuse to celebrate the games, experiences and fanbases that have left a particular impression on me in 2018. Find out more here, but you’re out of time to leave suggestions, I’m afraid!

Well, here we are once again on the last day of the old year, awaiting the arrival of the new. And, of course, that means one thing for anyone interested in games: the completely arbitrary declaration of “Game of the Year”.

Everyone has different criteria for selecting their own personal Game of the Year. For some, it’s simply the game they enjoyed the most or which took over their life to the greatest degree. For others, it’s to do with technical or artistic achievement. For others still, it’s all about sales figures.

For me, it’s quite simply the game I played this year that I feel was… “best”, across all its various aspects. A game that is a real showcase of just what is out there today, and which I feel is a shining example of what being interested in video games really “means”. 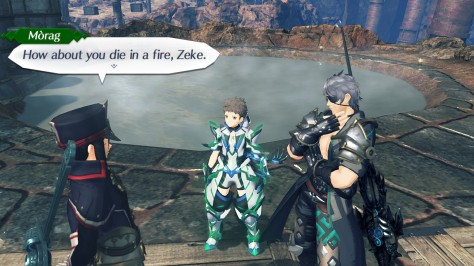 Up to us to redress that balance, then, because Xenoblade Chronicles 2 is most definitely worthy of celebration as an absolute masterpiece for a whole variety of reasons.

For the unfamiliar, you can always read up on the game in the detailed Cover Game feature it had here on MoeGamer this year, but for those too lazy to do that, here’s the gist. 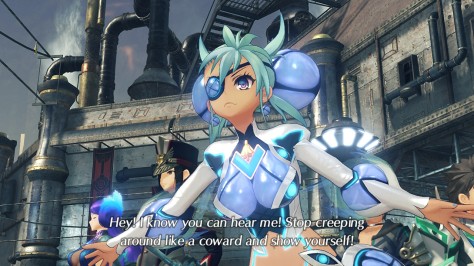 Xenoblade Chronicles 2 is, like its two immediate predecessors, a Japanese take on the open-world RPG. The Japanese approach to this subgenre tends to distinguish itself from its Western counterpart in a number of ways, most notably by the fact that you play a predefined protagonist rather than a self-designed avatar, and that there’s a much stronger emphasis on the importance of the core narrative as opposed to a map peppered with miscellaneous “things to do”.

That said, this isn’t to say that Xenoblade Chronicles 2 and games like it are linear experiences, however. At any given point, you have a wide variety of activities to engage with; progressing through the main narrative simply expands that array of options by allowing you to visit more places, make use of more game mechanics and recruit additional members to the party. You’re free to choose the pace at which you progress, however; if you like “clearing out” an area of sidequests before moving on, you can do that — though you’ll probably have an easier time coming back at a higher level in some instances — while if you just want to power through and unlock the majority of the world before clearing up side activities to your satisfaction, you can do that too.

One of the best things about Xenoblade Chronicles 2 for me was its progression system. Besides the sort of thing you expect from most RPGs — experience and levels, plus points to spend on other abilities — there’s an Achievement-esque system that rewards you for engaging with in-game activities that particularly appeal to the “Blades” who play such an important role in the story. Both the original Xenoblade Chronicles and Xenoblade Chronicles X had a full-on Achievements in place, but the difference with how Xenoblade Chronicles 2 handles this is the fact that accomplishing these tasks actually has a marked effect on the game mechanics in some way rather than simply providing you a checklist of things to do. Some tasks might unlock new abilities that you can use in various ways; others might power up your Blades and make them more effective.

This type of progression in the game is also a means of providing some non-verbal characterisation to the various characters you interact with over the course of the game. Through this system, for example, you can learn about a Blade’s favourite food, the activities they get up to when they’re “off duty” and even how they interact with other party members. Some of the objectives are even dependent on those of other Blades, making the characters feel like they have believable connections with one another rather than just being “collectibles”.

I also really enjoyed Xenoblade Chronicles 2’s combat system. While I wouldn’t fault anyone for finding it initially baffling, once you unlock all the core mechanics, it becomes an immensely satisfying affair that combines the thrill of real-time interactivity — though without ever crossing that line into “action RPG” — with good use of strategy and tactics. There’s a strong emphasis on making good preparations for battle before challenging a tough monster — choosing the right combination of Blades, abilities and even the food you down before you set out is important to success in many cases.

What’s also rather enjoyable is the ability to take control of any of your other party members besides protagonist Rex, too. In some cases, this is necessary to unlock particular abilities that require you to manually trigger certain situations (usually during battle), but it also provides some variety in how the game “feels” to play. Characters fall into distinct “roles” of tank, attacker or healer, and each archetype has its own specialised abilities. That said, this isn’t a strict MMO-style “holy trinity” — healers are just as capable of laying the smack down on an opponent as an attacker, it’s just a lot of their abilities tend to focus on keeping the party in good condition rather than making huge numbers appear.

Couple these satisfying mechanics with an enormous, beautifully designed world that is an absolute joy to explore, an absolutely loveable cast of main characters who are among my favourite ensemble lineups of all time (<3 Poppi), and a dramatic, thought-provoking story, and you have a game that is truly, truly special.

Xenoblade Chronicles 2 is an absolute masterpiece, standing head and shoulders above everything else I’ve played in the last year. If you have a Switch, get it. If you don’t have a Switch, get one for this. If you’re still not convinced, go read more here. And at some point in the new year, I’ll find some time to cover the official expansion Torna: The Golden Country and the Season Pass DLC that has been added to the base game since its launch!

There’s my Game of the Year 2018. What have been some of your favourite experiences this year?