While, as the name suggests, a significant part of Atelier Firis: The Alchemist and the Mysterious Journey is about Firis going on her journey of self-discovery, it is still an Atelier game — and as such you’ll be spending plenty of time crafting items.

Atelier Firis doesn’t completely reinvent the alchemy mechanics from Atelier Sophie: The Alchemist of the Mysterious Book, but it does feature some new twists on the formula established in that game. Once again we have the series’ classic “bung everything in a pot and see what comes out” base combined with some almost puzzle game-esque mechanics — and the result is an enjoyable, satisfying alchemy system.

Get your apron and your stirring stick, then — it’s time to take a closer look. 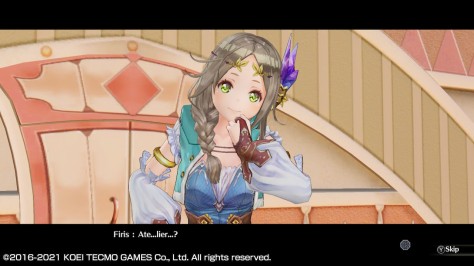 As we’ve seen numerous times over the course of the series as a whole, the Atelier series has never strayed too far from its roots in terms of the fundamentals of its alchemy mechanics — the main difference between different installments is exactly how those fundamentals are implemented.

At its core, Atelier Firis’ alchemy gameplay is still about acquiring recipes, then using those recipes to produce various items. But as with most other Atelier games, Atelier Firis has its own distinct way of doing things for all of these base components.

Let’s take the acquisition of recipes as an example. While you can learn recipes from books in Atelier Firis, as in numerous previous installments, they’re relatively few and far between. Instead, the majority of Atelier Firis’ recipes are discovered naturally and organically as you play. 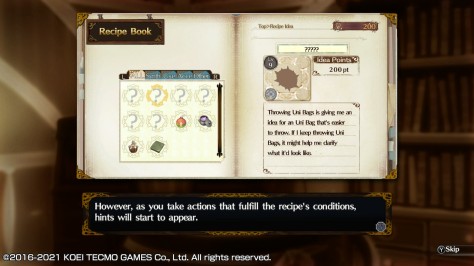 What I mean by this is that as you explore the world, gather items, fight monsters and reach particular locations, Firis will occasionally be inspired to come up with a new recipe. There are absolutely tons of different triggers for this to happen, so you’ll find that simply playing through the game — particularly in its early hours — results in a seemingly constant string of discovering new recipes.

In execution, this mechanic takes a few elements from Atelier Iris 3: Grand Phantasm’s recipe idea system, whereby upon levelling up, deuteragonist Iris would come up with a few vague ideas for recipes and then usually have to find a particular landmark or object throughout the game world in order to flesh that out into a full recipe.

It also takes some inspiration from Atelier Shallie: Alchemists of the Dusk Sea’s Life Tasks mechanics, in that as you work your way through the game, Firis will have vague ideas as well as specific recipe ideas, and in order to flesh these ideas out you’ll have to perform specific actions. While all you had to do in this regard in Atelier Iris 3 was find the location referenced in the hint, in both Atelier Shallie and Atelier Firis, the actions can also involve fighting particular monsters, gathering a particular number of items or crafting a particular number of items.

Atelier Firis does also offer an alternative means of unlocking recipes besides repeatedly performing trigger actions, too. Completed quests reward Firis with “Idea Points”, which can be used to fully unlock any of the recipes that are currently in the “vague idea” phase. In other words, if you’ve already gathered 50 of a particular rock that looks like it might lead to a recipe for a useful bomb and you want said bomb right now rather than an indeterminate number of gathering sessions later, you can simply use Idea Points to skip the grind and unlock the recipe now.

Of course, Idea Points are limited in that you can only acquire them through quests, but there are plenty of quests to take on as you explore Atelier Firis’ world. But at the same time, in the early portion of the game you also have to bear in mind that you’re on the clock — while an in-game year might seem like a long time when you’re first starting out, you’ll be surprised how quickly the time can pass by while you’re exploring, gathering and fighting.

It’s very much worth making use of the optional “Wonderland” costume that comes with the DX version of Atelier Firis to reduce the amount of time taken by exploration and crafting if you’re concerned.

Once the time comes to actually make use of Firis’ alchemy and craft some of those recipes she’s been thinking of, we’re presented with a familiar interface that looks somewhat akin to Atelier Sophie’s crafting system, albeit with a few differences.

There are several steps to the alchemy process in Atelier Firis, and producing good quality items with desirable effects demands that you pay attention to all of them. None of them are super-complicated in their own right — but much like in past Atelier games, the interesting thing is how they all interlock and work together to produce varied and interesting results.

The first and simplest step is, of course, picking what you want to craft. In Atelier Firis, recipes are level-locked, meaning that Firis can’t even attempt to craft them until her alchemy level is high enough. Interestingly, you can potentially unlock some fairly high-level recipes relatively early in the game; thematically, this represents Firis having some ideas beyond her own capabilities, and reaching a point where you can finally craft these things is a significant milestone in both gameplay and narrative terms.

In order to begin crafting a recipe, you, of course, need the appropriate ingredients — and like all Atelier games from Atelier Rorona: The Alchemist of Arland onwards, many of these recipes simply call for a particular category of ingredient rather than a specific ingredient, allowing for some flexibility in how you put something together.

Each recipe displays its possible effects before you start crafting — though you won’t necessarily know the exact details of what each effect is immediately. The effects are represented on coloured meters with pips and stars — pips don’t do anything, but stars represent a new effect, with the effect usually becoming more powerful the further down the meter you progress.

You have several more of the 35 point red items, so you add a couple more. This brings your red meter to its first star, which unlocks an effect, but it also brings the blue and purple meters to one and a half pips. You can see that there’s an effect on the purple meter at two full pips, so you throw in another 35 point red item for a full pip of red and half a pip of blue and purple; now you’ve also unlocked the effect on the purple meter. Unfortunately, purple meters more often than not have negative effects, so you’ll need to account for this when choosing ingredients.

Choice of ingredients isn’t the only means you can build up the level gauge and the coloured meters. Like in Atelier Sophie, once you’ve selected all your ingredients, you need to place them on a grid — and the more ingredients of a particular colour on the grid, the higher the bonus to their contribution to the level gauge. With careful arrangement, you can manipulate the meter values to your advantage. 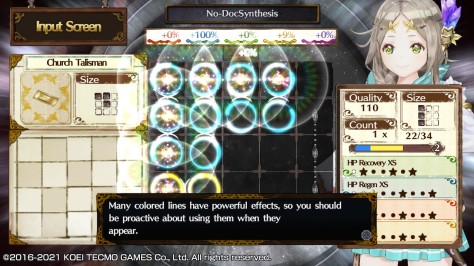 As the game progresses, you also obtain the opportunity to craft using catalysts; these take the place of the different cauldrons that Sophie could use in her game. Catalysts provide different grids on which to arrange the ingredients; some are larger or smaller, and all have a certain arrangement of “bonus panels” which, if covered with ingredient tiles, will cause various effects on the recipe. These can include manipulating the quality level, changing the value of the coloured meters and adding additional effects or traits, so if you’re trying to make the best possible items, sensible use of these is very important.

Finally, with each successful craft, Firis earns skill experience for that specific item and, in some cases, closely related items — making a fancy ingot also makes her better at making standard ingots, for example. As she levels up from bronze to silver to gold skill with an item, she is able to produce better quality items as well as craft more efficiently.

For example, she may be able to transfer traits from ingredient to final item without having to use bonus panels, or she might be able to actually rotate and flip the ingredient tiles in order to fit them in more effectively on the grid. She may even be able to produce more items in one go, which is extremely useful for quests or recipes which require a large amount of a particular alchemical ingredient to be crafted. 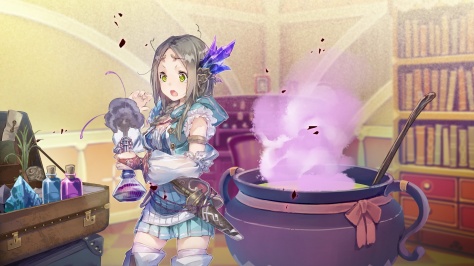 As always for the Atelier series, this might sound quite complicated on paper, but the game introduces new mechanics at a good rate so the whole thing actually ends up feeling rather intuitive before too long. And those coming directly from Atelier Sophie will be right at home — there are enough common elements to make it recognisable and understandable for fans of that game, but enough unique elements to make it stand out and feel like an evolution rather than recycling.

I will warn you in advance, though — you might want to get used to crafting ingots and planks fairly early on, ’cause you’ll need a whole lot of them before you know it…!

More about Atelier Firis: The Alchemist and the Mysterious Journey
More about the Atelier series

One thought on “Atelier Firis: The Alchemist and the Mysterious Journey – Mix and Match”