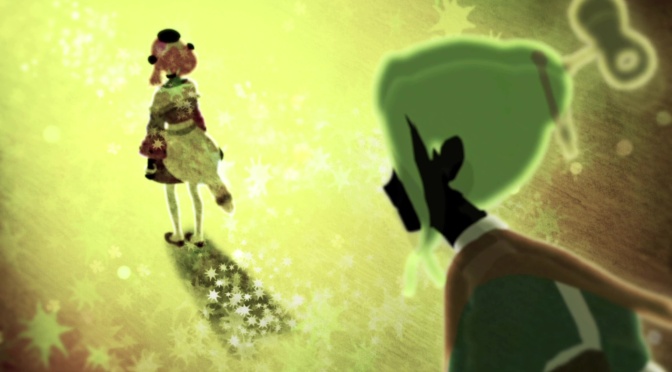 After the emotional journey that was Atelier Ayesha: The Alchemist of Dusk, Atelier Escha & Logy: Alchemists of the Dusk Sky followed a year later. This time we were promised a pair of playable protagonists — something we hadn’t seen in the series since Mana Khemia 2: Fall of Alchemy.

This time around the two “paths” through the game are less noticeably different from one another than they were in Mana Khemia 2, due to the fact that the two protagonists spend most of their time alongside one another. It’s still worth playing both routes, however, as not only do you get to “hear” the innermost thoughts of each protagonist in their own respective route, there are some endings that can only be seen by one protagonist or the other.

But we’re getting ahead of ourselves! What exactly is Atelier Escha & Logy, and how does it fit in to the Atelier series as a whole? Read on and let’s find out together.

Before we go any further, let’s address the name of this game, because it’s actually a bit of wordplay that doesn’t work at all in English. Or rather it does, but only from a perspective of English viewed through a Japanese lens.

In Japanese, there are a few different ways of saying “and”, but the one you’ll probably come across most frequently is the particle と (“to”, pronounced a bit like “toe” with a clipped ending). Confusingly, と can actually be used for four completely different and distinct purposes, but the only one we’re concerned with here is its use to make a list of two or more items; essentially, what we do in English when we say something like “Escha and Logy”.

The astute among you will have noticed that this means the phrase “Escha and Logy” in Japanese would be pronounced “Escha to Logy”, which if you squish it together looks a bit like a word that should mean something — “eschatology”. It’s not a word that gets particularly common usage for reasons that will likely be obvious, but it absolutely is a word. It means “study of the end times”. You know, like the apparent impending (or perhaps currently occurring) apocalypse that is seemingly blighting the world of Dusk.

As an aside, understanding this bit of wordplay will also correct a common mistake many people make with pronouncing the characters names if they’ve never heard them spoken aloud; they are not pronounced “es-sha” and “low-gii” (with a hard “g”), but rather “es-ka” and “low-jee”. Because that’s how you pronounce “eschatology”. Now you know.

Anyway. Onto the game itself. In Atelier Escha & Logy: Alchemists of the Dusk Sky, you take on the role of either Escha or Logy as they start their new job. Both of them have been recruited by the local branch of the government for their alchemy talents; Escha is a local, while Logy hails from the mysterious “Central City” that we are yet to see in the series.

Both lead characters have quite different approaches to alchemy. Escha makes use of alchemy in the way we’ve traditionally understood it in the series up until this point: she throws things in a big pot and something else pops out after a day or two. Logy, meanwhile, makes use of a distinctly modern take on alchemy that is reliant on specialist equipment; consequently, upon his arrival at Escha’s somewhat backwater hometown of Colseit, he is a little frustrated to discover that he’s not actually able to really do his job for quite some time. 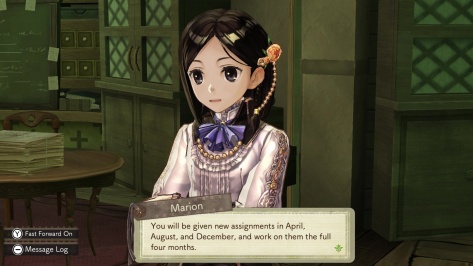 What follows is Escha and Logy being presented with a series of assignments from their manager Marion — yes, the same Marion from Atelier Ayesha — that will, she hopes, help her Research and Development department prove its worth and continue to receive a budget for future investigations.

The moment Escha and Logy step into the “office” in Atelier Escha & Logy, it’s clear that the game as a whole is intended at least in part as a bit of a satirical takedown of corporate culture.

Marion is depicted as a thoroughly nice young woman, just as she was in Atelier Ayesha, but also one who is perpetually drowning in paperwork — and forever doomed to be unappreciated for her hard work. The “big boss” of the branch initially comes across as someone who appears friendly on the outside, but carries with him an extremely intimidating aura. And the person with the real power in the office is the one who does the accounts. 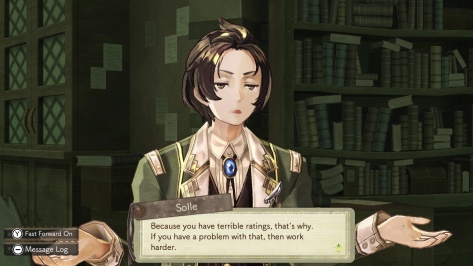 Much of the game’s good humour comes from Escha and Logy’s differing approaches to the various challenges that corporate culture presents them with. Escha, being an energetic and eminently practical type, struggles a great deal with the paperwork aspect of the job, for example, while Logy is clearly well-accustomed to myriad layers of unnecessary bureaucracy from his previous life in Central City. Neither of them like paperwork, but the difference between them is that Escha has a habit of either bursting into tears or procrastinating by baking an excessive amount of cakes when she’s confronted with it, while Logy just grits his teeth and quietly gets on with it.

Escha and Logy’s struggles in this regard will be immediately familiar to anyone who has ever worked an office job for a mid- to large-sized corporation. You may well have technically been hired for the one thing you’re actually good at, but as the weeks pass by it becomes increasingly clear that you have to spend just as much time — if not more — doing pointless nonsense that doesn’t really benefit anyone or achieve anything other than simply making everyone involved look busy. At least they haven’t invented Microsoft Teams in the world of Dusk, otherwise 90% of Atelier Escha & Logy would consist of virtual conference calls.

Thankfully, Marion, having worked in this sort of environment for quite some time even prior to the events of Atelier Ayesha, is all too familiar with how easy it is to get bogged down in ridiculous busywork, and is thus quick to set Escha and Logy about various tasks that will not only prove the value of the Research and Development department, but will also benefit the lives of those who are struggling in the Dusk series’ fading world.

We’ll explore the specifics of how the “assignment” system works in a subsequent part of this feature, but suffice it to say for now that the game is closest in structure to Atelier Rorona: The Alchemist of Arland more than anything else. The pair will be presented with something to achieve and a deadline by which it needs to be achieved; succeeding allows the story to continue, while failing brings the careers of our young alchemists to a screeching halt.

In Atelier Escha & Logy: Alchemists of the Dusk Sky, these assignments are rather varied, and don’t necessarily involve synthesising large quantities of something as was often the case in Atelier Rorona. Rather, they all feel like part of something greater: a significant aspect of the Dusk setting, seen in both Atelier Ayesha and Atelier Escha & Logy, involves the people living through these apparent “end times” attempting to understand the past through archaeology and related fields. Perhaps, by studying what came before, they can understand what is happening now; perhaps they might even be able to do something about it. No-one knows, but it’s an effort worth making.

With this in mind, sometimes Escha and Logy will be tasked with making something, while at others they will be sent to scout out particular locations, deal with ferocious monsters or investigate the cause of local disasters. 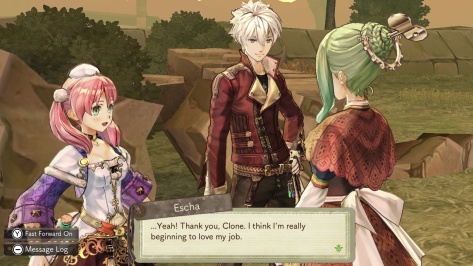 And one interesting thing about the latter in particular is the fact that there often isn’t anything they can do about something that has already gone wrong; upon investigating a village whose water supply has seemingly dried up completely, there’s very little that even the power of alchemy can do to set things right.

It would be easy for a setting like this to end up feeling hopeless and pointless, but there are enough little victories along the way to make it feel like it’s still worth trying. Colseit, for example, despite clearly being a shadow of its former self, still prides itself on the impressive yield of its apple orchards. Escha’s cousin Awin is a habitual overachiever, constantly finding inventive ways to make people’s lives better through technology and engineering. And a significant ongoing quest that runs through the background of the main narrative in the game concerns Escha and Logy’s attempts to achieve what was once believed impossible: to reach the floating “Unexplored Ruins” and discover what lies within.

In terms of tone and feel, it’s a really interesting game, because there’s a lot of what is going on in the world of Dusk that could feel completely soul-sapping — whether it’s the fact the world is obviously dying, or the fact that mindless bureaucracy has taken such a hold over everyday life. But all of that is countered by something somewhere in the setting or story, ultimately leading to a feeling of Escha, Logy and the people around them having continued hope in the face of adversity and even potential despair.

It’s inspiring, really. And pretty much exactly the kind of story we could all do with at the time of writing.

More about Atelier Escha & Logy: Alchemists of the Dusk Sky
More about the Atelier series