The thing that’s surprised me the most is that I’ve actually felt rather invested in the various stories being told this time around. While narrative hasn’t been completely absent from the Dynasty Warriors games I’ve played in the past, it’s never felt like a particular focus. Now, granted, I haven’t played many of them particularly seriously since… probably 3 or 4 back on PS2 (and I will be rectifying that in the future of this series and/or on Warriors Wednesday!) — but I very much like what they’ve done here.

Dynasty Warriors has always been in a bit of an interesting, awkward situation when it comes to story. Not only does it have multiple different factions, each with their own individual stories to tell — and various “crossover” moments — but it also encompasses a significant period of time, taking in several generations’ worth of warriors over the course of the complete conflict depicted in the overall narrative.

This latter aspect in particular presents a challenge to the writers: how do you get people to feel invested in and attached to the various characters if, perhaps, you only see them for a mission or two, and then they’re dead, somewhere else or just… no longer relevant? It’s a challenge that even original Romance of the Three Kingdoms author Luo Guanzhong seemingly didn’t really know how to handle; at multiple points throughout the original book, years of chaos and untold bloodshed occurs over the course of a single paragraph, making it a bit difficult to feel a personal connection.

DW8XLDE handles this quite simply, but effectively. Anything “large-scale” unfolds on an abstract campaign map using third-person, historical narration. Oftentimes, this can be quite “cold”, bluntly announcing that a particular character succumbed to illness or was cut down in a battle that wasn’t directly relevant to the narrative route you’re playing through right now — but it allows you to easily understand the broader context of what is going on through a combination of clear prose and visual aids.

What really works is how each individual mission focuses on a few characters. As the “historical” narration comes to an end, the three or four characters you have available to you for that particular battle are brought to the forefront, bringing us a neat transition between the big picture and the personal level. And once you’ve selected a character and outfitted them accordingly, things descend even further to a more personal level.

Many missions begin with a moment of respite inside your forces’ main camp. While there, you can buy and sell weapons at the blacksmith, talk to other main characters who will be playing a role in the upcoming battle and even discuss matters with a variety of incidental, anonymous NPCs from your forces’ main army. What’s interesting about this is that even these seemingly unimportant characters have their own stories to tell, and the dialogue has been written in such a way that you can get to know and even recognise a number of unique (albeit still unnamed) characters over the course of one of the main routes through the game.

One young private might be inspired by the leadership of the playable characters; another might study under one of them; another still might be fighting in the wars to help create a better world for his wife and children. At the other end of the spectrum, some of these characters are terrible gossips, allowing you to find out a few intriguing little tidbits about some of the playable characters that you might not otherwise discover otherwise!

It doesn’t stop there, either. Where battles do not begin with this “camp” sequence, they feature a character-centric cutscene involving all the main playable characters — and it’s here that the game’s storytelling shines the most. We see how these characters interact with each other and what their interpersonal (sometimes familial) relationships are really like; historical depictions of these figures and even fictionalised accounts such as Romance of the Three Kingdoms can tend towards being rather dry and formal, but during these sequences we get the opportunity to see that even the most formidable warriors of ancient China are human beings at heart — they laugh, cry, mock one another, get into fights, have light-hearted competitions and stand up for what they believe in.

A particularly memorable example came during the Wu campaign, in which Lu Meng, Gan Ning and Ling Tong were all attempting to infiltrate an enemy base under cover of nightfall. Gan Ning turned up with a bunch of gigantic jingly bells on his trousers — a reference to the supposed preferences of the real Gan Ning, who liked to let his foes know he was coming as an intimidation tactic — and Ling Tong proceeded to argue with him about whether or not this was appropriate. Finally, Lu Meng snapped and yelled at them both for being such childish idiots, and this ends up being what lets the enemy know they are coming! 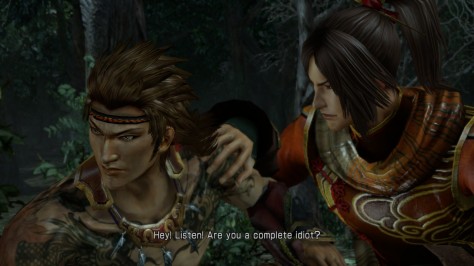 It’s not all comedy, either; the Shu campaign in particular is fraught with tragic scenes, particularly if you’re following the historical route, and actually brought a tear to my eye on more than one occasion; I’d been fighting with and as these brave warriors and leaders for so long by this point, it was genuinely quite heartbreaking to see their plans fail to come to fruition, or for someone to suffer a great loss at the worst possible time.

Which brings up another interesting point. Dynasty Warriors has been telling the exact same story for nearly twenty years now, so you’d think it might lose some of its impact by this point — since each previous game effectively “spoils” all the others from a narrative perspective. But no; I’ve been surprised and delighted to discover that despite already knowing what’s going to happen, I’ve still felt completely engaged with the overall story, even rather attached to quite a few of the characters. In some respects, it might even add to the emotional impact; the nature of classical tragedy, after all, is recognising that a character has a fatal flaw and is eventually going to bring about their ruin. And there are a lot of classical-style tragedies across the duration of the whole Three Kingdoms period!

When I first started playing DW8XLDE, I thought I’d just race through the story modes before getting my teeth into Ambition Mode. Now, I’m feeling rather differently; I want to take my time over these stories, get to know these characters better and perhaps change history for them. Liu Bei and Zhuge Liang deserve better than what their fates ended up being, dammit!