In honour of the end of our Evenicle slightly-longer-than-a-month — and of today’s surprise announcement that Evenicle is now available on Steam — I thought it was high time we highlighted another of the game’s wonderful wives.

Riche is one of the first characters you meet in the game, and she sticks by your side pretty much for the entire duration, giving you plenty of time to get to know her: who she is, why she is the way she is, why she’s doing what she’s doing and… uh… what she’s “into”, if you catch my meaning. 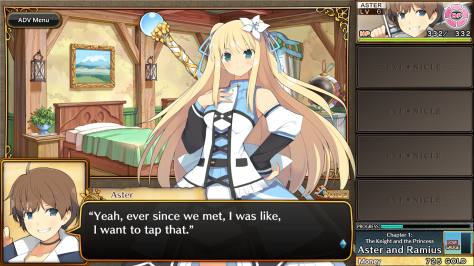 Riche hails from the kingdom of Eden. She’s the second princess of the kingdom, so although she’s royalty, she hasn’t found herself lumbered with that many particular “responsibilities”. Finding this to be rather a boring existence, she developed a somewhat tomboyish streak, often sneaking out of the castle to go and see what was going on in the world. She even went so far as to disguise herself as a boy on a few occasions, a fact that Evenicle protagonist Aster accidentally admits he finds to be “hot”.

It’s during one of these excursions (though not dressed as a boy this time around) that she stumbles across Aster for the first time — washed up on a beach near the town of Abel, unconscious and possibly drowned. Rather than panicking, she takes the initiative and saves his life, though takes her leave before revealing her identity.

It’s not until Aster proves himself to local knight Ramius Dreissen that we start to get an inkling that Riche might be someone a little out of the ordinary. There seems to be a connection between Ramius and Riche, for starters, and it doesn’t take long to figure out that Ramius has been assigned to watch and guard Riche to prevent her becoming a liability both to her kingdom and herself.

Thing is, Riche is actually a very capable young woman, and, as a skilled mage, doesn’t really need Ramius’ protection — and as such takes every opportunity to give her the slip. Aster entering the picture, however — initially saving Ramius by marrying her to calm her raging loins after being afflicted by the powerful, dangerous drug Adan’s Blood, and subsequently pledging himself to Riche’s mission to eliminate the criminal organisation Snake Crest — makes her realise that despite her lofty status, she doesn’t have to do things herself; she can rely on others.

Riche is a proud young woman who doesn’t like to ask for help, which is why Aster, who is fairly perceptive about these things, offers it without hesitation. Not only that, he offers himself to her as a husband: while his initial motivations for this may appear to be less than wholesome (he got a raging erection when she was giving him CPR on the beach) it becomes very apparent after not very long at all that he holds the princess in high regard — not because she’s a princess, but because he respects her capabilities and believes in her mission.

As the game progresses, Riche very much takes on something of a “motherly” role towards the rest of the group, with a few exceptions: her rather sheltered upbringing has left her with little in the way of practical homemaking skills such as cooking and cleaning. Fortunately, this role is more than capably fulfilled by Aster initially — who became a very good cook both through having to live by himself and under the tutelage of his adoptive “sisters” following the death of his parents — and later by Tio, who steps down from the world of politics after a series of particularly harrowing events and discovers she rather enjoys the world of domestic bliss. 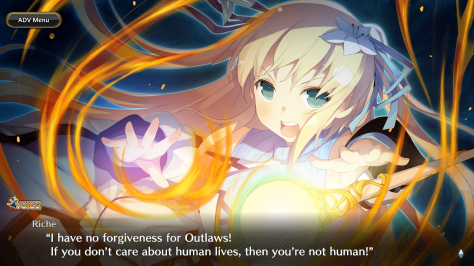 You’d expect Riche to be somewhat reserved when it comes to sex, because that’s the stereotype of a “princess” character, but she subverts expectations somewhat. She’s initially not all that sure during her first intimate encounter with Aster, but over time she starts to open up more and more and even take the lead. There are even several incidental, optional conversations over the course of the game where she starts casually dropping in mentions of the fact she might be interested in trying some S&M play, with her in the dominant role. Aster, naturally, notices this immediately, much to her embarrassment, but is set at ease by his remarkably accepting, understanding nature. The pair don’t actually try anything like this over the course of the narrative, but it’s safe to assume it’s on their “agenda” for some point in the future.

Despite technically marrying “out” of royalty by pairing up with Aster, she remains fiercely loyal to her father and sister — particularly the later. Her sister Croix plays a major role in the storyline because in the World of Eve, she is considered to be a particularly powerful Saint: one in possession of a large amount of soul power. Some even believe she is the second coming of Mother Eve herself, and much of the later hours of the narrative concerns Croix’s importance to the world. 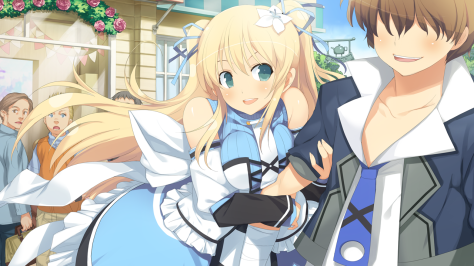 Riche doesn’t resent her sister’s importance, however, nor is she envious of her popularity. In fact, one gets the impression that she would much rather continue to operate “under the radar” as she does for much of Evenicle’s narrative — particularly after some of the ordeals Croix is subjected to by the time the story has reached its conclusion. She even goes so far as to save her sister’s life by, uh, having sex with her. It makes sense in context, but it’s rather too complicated to get into here. Suffice to say, it’s hot.

Riche is an absolute delight to have around for the whole game, deftly sidestepping the usual “princess” tropes in favour of being a simply likeable character. She effortlessly blends a tomboyish sense of adventure — and a fascination with the world’s mysteries, much to the chagrin of the more grounded members of the group — with an understated but undeniable femininity, and, just like all of Aster’s other wives, she quickly becomes an important, precious and irreplaceable part of the family as a whole.