Gust’s games are known for having a distinctive aesthetic, but Blue Reflection is one of the company’s most beautifully presented titles.

A big part of that is down to the work of Mel Kishida, a frequent Gust collaborator, and an artist with a very distinctive style all of his own.

Kishida has worked across a number of different media over the course of his career, including light novels and anime as well as video games. His noteworthy non-gaming works include illustrations for the Heaven’s Memo Pad series of light novels as well as character design for the 2011 anime adaptation, and the well-received anime Hanasaku Iroha, better known to some as Hanairo, The Blooming Colours or The ABCs of Flower Blooming, depending who you talk to.

Kishida’s style is typically characterised by soft outlines that almost look like they’ve been pencilled rather than inked, usually combined with pale, pastel colours; the image above from 2013 is a good example of what to expect.

Kishida’s images typically have a lot of detail and something of a “storybook” quality to them. The image above wouldn’t look out of place on the front cover of an expensive hardback book of fairy tales, for example. It’s this particular aspect of his style that formed the basis of some of his most well-known work in video games: the character design for the Arland trilogy from Gust’s long-running Atelier series.

The art for the three Atelier Arland games was peak Kishida: soft edges, gentle colours, elaborate outfits obviously inspired by European (particularly Gothic, Germanic) fashions of yesteryear — and, of course, a strong, though not exclusive, focus on cute female characters.

Even the very tone of the Arland games was in keeping with Kishida’s art. Unlike most RPGs, the Arland trilogy (and indeed much of the Atelier series as a whole) wasn’t about epic, world-saving adventures; instead, it was about the surprisingly relatable adventures of three young girls, each of whom found themselves somewhat in over their head for one reason or another, and having to grow up rather too quickly. The stuff of fairy tales and fables, to put it another way.

Kishida’s character designs typically incorporate large, expressive eyes and have a certain air of “fragility” about them. The manner in which the art is designed and presented often gives the characters the appearance of elaborate, intricate dolls rather than just “generic anime-style characters” — and this is particularly apparent when combined with the Gothic fashions and youthful appearances Kishida tends to emphasise in his artwork.

This isn’t to say Kishida is in any way a one-trick pony, however. As this image demonstrates, he has clear experience with and command of traditional artistic techniques — though this image is still recognisable as his work despite having a much more “realistic” appearance than many of his other images.

Even Kishida’s less obviously fantastic images incorporate his obvious preferences in subtle ways; consider this image, for example. As well as looking somewhat like a combination of pencil sketch and watercolour art, notice that beneath the girl’s skirt is a lacy, frilly petticoat; not something typically seen in artwork depicting modern-day school-age characters, particularly those wearing sailor uniforms like this.

It is, however, obvious that Kishida very much has a “comfort zone” in terms of character design — though within this he’s clearly capable of plenty of variety. In the above image, for example, his characteristic “porcelain doll” look for female characters is combined with elaborate armour design rather than more traditional Gothic-inspired clothing. The European medieval influences are still very clear; they’re just explored in a rather different manner.

Kishida’s influence is very apparent in the overall art direction for Blue Reflection. The whole thing is presented in very soft, subtle tones, with Kishida’s distinctive “pencil outline” appearance carrying across intact to the cel-shaded 3D models. And nowhere is Kishida’s taste for fragile-looking, doll-like characters more apparent than in Lime — a member of the cast who subverts the expectations her appearance might set by being somewhat acidic (appropriately enough) and practical rather than overly feminine.

While much of Blue Reflection unfolds in the real world and consequently involves characters wearing distinctly normal outfits — usually their school uniforms — Kishida obviously got to let his hair down a bit with the “Reflector” outfits for the three main cast members Yuzu, Hinako and Lime.

These elaborate outfits — which assemble themselves piece by piece in authentic “magical girl transformation” sequences, I was delighted to discover — clearly feature the frilly, Gothic-inspired designs that Kishida is so drawn to, but emphasise the pale pastel colours and muted palette the game makes use of throughout.

There’s some obvious inspiration drawn from the concepts of performance and showmanship, too — an obvious choice, given protagonist Hinako’s background as a ballerina — with an almost “ice dancer” appearance to the girls in their Reflector outfits. This is probably most apparent in Yuzu’s outfit, whose tutu is cut in such a way to make it obvious she is wearing a leotard rather than a dress or skirt. 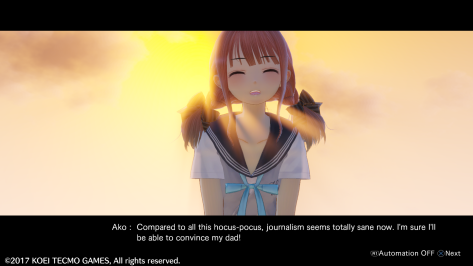 Back in the real world, meanwhile, a sense of distinctiveness and individuality is given to each character through various, more subtle means than simply giving them a completely different outfit. While it’s clear that the game’s school setting has a uniform policy, different individuals throughout the cast interpret this and express themselves in different ways, whether it’s through tying their hair up in a distinctive style and complementing the blouse with a waistcoat, as Ako does here…

Or indeed covering the whole ensemble with a baggy, somewhat unflattering cardigan jacket, as Kaori does here. Kaori is another interesting example, as she’s obviously presented in such a way that we’re supposed to immediately assume she’s the “sexy delinquent”, but taking a little time to get to know her reveals otherwise. But more on that another day.

Even subtle touches like choice of legwear and skirt length are used to give us visual cues about the character — visual cues which lead us to assumptions that aren’t always accurate, as we’ve already noted, but visual cues nonetheless. It’s obvious that the characters have each been assembled with care beyond simply slapping a different head and hairstyle on the same “generic schoolgirl” model.

At this point, while it’s not directly related to Kishida’s contribution to the game’s aesthetic, it’s worth noting that the visual direction of the game as a whole is astonishingly good — good enough to be actively noticeable. I know, I know, something about the mark of good direction being that you don’t notice it, but in the case of Blue Reflection it really highlights the difference some good cinematography techniques can make to how a story is presented. 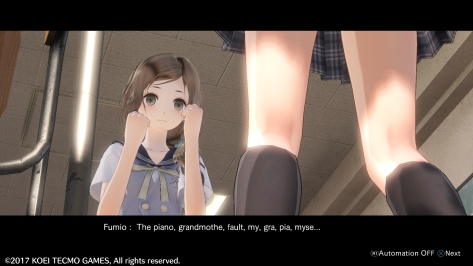 The use of interesting, unusual camera angles, effective use of lighting (particularly the natural light of the sun at various times of day) and distinct colour schemes being used to complement the mood of a scene all give the experience as a whole a feeling that it has been crafted as a complete, coherent work of art rather than a game with disparate components.

And this feeling of coherence even carries across into the menu screens of the game, which all adopt this distinctive, beautifully angular “diamond” motif to emphasise the story’s core concept of “emotional fragments”. The menus look as if they’ve been shattered into pieces, and your interaction brings some order to the chaos. I don’t think I’ve ever seen such good-looking menus outside of the Persona series.

Blue Reflection is an absolute delight to behold, then — even if its high resolution textures and detailed character models often cause its frame rate to plummet, a fact which techno-snobs will no doubt thumb their nose at — and is a beautiful example of what a difference it can make if you design a game with a completely coherent aesthetic in mind right from the outset.

Now I better stop staring and actually play some more if I want to write about the story by next week, huh…?