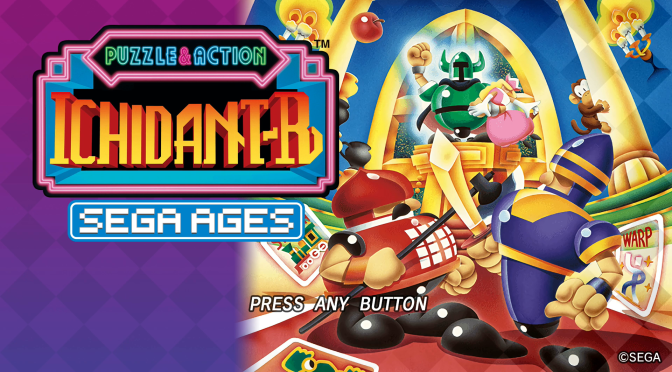 Say the words “minigame collection” to a modern-day gamer and chances are they will roll their eyes and say something about shovelware, perhaps the Wii.

But we’re not about that sort of negativity here on MoeGamer, particularly because I know that minigame compilations can be an absolute ton of fun, and there are numerous great examples from throughout the years.

One such example is Ichidant-R, the sequel to Tant-R, which in turn was a bizarre spinoff of Bonanza Bros. And wouldn’t you know it? Sega just happens to have released Ichidant-R as part of its excellent Sega Ages collection on Nintendo Switch. Let’s take a closer look. 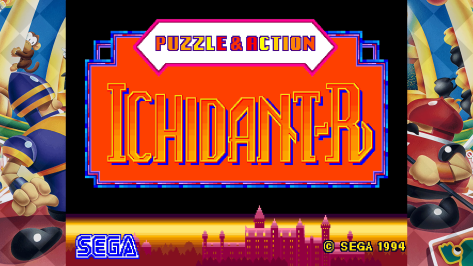 The Puzzle & Action series, of which both Tant-R and Ichidant-R are a part, remained a mostly Japan-only affair throughout its lifetime in the 16-bit era — though interestingly, Ichidant-R did see an English language arcade release in Europe and Korea, unlike its predecessor. As such, you’d be forgiven for being unfamiliar with it, so let’s kick off with a basic exploration of what it’s all about.

In Ichidant-R, a princess has been kidnapped, and it’s up to one or two brave knights (who bear an uncanny resemblance to Robo and Mobo from Bonanza Bros.) to rescue her by proceeding through a linear sequence of side-scrolling levels punctuated by the villain’s henchmen.

In order to defeat a henchman and proceed on your way, you have to clear a particular number of minigames. Defeat all the henchmen in a stage and you have a brief bonus round in which you can earn extra lives, then you repeat the process on a harder, longer stage until you eventually rescue the princess. 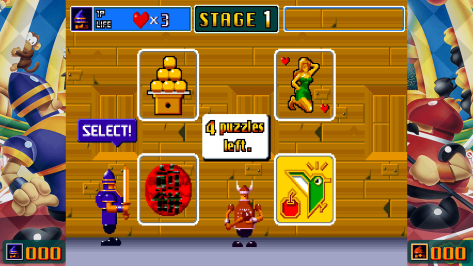 The minigames are selected via a “roulette” system. Four are available to play at any time, each represented by an easily recognisable, distinctive icon. A highlight will move rapidly between them, but with careful timing you can easily pick the one you want to play. Once you clear a game, the ones you didn’t pick will remain, and the one you cleared will be replaced with a new one.

The minigames all involve scoring a particular “quota” by succeeding at whatever task is expected of you a particular number of times. Initially you’ll need three successes, but later in the game you may need to succeed five or more times.

Each minigame presents you with a seemingly simple task and a tight time limit. Some of these are tests of observation, others of skill, others of reflexes. In one instance, you might be tasked with a Tower of Hanoi-style puzzle in which you must stack a bunch of frogs on a specific lilypad in size order. In another, you might have to shoot down a UFO using Missile Command-style “aim and explode” controls. In another still, you might have to carefully time button presses to catch bouncing dango and impale them on a skewer in size order. 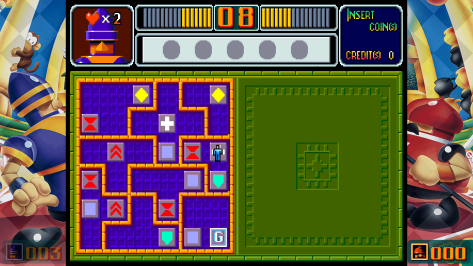 There’s a dynamic difficulty level in play. Succeed and your next attempt will be a harder version of the minigame; fail and you lose a life, but the difficulty will drop back down again, meaning you shouldn’t get “stuck”. The arcade version of the game found in the Switch port allows for unlimited continues, so you can brute-force your way through the whole game if you so desire, though since there’s no formal “scoring” system as such, it’s much more rewarding to simply see how far you can get on a single credit.

Or play against a friend, of course. Like its predecessor (and indeed its original source material), Ichidant-R is a game probably best experienced alongside a friend.

When played in multiplayer, Ichidant-R is a curious blend between competitive and cooperative. In order to clear a minigame, you simply need to meet the quota between you, but the game also keeps track of who has won the most rounds in total, allowing you to battle it out for bragging rights. A two-player game also makes continuing feeling a bit less like “cheating”, since these scores don’t reset upon using a credit, so you can simply declare the winner based on who won the most rounds by the time you reach the end of the game’s complete runtime. 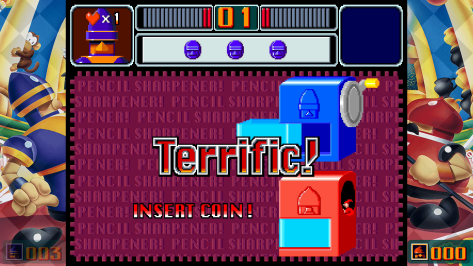 There’s a ton of variety in Ichidant-R’s minigames. Some are recycled from Tant-R, but there are plenty of new challenges, too. Some unfold in split-screen, allowing each player to work on their own personal task, while others see both players competing to be the first to spot something on a shared screen. And the fact that the mechanics vary enormously from testing twitch reflexes to your powers of logical deduction and memorisation mean that there’s a chance for all types of player to be able to excel at different times.

But there’s more. The Switch version of Ichidant-R also includes the Japan-only Mega Drive version of the game, which not only includes a near-perfect port of the arcade game (including the option to play with limited credits if you have no self-control) but also features several new ways to play.

Probably the most fascinating of these is the Quest mode, which unfolds like a top-down RPG. In this mode, you’re tasked with finding a series of hidden items by locating monuments around the game world and defeating the sages within at one of the minigames. As you wander around the world, you’ll get into random battles — which, of course, are also resolved with minigames — and earning experience allows you to earn extra lives on each level up. 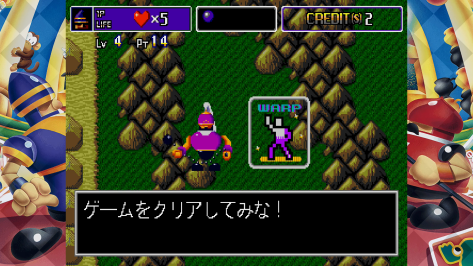 This mode can be played with one or two players, and presents some interesting twists on the formula, because not only do you have to deal with the minigames themselves, you have to deal with larger “meta-puzzles” in the game world. There are mazes to navigate through, a logic puzzle that demands you search the correct village for a hidden item and plenty of other challenges besides.

There’s a fairly major catch for us here in the West, though; while the arcade version of Ichidant-R can be played in English, the Mega Drive version remains resolutely in Japanese. This means all the dialogue and clues in the Quest mode as well as the minigame instructions are completely indecipherable if you don’t have a certain amount of Japanese literacy. The latter is a little less of an issue, since you can learn the minigames in the English arcade version before jumping into the Mega Drive port, but not being able to understand the dialogue in Quest mode is a bit more of a problem.

Fortunately, Sega had the foresight to include some helpful information in the Web-based electronic manual; while it doesn’t transcribe the Japanese characters into romaji to allow non-Japanese speakers to “sound them out”, it does indicate what the most common words and basic kanji you’ll encounter will be — and even provides some assistance with what is probably the Quest mode’s most complicated puzzle. 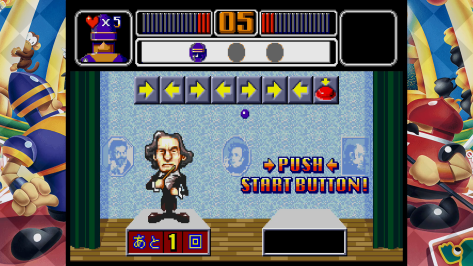 It’s not ideal, obviously, but print out the most important pages from the manual on your home computer and have them to hand when you try your hand at the Quest mode and you should be able to take on its challenges without too much difficulty.

If that all sounds like a bit much, the Mega Drive game also offers a board game-style Competition mode for up to 4 players, and a Free mode that is likewise for up to 4 players where everyone competes for points. You can also compete against other players online — though given the fairly niche-interest status of this title you’re probably best off pre-arranging a game with a friend rather than hoping to rely on matchmaking.

It’s a pity the Mega Drive version of Ichidant-R wasn’t localised for this Switch release — particularly as that’s where the most interesting multiplayer options lie — but the whole package is certainly still very playable, whether you’re solo or playing with friends. As well as being a highly enjoyable “Puzzle & Action” game in its own right, from a broader perspective it demonstrates Sega’s clear commitment to the Sega Ages collection on Switch being a comprehensive worldwide celebration of its games from over the years — whether or not those games made it out of Japan. 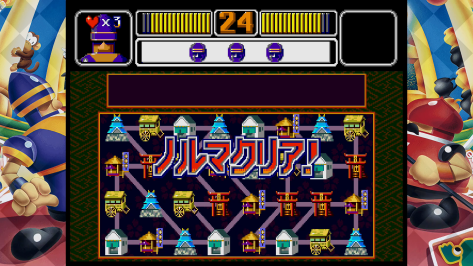 Now if they’d just hurry up and release G-LOC, I’d be a very happy man…

One thought on “Ichidant-R: Minigame Mayhem”