Although it’s been rather quiet for a while, the Japanese company Cave has long been known as one of the best developers of modern shoot ’em ups out there.

With most of their titles falling into the danmaku (“bullet hell”) subgenre, their titles have a reputation for being challenging and punishing but highly polished, combining solid mechanics with absolutely beautiful presentation and a delightful blend of “old and new”.

Deathsmiles is one of the company’s most well-regarded recent works, and is a great example of what “frantic shooting” is all about — not to mention a fine showcase for Cave’s mastery of game mechanics that go far beyond simply “shoot everything and don’t die”. 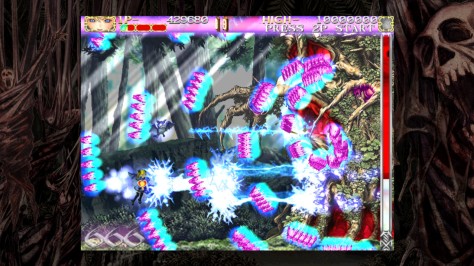 Deathsmiles is noteworthy for many reasons, but one of the most significant facts about it is that it was the first Cave shoot ’em up to get an official Western release on consoles in both North America and Europe. Previous Cave titles such as Espgaluda II, Muchi Muchi Pork, Pink Sweets and Mushihimesama Futari had been released on Xbox 360 in Japan, though curiously, they had eschewed the console’s typically used (but apparently optional) region-locking. This meant that Western players had actually been able to play Cave titles long before Deathsmiles came along, but Deathsmiles was the first that wouldn’t require them to pay potentially exorbitant import and customs fees.

Deathsmiles was a good choice for Cave’s first Western console release. Although it’s no slouch in the difficulty department, it is, relatively speaking, one of Cave’s more accessible titles, thanks in part to it being a horizontally scrolling game rather than the company’s more frequently seen vertically oriented titles. Horizontal scrollers generally give the player a lot more room to manoeuvre — or at least, the feeling that they have a lot more room — by virtue of making use of the whole screen rather than a narrow strip up the middle. For those unaccustomed to the relatively constricted view that a vertically oriented game (such as any of those previously mentioned) offers, a horizontal title can be easier to become accustomed to, even as that screen tends to get filled with bullets and enemies.

That additional room to manouevre is particularly important for newcomers to bullet hell games due to the high level of accuracy required. Like most bullet hell games, only a tiny portion of the visible player sprite actually detects collisions, meaning that seemingly impassable bullet formations — particularly on the higher difficulty levels, where destroyed enemies often spew out “suicide bullets” as well as their regular attacks — can be avoided with a delicate touch and a lot of gritting of teeth. Don’t expect to get to the end in a single credit on your first try — though for those who simply want to clear the game or learn the levels for a later score attack run, infinite continues mean that you can credit-feed to your heart’s content.

Deathsmiles casts you in the role of one of several flying young goth loli girls, each of whom have their own variations on how to blast enemies out of the sky. Like most Cave games, there are several ways to fire — tapping the fire button produces a “shot”, while holding it down produces a “beam”, but Deathsmiles also adds the ability to use a lock-on attack thanks to your character’s familiar.

The three different types of shot are important primarily for scoring, because each type of enemy you encounter is “best” dealt with using a specific type of fire. Weak “popcorn” enemies are usually best destroyed using the shot attack, for example, while more powerful foes are typically best dealt with using the beam. Using the “correct” attack for each enemy causes it to drop significantly more score-boosting items than it would do otherwise, so aiming for a high score involves not only learning the levels, enemy formations and bullet patterns, it also demands that you learn which attack to use when.

Collecting the score items does more than just boost your score: it adds to a power-up gauge which can be unleashed at various points according to exactly which of the game’s several modes you are playing. Powering up turns all bullets on the screen into score items and causes enemies to drop significantly more items, allowing your score to skyrocket. It’s only a temporary benefit, however, so much like everything else in the game, you’ll need to learn the best time to do it.

Deathsmiles is an incredibly creative game that becomes increasingly peculiar as you progress through its stages. Beginning as a fairly conventional-looking “Japanese gothic-inspired anime” affair, by the end of the whole thing you’ll have beaten a boss simply called “Giant Cow Mary” (who is exactly what she sounds like), blasted your way through the middle of a volcano and battled your way into a distinctly Dracula-esque castle to face one of most magnificently named final bosses of all time: Tyrannosatan.

It’s a spectacular journey for sure, presented in beautiful 2D pixel art with an absolutely wonderful soundtrack accompanying the action. The bullet patterns you’ll face are interesting and varied, the enemies strike a good blend between comedic and horrific, and the whole thing is carried off with a wonderful sense of personality: a strong feeling that it’s been designed as a game that has a very clear understanding of — and pride in — its own identity.

The game’s sense of identity isn’t just present in its aesthetic, though; it knows that it’s a hardcore, highly competitive sort of game that genre veterans will want to perform their best at. To that end, the game features leaderboards and a replay facility, allowing you to either rewatch your own performances or download those of others to see exactly how good they really are. And once you feel you’ve mastered one way to play, a selection of other modes provide twists on the scoring system and, in some cases, new mechanics and characters to try out.

Like most shoot ’em ups, if you go into Deathsmiles expecting a game to play once through and then be done with, you’ll be finished in under an hour in all likelihood. But take the time to get to know how its unusual systems work, how the different characters play and how to dodge those initially daunting bullet patterns and you’ll find a game you want to come back to time and time again… if only to hear its amazing music just one more time.

Deathsmiles is available now for Xbox 360 (in both physical and digital form, though the former may be tricky to find these days) and Windows PC via Steam.