Another Atelier game in the books, another opportunity to celebrate the series’ incredible music — and the sterling work of Gust’s sound team in general, who consistently put out some absolutely amazing tracks.

Atelier Firis’ soundtrack is a beast, consisting of 125 tracks in total. Considering the massive scope of the game, this shouldn’t be altogether surprising, but what’s impressive is that each and every one of those tracks is worthwhile and enjoyable to listen to, whether it’s a simple field theme or the most intense battle themes the score has to offer. As always, we’ll be taking a look at a few selections from the complete score rather than the whole thing!

Music this time around was provided by Kazuki Yanagawa, Tatsuya Yano and Daisuke Achiwa; it seems Hayato Asano took a break from the series for this one, which isn’t altogether surprising, as he was likely busy putting together the absolutely amazing soundtrack for Nights of Azure at the time. And, if you picked up the physical release of the complete Mysterious Trilogy from Play-Asia, don’t forget that it comes with a code to download the full soundtracks until April 21, 2024!

As always, we begin with the game’s main opening theme, heard in the introductory video before you even see the game’s main menu. This time around we’ve got a piece of music that is simultaneously driving forward yet endearingly gentle — a perfect musical depiction of a little flower like Firis heading off on an epic journey.

The regular four-on-the-floor beat gives a nice sense of constant movement and syncs up nicely with the video footage, much of which consists of Firis running across various environments, and the gentle vocals and instrumental accompaniment gives a very sweet feel to the whole thing.

Firis certainly encounters danger on her journey, but the general idea behind her adventures is one of positivity, and this theme reflects the fact that this is a game about positivity and hope, not about struggling against impossible odds. It’s a very nice way to set the scene.

The theme for Ertona, Firis’ hometown, is rather cold and melancholy, yet there’s just a hint of the warmth of home and hearth there, too.

In context during the game, this piece of music will often be accompanied by the distinctive sound of Ertona’s bell ringing out the various times of day; in the opening hours of the game, this feels oddly oppressive and helps to highlight the fact that Firis feels trapped and claustrophobic in her present life — but when you return to Ertona later in the game, the whole thing feels much more nostalgic.

This is a great example of how the context in which you hear a piece of music can greatly change its overall meaning. While you might feel negatively towards Ertona at the outset of Atelier Firis, by the midpoint of the story you’ll come to regard it much more fondly — and your reaction to this piece of music will change accordingly.

This is one of two “Working!” themes heard in the game, showing up any time Firis puts up her physics-defying atelier tent and gets to work inside. It’s a joyful, enthusiastic sort of piece which helps reflect the passion Firis has for what she’s doing. She really believes she can achieve what she wants — and she’s going to make sure she has fun doing it.

The bouncy dance rhythms give this piece that distinctive folk music-inspired Atelier feel — as does the use of instruments we often hear in Atelier soundtracks, such as accordion, cembalo and tin whistle. It’s a catchy theme — and good job, too, since you’ll be hearing it a whole lot! 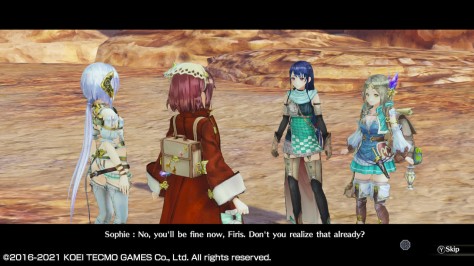 We previously talked about how Atelier Firis takes some heavy cues from popular Western open-world games — most notably the transition from the linearity and confinement of an opening segment into the blinding light of the sun as soon as you get out into the big, wide world.

This theme, heard in the first couple of “outside” zones in the game, really helps to highlight that Firis has made a significant step in her life. She’s finally passed through the doors that she has felt so oppressed by for her whole life — and a world of possibilities are spreading out in front of her.

On top of that, the driving rhythms and the hopeful melody is a wonderful accompaniment to exploration and travel. There’s a world full of mysteries to discover — and Firis is going to track down each and every one of them. 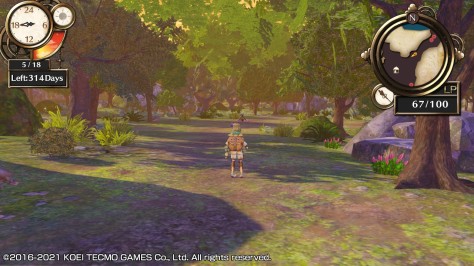 By contrast, this theme, heard in a densely wooded area Firis passes through as she gets further and further away from home, reminds us that journeys aren’t always about intensity and excitement; sometimes it pays to slow down, enjoy the scenery and drink in the atmosphere of what is around you.

The natural world is a source of great beauty, so there’s nothing wrong with stopping to enjoy that now and again. The areas in which this track is heard would make a lovely place to have a nice picnic… well, were it not for the wandering monsters, of course.

One of the most delightful “event” themes in Atelier Firis, “Now You’ve Done It” is a theme that helps to highlight the mundanity and occasional silliness of everyday life. It typically accompanies scenes in which nothing major is happening, but in which there is something that will probably make you smile — bonds of friends and family; a minor success in living independently; perhaps learning from a mistake.

Regardless of context, that muted trumpet theme is always a delight to hear any time it comes up — particularly when it’s subsequently responded to by the recorder melody immediately afterwards.

When Firis finally passes her exam in the first half of the game, the credits roll. You could, if you wanted to, actually put the game down at this point and move on, since that’s definitely an “ending” of sorts — and this song, which accompanies said credit roll, helps to highlight that fact.

There’s a sense of finality to this song; we’ve clearly achieved something great. And yet there’s a feeling of yearning, too; a feeling of hope. There are plenty more adventures we could have if we wanted to — and indeed, if you want the true Atelier Firis experience, you’ll most certainly want to keep playing and see where things end up for our heroine.

With the Sounds of a Cauldron

The second of the game’s two “Working!” themes, this one is typically heard later in the game, where Firis has settled down into her role as an alchemist quite a bit. She’s still passionate and enthusiastic about her activities — but now it’s less about constantly discovering new things and more about refining her craft.

The overall gentler timbre of this piece helps to reflect Firis’ growing maturity and her confidence in her skills. She’s less surprised when things go right now — and just wants to improve as much as possible, potentially catching up with her teacher Sophie in the process.

The game’s actual end credits theme starts with a lovely reprise of one of the soundtrack’s main recurring themes, accompanied by music box sounds, giving us the distinct impression that it’s finally time for Firis to settle down and take a rest.

But then the sweeping orchestral backing and triumphant vocals suggest to us that her journey may well be just getting started. As she’s seen on her travels, the world is both a wonderful and a troubled place, and there are still plenty of things to discover — standing alongside the people that she loves.

More about Atelier Firis: The Alchemist and the Mysterious Journey
More about the Atelier series

2 thoughts on “The Music of Atelier, Vol. 14: Atelier Firis – The Alchemist and the Mysterious Journey”