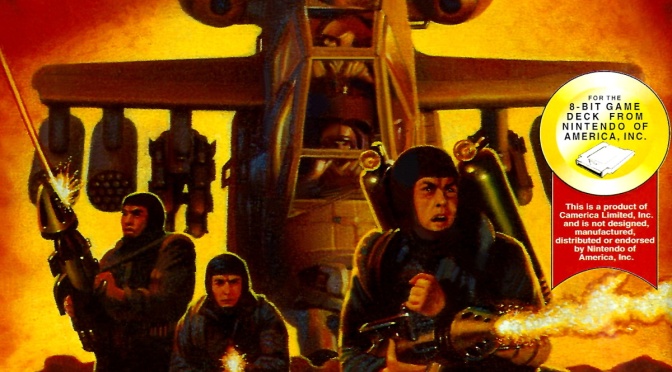 Helicopters are cool. At least they used to be in the ’80s and early ’90s. I’m not sure we’d get a TV show where the helicopter was the star today.

Anyway, with how fashionable helicopters were in this time period, it’s not surprising that we got a fair few video games where helicopters played a leading role. And one such example was FireHawk, developed by the Oliver Twins and published by Codemasters and Camerica in 1991 as an unlicensed cartridge for the Nintendo Entertainment System.

It’s not one of the Oliver Twins’ better-known pieces of work, but it is a fun time. And, as luck would have it, we now have easy access to it as part of the Oliver Twins Collection for the Evercade retro gaming platform. So let’s take a closer look!

In FireHawk, you’re tasked with heading out to the troubled republic of Lafia, where the local drug barons have been getting together to cause trouble. A bunch of elite operatives have parachuted into the islands that make up Lafia, and it’s up to you, in command of the helicopter gunship FireHawk, to get them back, preferably while wrecking as much filthy dirty drug lord-owned property as possible in the process.

If this sounds like a fairly familiar concept, you’d be right. FireHawk features elements of Dan Gorlin’s 1982 classic Choplifter plus Will Wright’s Raid on Bungeling Bay from 1984, and can be seen in some respects as a spiritual precursor to EA’s well-loved tactical shooter Desert Strike, which came out half a year later. It combines its clear influences with some of its own distinctive touches to create a game that very much has its own sense of identity — and which is rather enjoyable to play. 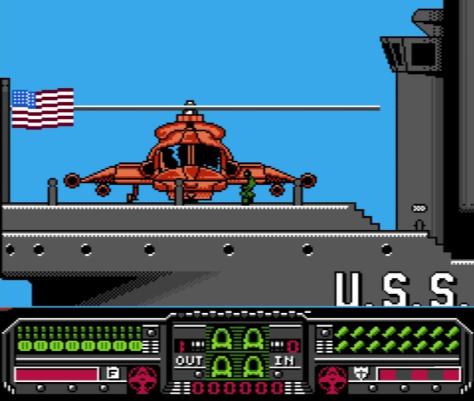 FireHawk unfolds over the course of a series of missions. In each mission, there are a certain number of paratroopers to rescue, plus a series of enemy installations scattered across the scenery. As you might expect, with each subsequent mission, you have more paratroopers to rescue and the area over which your sortie unfolds becomes larger and more dangerous. You’ll need to bear in mind a few things to be successful — your chopper’s fuel level, the amount of cannon ammunition and bombs it has on board, the amount of damage it can take and the fact it can only carry up to four passengers at once.

The majority of the game unfolds from a top-down perspective, with the FireHawk controlled using rotational controls on the directional pad. This takes a little getting used to, but allows for some fairly fancy flying once you get to grips with things; for example, enemy bullets can often be deftly “sidestepped” by flying in reverse and swerving off at an angle from the shell’s trajectory.

The FireHawk is armed with two weapons. The cannons can be fired with one button, and will hit both ground and air targets in front of you, while bombs fire towards the Xevious-style sight that floats in front of you. Bombs are much more powerful but more limited in quantity; most targets can be dispatched with a little gunfire, so bombs should generally be saved for when you’re in a hurry.

The enemy installations you’ll be dealing with vary from structures that are simply worth points to air-to-ground guns, hangars that continually produce tanks for as long as they’re standing, airfields and aircraft carriers that do likewise for jet fighters, and helipads that spawn enemy choppers. There’s no obligation to flatten everything on the map if you don’t feel like it, but if you successfully destroy everything before completing each mission, you’ll get a hefty score bonus before moving on to your next challenge. 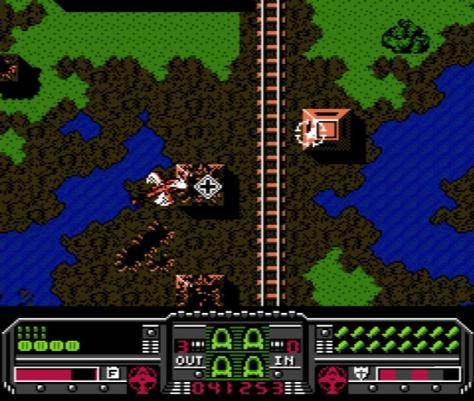 The other reason you might want to blast away at your foes’ installations is that many of them will drop power-ups when they explode. These range from simple restorations of ammunition and armour for your chopper to various upgrades that allow you to move faster, fire more rapidly, fire more powerful shells and upgrade your forward-firing cannons to a three-way spread shot. Power-ups are semi-permanent in that they remain on your copter for as long as it survives; lose a chopper, however, and you’re back to your base-level armament until you find some more upgrades.

Finding your way to the paratroopers awaiting rescue is a matter of following the directional indicator on your bomb sight, then keeping a careful eye out for the tiny trooper sprites, who are often hiding in terrain that is a very similar colour to their uniform — camouflage and all that. Upon hovering over a troop for a moment, the perspective will change to a beautifully-drawn behind-the-chopper scene, during which time you’ll need to use the buttons on your controller to fire the left and right cannons and dispatch enemy helicopters while the trooper is hauled aboard.

This section has an oddly rhythm game-style feel to it in that it’s more about timing than anything else — and you need to be careful, since every enemy that successfully passes by both of your cannons deals a point of damage. Successfully rescue a trooper and you can take them back to your home carrier to restore some armour and ammo; get shot down while they’re in a passenger seat and you’ll lose out on the points they’re worth.

There are lots of nice little touches in FireHawk, with one of the most fun being the fact that your three “lives” in the game are actually represented as three different helicopters — each one is a different colour. Extra lives are quite hard to come by, so you’ll quickly learn to play things very cautiously when you’re down to “the grey one”. There are no actual differences between the three choppers other than colour; it’s just that last one tends to carry with it an inescapable feeling of dread and panic.

FireHawk is a fun and satisfying game with a very distinctive feel to it. The slow-paced tactical action is a far cry from more frantic shooters, and encourages you to think more carefully about what you’re doing rather than just flying in guns blazing. Exploring these tiny top-down “open worlds” and searching for things to destroy is a lot of fun, since the chopper is enjoyable to control and it’s rare you’ll come across situations where you feel like taking damage from enemies is unavoidable. It’s a game where it feels like there is plenty to discover — even if that’s just a more efficient means of clearing out the island before picking up your soldier friends.

Like so many other games on the Evercade, FireHawk is a game a lot of you probably haven’t heard of or experienced before — and one which, upon playing, many of you will likely find yourself having a lot of time for. I’d certainly never come across it prior to its Evercade release, but now it’s absolutely one of my favourites on the Oliver Twins Collection cartridge. Even if I still kind of suck at it. 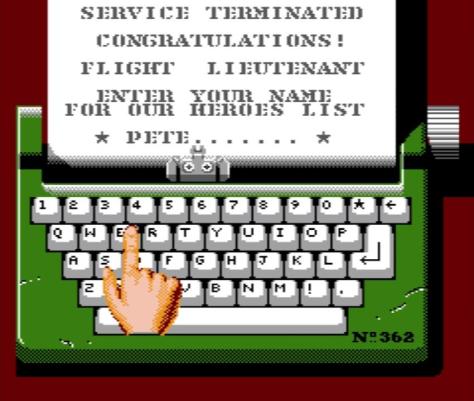 Oh well. Better head out for one more mission, then; I can only get better from here, right?

One thought on “FireHawk: Lafia Strike”