One of the nice things about the Atelier subseries whose installments unfold in the same setting over the course of several years is that we get to see characters grow and change.

An interesting example of this is Filly, sister of Esty. She’s completely off-screen in Atelier Rorona: The Alchemist of Arland, puts in her first public appearance in Atelier Totori: The Adventurer of Arland and really comes into her own throughout Atelier Meruru: The Apprentice of Arland. (At the time of writing, I don’t know if she appears in Atelier Lulua: The Scion of Arland, but I wouldn’t be surprised to see her show up.)

Let’s take a closer look at this character and her role in the ongoing saga of Arland.

In Atelier Rorona, we’re introduced to Filly during one of Esty’s numerous conversations with Rorona at the reception desk of Arland’s palace. Esty is pretty bored at her job, so she likes to gossip — and Rorona is more than happy to lend an ear. It seems that Esty is worried about Filly (who we don’t know by name at this point) being a “shut-in”, unwilling to engage with broader society due to her anxiety over dealing with people.

At the time of Atelier Rorona’s original release in 2009, the conversation around hikikomori — people who deliberately shut themselves away, refuse to participate in society and who are “NEET” (Not in Employment, Education or Training) — had been going on for a few years, with it being brought to a lot of people’s attention through Welcome to the NHK, which first appeared as a novel in 2002 and subsequently enjoyed a well-regarded anime adaptation in 2006. It was also around the 2009-2010 period that there first started to be some substantial, official research into the phenomenon and its possible causes, so it was a concept numerous creators found interesting to explore through popular media.

By the time Atelier Totori rolls around, we finally get to meet Filly for the first time. It seems she was finally coaxed out of hiding to follow in her sister’s footsteps as an administrator at what was once the palace, and she’s introduced in pretty much the way we have been led to expect at this point. She’s absolutely terrified at the prospect of meeting new people, and particularly upset about the fact she seems to have found herself working under Cordelia, probably the biggest firecracker in all of Arland so far as attitude is concerned.

While Cordelia looks to be treating Filly rather harshly right from the outset, we already know from both Atelier Rorona and our early conversations with her in Atelier Totori that Cordelia is a fundamentally decent person; she just doesn’t suffer fools gladly, and tends not to sugar-coat things. As such, her rather aggressive attitude towards Filly is a form of “tough love” — and ultimately ends up having a positive impact on her as Filly learns to develop a slightly thicker skin. Only slightly, though, but to be fair, I suspect Cordelia terrifies even the strongest-willed people in Arland. 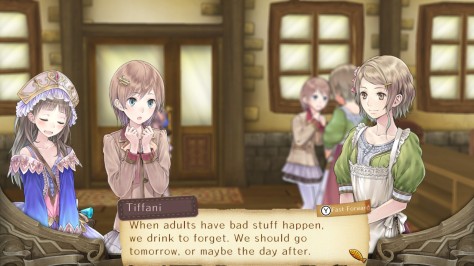 An arguably less positive influence is that of Tiffani, the widowed general store owner, who enjoys a drink. While Tiffani seems to have it together for the most part, she clearly lets loose to a frankly inappropriate degree any time she goes drinking — and in her interactions with Filly, we get an idea that she may, in fact, still be hurting from the passing of her husband some years back.

As such, after Filly shows up repeatedly to complain about her job to Tiffani — the latter’s somewhat “motherly” nature makes her someone people like to confide in — it’s not surprising when Tiffani eventually proposes they go drinking together. This initially looks a little inappropriate, given that Filly’s youthful appearance makes her look like she’s a similar age to Totori, but canonically she’s 21 years old at the outset of Atelier Totori. We can perhaps assume that the years she has spent shut away early in her life caused her to be a bit of a late bloomer — or perhaps she’s just a naturally petite woman. Either way, she’s a bit of a contrast with her sister Esty, who visibly ages (very gracefully, it should be added) between Atelier Rorona and the later games.

Rather delightfully, Filly’s drinking session with Tiffani turns out to be a key turning point in her own development. As we’ve seen a few times previously, Tiffani is a bit… handsy when she’s had a few drinks, and both Filly and Totori discover this for themselves as the night unfolds. Despite it causing both of them to see the seemingly demure shopkeeper in a whole new light after the fact, Filly comes to realise that there is “something much scarier than Cordelia” out there — and that she should probably stop running away from her responsibilities.

Filly doesn’t do a bad job in her workplace, is the thing; she just lacks confidence, both in her own abilities and at the art of interacting with people. She develops a close friendship with Totori, however — perhaps due to Totori’s naturally gentle, softly spoken nature, which Filly doubtless sees as non-threatening — and thus, gradually, manages to open up a little bit. 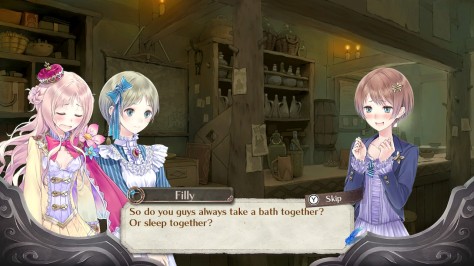 By the time Atelier Meruru rolls around, we see a Filly who is, for the most part, a lot more comfortable with herself — particularly the part that enjoys fantasising about other people’s relationships. She clearly has no interest in pursuing a relationship of her own — in stark contrast to her sister, who is very conscious of her perpetually single status and advancing years — but any time something even slightly suggestive comes up in Atelier Meruru, Filly is there with that inappropriate smirk, those blushed cheeks and the suggestion that something filthy is going on behind the scenes.

That is, except when she’s dealing with strong, intimidating men such as Meruru’s butler Rufus or recurring character Sterk. We can likely attribute this to the fact that her most positive experiences up until this point have been with women such as Totori, Cordelia and even Tiffani (despite… you know) and thus she has little experience dealing with men. But then also both Rufus and Sterk are considered to be particularly intimidating characters by many other members of the cast, too, so perhaps her reactions to them are perfectly understandable. 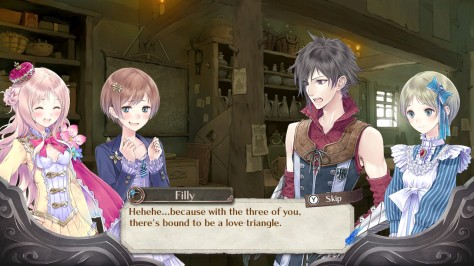 It’s fun to see Filly’s growth over the course of the Arland series. Despite being completely off-screen throughout Atelier Rorona, throughout Atelier Totori and Atelier Meruru she becomes a highly memorable member of the core cast — and someone it’s always nice to come home to after a few weeks in the field gathering alchemy ingredients or working on development projects.

One thought on “Waifu Wednesday: Filly”