Atelier Totori: The Adventurer of Arland has some wonderful female characters in its cast — each of whom supports the titular heroine in various ways.

One of the most comforting presences early in Totori’s new life as an adventurer on the roads of the Arland region is Melvia Siebel, a character whom we’re led to believe has been a presence in the Helmold family’s life pretty much forever.

Everyone loves a good onee-chan, don’t they? So let’s take some time to celebrate one of the strongest, most badass onee-chans you’ll ever encounter. 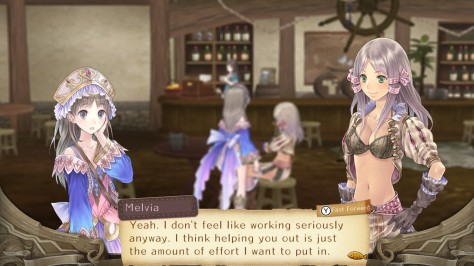 Melvia is a little older than Totori, meaning that historically she’s been more of a friend of Totori’s sister Ceci than Totori herself, but she and Totori have always got along. Thus when Totori decides to strike out on her own, become an adventurer and seek out the truth behind what happened to her mother, Melvia is more than happy to accept an offer to accompany her.

In fact, Melvia somewhat underestimates Totori when her adventure first begins. Clearly believing that Totori will give up on her goals pretty quickly — but too nice to actually say that to her — she notes that she doesn’t feel like “working seriously” and that helping Totori out would be “just the amount of effort [she wants] to put in”. It’s clear Melvia doesn’t mean anything unkind by this — and Totori certainly doesn’t take any offence — but we can see from this that it’s going to take time for the rather meek, timid and shy Totori to prove herself to Melvia when it comes to adventurin’.

The pair bond over tales of Totori’s mother — it seems Melvia remembers her, and saw her as an inspiration, in fact — but as the story progresses a few things become clear. Firstly, Melvia is hiding something about Totori’s mother — this is a major plot point we’ll talk about another time. And secondly, this vibrant young woman is going to have to start taking Totori a little more seriously.

Over the course of Totori’s adventures, Melvia witnesses this meek young girl become a powerful, determined and highly capable young woman — and is happy to stand beside her in battle. At the same time, she never forgets where their relationship started from; later in the game, she’s keen to involve Ceci in their adventures so she doesn’t feel left out, and any time Totori needs a kind ear to listen to her troubles, Melvia is more than happy to oblige. 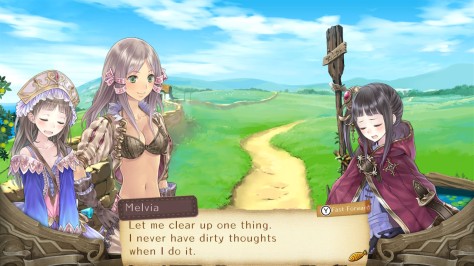 As kind as Melvia is, she isn’t above cracking a joke at the expense of someone who needs taking down a peg or two. We see this if you happen to go on an expedition with both Melvia and Mimi in your party, at which point Melvia, very comfortable with the concept of “sexiness” at the best of times, turns things up a few notches specifically to get a rise out of Totori’s diminutive tsundere friend. And this only escalates as it becomes more and more apparent that Mimi likes Totori a lot more than she’d ever be willing to admit out loud. (At least until Atelier Meruru, but that’s a whole other story.)

This comfort in her own body is a defining part of Melvia’s personality. She dresses deliberately provocatively because she’s clearly proud of her body, but she also notes that the way she dresses is actually quite practical for what she gets up to in the field. She pokes fun at Totori for her elaborately frilly clothes and offers her the opportunity to try on her outfit — an option which Totori sadly declines — and is a fine example of someone clearly comfortable in their own skin.

This is especially apparent during the optional “swimsuit competition” scene late in Atelier Totori: The Adventurer of Arland. Of all the participants, Melvia is the one most obviously comfortable showing off her curves in a bikini — apart, perhaps from Pamela, but technically she’s not really showing off “her body”.

She’s also the one who plays along the most with event host Peter’s perversion — so much so that he becomes distinctly uncomfortable with the whole situation — and thus manages to remain completely in control during a situation where the original intention was exploitation.

A real turning point for Melvia comes towards the end of her personal story arc, where Totori ends up having to rescue her and Cici from a horde of monsters. At this point, Melvia has no option but to accept the fact that her “little sister” has grown up more than she ever thought imaginable — and she should start respecting her as an equal, possibly even a superior.

Melvia never forgets her sense of fun, and is always a pleasure to have in the party. She has a variety of interesting and enjoyable interactions with most of the other party members — and her banter with gruff ex-knight Sterk is particularly amusing at times, as he clearly doesn’t know what to do with her, despite Melvia seeing him as something of a mentor figure.

Sterk’s assertion that Melvia — much like Totori’s mother Gisela, interestingly — “destroyed bridges, homes and ruins wherever [she] went” could well be a sly reference to some of the earlier Atelier games, in which your dungeon exploration was limited by the amount of “damage” the environment suffered during your poking around and battling.

This hasn’t been a mechanic in the series since Atelier Viorate, which was the last game to remain confined to Japan before Atelier Iris: Eternal Mana, but it feels like a nice little nod and a wink to those in the know. 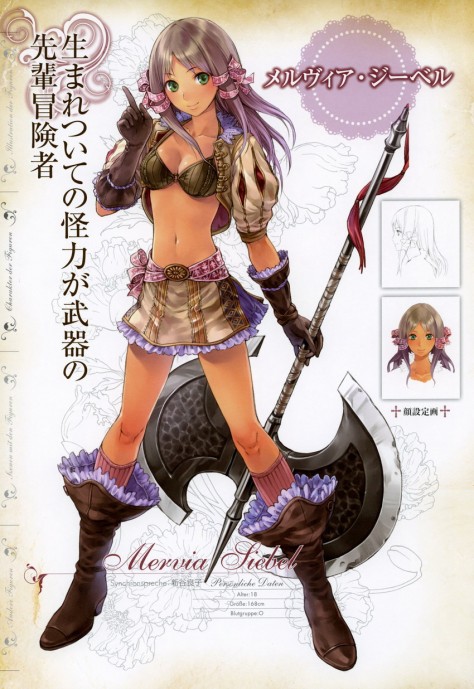 While it’s tempting to leave Melvia behind later in the game as the extended cast becomes playable, I found that she was always a comforting, pleasant presence to have around. She really does fulfil the role of the “big sister” to a tee, and I wonder if Totori would have ended up with such grand ambitions — and the determination to follow through on them — if Melvia hadn’t been part of her early life.