As has become MegaFeature tradition, now we’ve finished exploring Mana Khemia: Alchemists of Al-Revis from mechanical and narrative perspectives, it’s time to celebrate the sterling work of Gust’s sound team with a look at its soundtrack.

Mana Khemia: Alchemists of Al-Revis is the second game in the Atelier series to make use of pre-recorded streamed music rather than real-time synthesised, sequenced music. We were already starting to get a strong feel for the distinct audible aesthetic lead composers Ken Nakagawa and Daisuke Achiwa were aiming for with the series in Atelier Iris 3: Grand Phantasm, but Mana Khemia: Alchemists of Al-Revis and its sequel further codify many of the musical conventions of the series.

These conventions would remain in place as Atelier bid farewell to the PlayStation 2 and jumped to the next generation with the Arland trilogy. So let’s dive into some highlights from Mana Khemia’s score! 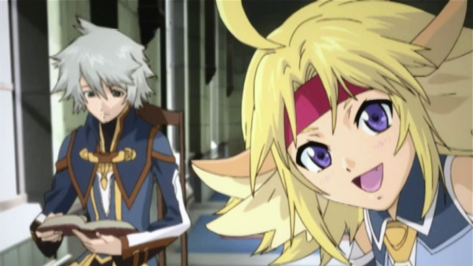 Run for Your Life

Let us begin, as always, with the main opening theme, heard during the animated introduction sequence. Once again, we eschew the more Ar Tonelico-esque choral opening of the first Atelier Iris game in favour of something rather more anime-style. We’ve got a catchy melody line, we’ve got lyrics that relate the the main narrative — though subtly so to minimise spoilers, and obviously you need to either understand Japanese or look at a translation to understand them — and we’ve got strong, driving rhythms to keep the energy up.

Melodically speaking, it’s a fairly simple piece, but this is an effective compositional approach, since it means the main hook will be stuck in your head for a good while even after hearing it just once. This, in turn, creates positive associations in your mind, and helps to keep the game as a whole memorable — because even if you skip right over the introductory logos and animations each time you boot the game up, you’ll still hear at least a little fragment each time before you hit Start! 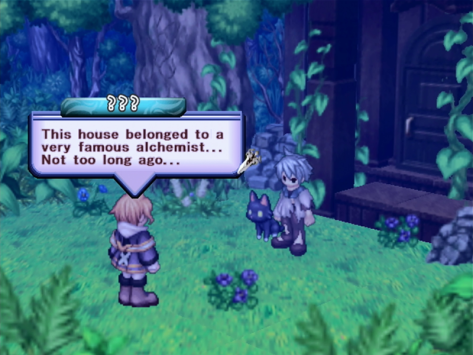 By contrast, this short theme, heard on the game’s main title screen, is distinctly “Atelier” in tone. We’ve got a rather rustic, laid-back and relaxed feel, primarily created by the gentle acoustic instrumentation.

This is definitely a huge difference from the relentlessly energetic rhythms and thick textures of the introductory theme, and arguably does a better job of setting the overall tone of the game — at least in its early hours, anyway. 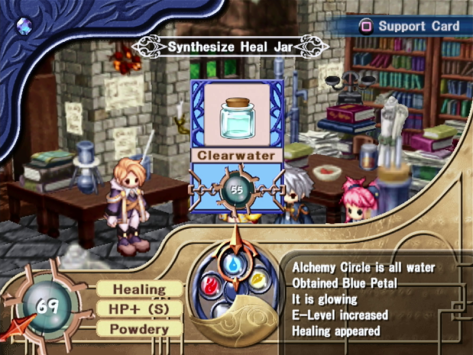 Welcome to the Magic Workshop

Lest you were in any doubt as to Mana Khemia: Alchemists of Al-Revis’ status as a mainline installment in the Atelier series, the main “working” theme, heard in the party’s workshop, is a prime example of the distinctive Atelier sound. The main theme being delivered by traditional European acoustic instruments such as recorders, accordions and bowed strings is a convention that would remain in place for the series for quite some time, as is the overall cheerful, wholesome tone to the whole thing.

Since you spend a lot of time in the workshop crafting things — particularly as crafting is directly tied to character progression in Mana Khemia: Alchemists of Al-Revis — it’s fitting that this is quite an elaborate theme with plenty of melodic interest, but it still keeps that distinctive, catchy style that will have you humming it long after you switch the PS2 off.

This track in particular is one that will sound quite familiar to fans of the Arland trilogy, since a lot of the instrumentation and overall style is very similar to some of the “event” themes heard in those games — particularly Atelier Rorona: The Alchemist of Arland. The immediately recognisable sound is mostly created by the very distinctive sounds of the synth lead and harmonica, most likely recorded using an electronic wind instrument which, you may recall, Nakagawa developed a particular fondness for while composing the Atelier Iris 3: Grand Phantasm soundtrack.

While the track is called Homeroom, implying it’s attached to a location, it’s actually more associated with the character Zeppel, who is a teacher at the Al-Revis academy. Zeppel is one of those teachers who is good at sharing his knowledge, but less good at the other things a teaching role requires; this aspect of his character is explored in more detail in the second Mana Khemia game, but for now we can get a bit of a feel for his personality through this theme. Gentle, congenial, kind… and completely unable to step up to the plate when things get tough, bless him.

I’m grouping these three together because they’re the three main “normal battle” themes you hear over the course of the game as a whole; each is associated with one of the three years protagonist Vayne spends at the academy, and the overall progression between them represents an astonishing escalation in intensity that mirrors the increasing stakes of the narrative you progress.

The first track, Splendid Force, is perhaps what you might expect from an Atelier battle theme. Those traditional, rustic instruments are there at the forefront once again, but there’s also a pleasant bit of howling electric guitar during the middle part of the theme, giving us a bit of a hint of what is to come. The whole thing is less about drama and more about simple energy, however. 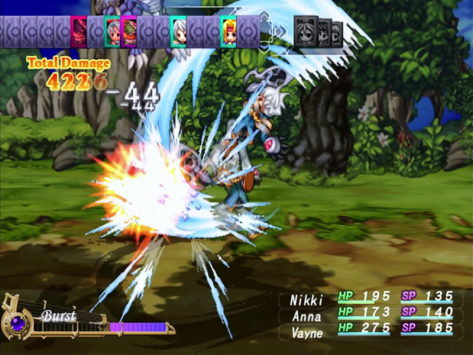 Repulsion, heard in the game’s second year, ups the ante a bit with more of a driving rhythm thanks to repeated electric bass notes, complemented by a main melody on electric guitar right from the outset this time. The overall tone of this one is a little more urgent than its predecessor, but it’s still not quite at “saving the world” dramatic territory.

The face-melting Disruptor, meanwhile, is where you know that things are getting serious. This roughly coincides with the point in the story where Vayne describes “the last time he felt truly happy” at school, and it becomes clear through a combination of the narrative events and the shift in tone for the music as a whole that we’re dealing with a major build-up to the narrative climax. 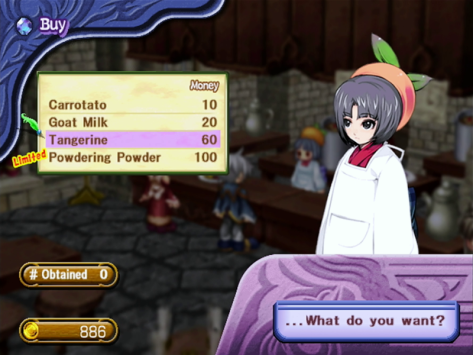 To the Future of Dreams / Sunset

The tonal shift from the first part of the game to the last third or so is also highlighted by a very noticeable change in the main school theme. To the Future of Dreams represents cheerful, youthful optimism without a care in the world, while Sunset makes use of the same melodic line at a slower tempo and with very different instrumentation to highlight the fact that having things weighing on one’s mind can make even the place you have long considered to be “home” feel somewhat alien.

This is a rather common technique in RPGs of this era; Atlus also makes very effective use of it in both Persona 3 and Persona 4 to highlight the considerably raised stakes in the latter hours of their respective narratives. 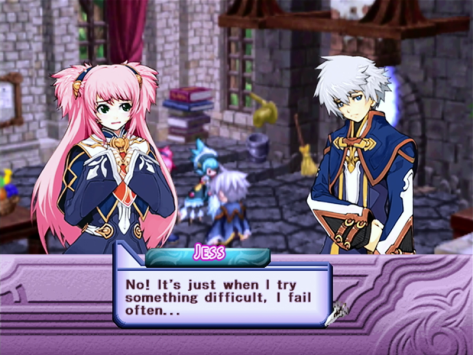 There are a variety of different character themes in Mana Khemia: Alchemists of Al-Revis, usually heard when there’s an event centred around that particular character. Of all the themes, this one, which belongs to Jess, is probably my favourite in that it captures her personality so utterly perfectly.

The whimsical nature of this theme, of course, makes it all the more heartbreaking when you have to deal with the heavier side of Jess’ own personal narrative. Juxtaposition is a wonderful thing.

And let’s close off today with the curiously titled TOGGLE, heard during the end credits. This is a pleasant way to wrap up the game as a whole, since it opens with the distinctive “school bell” pattern that marks the beginning of the in-game classes and complements the main vocal line with many of the instrument sounds heard throughout the game as a whole.

Actually, you hear this song well before the credits if you’re paying attention to what’s going on around the school outside of the main narrative. There’s an ongoing, completely missable little soap opera involving a band that forms during Vayne’s first year at the Academy, and it takes until the very end of the game for them to finally get their act together and figure out how to perform effectively. It’s completely unrelated to the main narrative — and there are no real reasons to go to the Music Room otherwise, so you actively have to seek out this little side-story — but when you twig that this ending theme is the same as the piece the band finally perform when they truly find their groove, it’s heard not to feel a little swell of pride in the student body as a whole.

These sort of little touches are a crucial part of the overall “feel” of the Atelier games, particularly later in the series where the increased power of the host platforms allowed Gust more scope to flesh out the game world, but this specific example was one of the most heartwarming things in all of Mana Khemia — and thus a fitting way for us to say farewell to this game before we move on.

More about Mana Khemia: Alchemists of Al-Revis
More about the Atelier series

6 thoughts on “The Music of Atelier, Vol. 4: Mana Khemia – Alchemists of Al-Revis”