Speak to pretty much anyone familiar with the Streets of Rage series, and chances are their favourite installment is probably the second.

While the first game may have set the template for the series to follow by being a beat ’em up designed for the home rather than the arcade, the second is where it well and truly hit its stride. Streets of Rage 2 demonstrates what the humble Mega Drive is truly capable of in the hands of real masters of their craft.

And it’s a game that is still relevant, enormously playable and impressive to look at, even to this day. So let’s take a closer look.

Streets of Rage 2 first appeared on the scene at the very tail end of 1992, heading West in early 1993. By this point, the first game on the Mega Drive had proven successful, but in terms of technical proficiency, many reviewers of the period regarded the late 1991 Super NES port of Capcom’s Final Fight to have it beaten by a considerable margin.

It’s not an unreasonable judgement to reach; while the Super NES port of Final Fight was missing one of the characters from the 1989 arcade original and, rather notoriously, didn’t have a simultaneous two-player mode, it was still much more of a looker than the first Streets of Rage thanks to its enormous sprites and its smooth scrolling. Streets of Rage’s relatively small characters and 30fps action clearly wasn’t going to cut the mustard any more.

So a dream team of developers — including the original Streets of Rage team plus contributors from Yuzo Koshiro’s company Ancient and several other outfits — set to work making the best damn beat ’em up they could possibly create. During this development process, they determined that it would be necessary to make use of a much larger cartridge size to fit in all the extra goodies they were planning to include. And if you’re going to go big, you’d best go really big; while the original Streets of Rage cartridge weighed in at 4 megabit (about 512k), Streets of Rage 2 took up four times the space of its predecessor (and twice that of the 8 megabit Super NES Final Fight), coming on a 16 megabit cartridge.

What amounts to about two megabytes might not sound like something worth getting excited about today, but cartridge capacity was a big selling point back in the 16-bit era. The common assumption — which tended to be helped along somewhat by the overexcitable ’90s games press — was that more megabits equalled better games. This, of course, was not and never has been true — as anyone who has resented filling a PlayStation 4 or Xbox One with 50-100GB of bland triple-A blockbuster at a time will doubtless be able to attest — but it did at least mean that those creating games on these larger cartridges were able to include much more in the way of audio-visual bells and whistles. 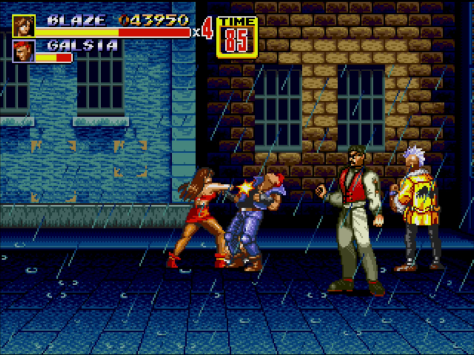 The difference is immediately apparent from the moment you start playing Streets of Rage 2. The small sprites of the first game have given way to much more chunky characters with more frames of animation and greater detail about them.

In terms of pixel size, they’re still slightly smaller than Final Fight’s — Streets of Rage 2’s Axel stands 77 pixels tall compared to 88 pixels for the SNES incarnation of his Final Fight counterpart Cody — and this is compounded by the fact the Super NES has a lower screen resolution than the Mega Drive, making the Capcom game’s characters appear even larger. But that slight size disparity actually works in Streets of Rage 2’s favour; while the screen can often feel a bit cramped in the Super NES version of Final Fight, Streets of Rage 2 strikes a good balance between being impressive to look at and comfortable to play. You can always see all around your character, which is crucial for being able to fully engage with the core mechanical conceit of the beat ’em up genre: managing space.

There’s a lot more detail in the graphics on the whole. There’s much less repetition in the backgrounds, giving each stage a much better feeling of both geographical and quasi-narrative progression, and parallax scrolling is used sparingly but effectively to add depth to various scenes.

There are lots of really nice little touches, too, such as the fact that you can see the first stage’s boss in the background earlier in the level; he charges out of the door while you’re fighting the dominatrix-esque Electra and is waiting for you in the rainy back alley when you finally clear that particular obstacle out of your path. No-one would have complained if the boss had just shown up out of nowhere at the stage’s conclusion — beat ’em ups rarely “make sense” — but this little example is just one of many that demonstrates quite how committed the Streets of Rage 2 team were to creating a truly polished product.

That greater storage capacity on the cartridge also meant that the team were able to do more with sound, too, and this is an area where Streets of Rage 2 really shines. Gone are the farty FM sound effects of the original game, replaced with wonderfully satisfying, crispy “punching noise” samples that give every landed blow a feeling of real impact. The digitised cries are still there, too, making it clear when you’ve defeated a foe — although it’s no longer necessary to rely purely on this.

Streets of Rage 2 took a few cues from Final Fight in terms of interface design, with its most notable addition over its predecessor being the inclusion of enemy health bars for all opponents, not just bosses. Now, every enemy type has a name and a health bar, allowing you to learn what different foes are capable of and how much of a kicking they can stand up to before throwing in the towel. It’s not only satisfying to see these bars depleting as you land attacks, it’s helpful, too — this system allows you to easily see which of your attacks are the most powerful, and even directly compare the strength of the playable characters.

The game makes some mechanical tweaks, too. Gone is the Shinobi-style limited special move system, with Streets of Rage 2 now following the Final Fight mould of depleting a bit of life in exchange for a special attack. There is an all-new addition to the formula, though: each of the four playable characters now has a “Blitz” move, which can be unleashed by double-tapping a direction followed by the attack button. Aside from damage output and speed, these Blitz moves are some of the main ways in which the characters distinguish themselves from one another, since they vary from a powerful uppercut to a speedy slide across the floor, and are well worth getting to grips with.

The overall level of competence of the boss enemies in particular feels a bit more pronounced in Streets of Rage 2. While most bosses in the first game could fairly reliably be trounced by approaching them from above or below then grabbing them, this doesn’t always work in Streets of Rage 2. You’ll need to understand each boss’ available moves and ensure you position yourself at an appropriate range to deal with them accordingly; the battles are much more interesting as a result, and tend not to feel “cheap” — with the possible exception of one blocking, counter-attacking bastard towards the end of the game as a whole.

And, of course, we can’t conclude any discussion about Streets of Rage 2 without mentioning Yuzo Koshiro’s astonishing soundtrack. Composed using an old PC-88 computer and a custom music programming language called Music Love that Koshiro developed himself, the varied electronic beats throughout the game have been legendary for many years at this point.

Encompassing an even broader range of styles than the urban beats of the first game, Koshiro’s new score drew inspiration from popular club genres such as house, techno and breakbeat. The result was an incredible suite of music that is simultaneously a wonderful snapshot of the sound of the early ’90s, and something which still sounds incredibly fresh in the 21st century. Little wonder it was deemed popular enough to get a special rerelease on vinyl via Data Discs — and little wonder it frequently gets brought up in discussions of the best video game soundtracks of all time.

Personally speaking, Streets of Rage 2 is one of my favourite games — not just of the 16-bit era, but of all time. It’s a game I’ve enjoyed time and time again on a variety of different platforms over the years, and it’s a game I continue to be delighted by each and every time I play it. It’s a true classic — and a game that anyone even thinking about developing a modern beat ’em up should study very carefully before committing pixel to screen.

Oh, also, Blaze wears tights in this one, so there’s that too. Make of that what you will, I’m off to punch some dudes!

More about Streets of Rage 2