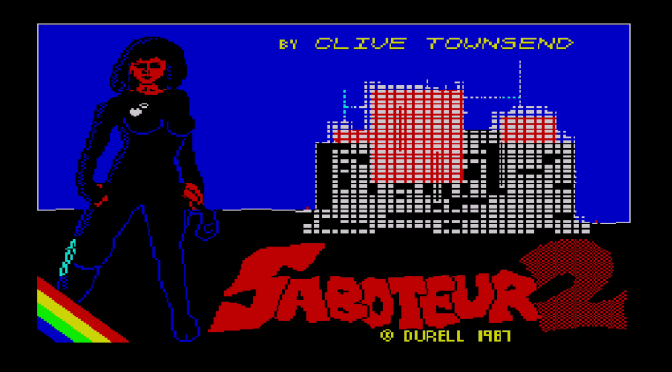 1985’s Saboteur! is a well-regarded title in the ZX Spectrum’s considerable library of games — and, as we’ve seen, it still holds up surprisingly well today.

Two years later, creator Clive Townsend brought us a full-on sequel that was an extremely noteworthy title for a number of reasons — and, just like the original Saboteur!, this can now be played in enhanced form on modern systems.

So grab your shuriken and hop on your hang-glider — we’re going in.

Saboteur II’s original concept was that Ninja, the protagonist of the original game, had died, and his sister Nina (Ninja without a J, do you get it?) was picking up where he left off, taking on covert missions and scoring herself astronomical amounts of money for punching guards and domesticated animals in the face.

The modern remake retrofits that concept slightly. As we’ve previously seen, the newer version of the first Saboteur! adds a whole new section of game featuring dialogue between Ninja and Nina, who is acting as his handler. At the conclusion of this new sequence, Ninja decides to fake his own death so he can swan off and live the life of luxury thanks to his earnings from the mission. Nina, meanwhile, stays on and decides to enter active duty rather than being on the other end of a radio.

Nina’s starring role is probably one of the most noteworthy things about Saboteur II from a historical perspective. While not the first game to feature a female protagonist — that honour probably goes to either Ms. Pac-Man or Metroid depending on how you look at things — it was at least a landmark moment for representation in the British microcomputer development scene, which had typically had either male or abstract protagonists such as spaceships up until this point.

Saboteur II has a similar concept to the original game in that it provides you with a large, 2D open world to explore, and various objectives to accomplish in it. The interesting thing about Saboteur II in this regard is that the specific objectives you need to accomplish vary according to which of the nine difficulty levels you choose to play on. On the easiest, all you need to do is find your way to the exit — a feat in itself the first time you play. On the hardest, you have to locate a significant number of hidden items — paper tapes in the original, computer chips in the new version — then operate a computer console to prevent a rocket launch, switch off an electric fence and then escape… all against the ticking clock.

Each of the nine missions unfolds on the same map — and what a map. Supposedly consisting of over 700 screens, Saboteur’s map — which is actually visible in its entirety on the original Spectrum loading screen — is interesting to explore and feels like a plausible layout for a (two-dimensional) secret base that is up to no good. There are observation towers you can climb, networks of tunnels beneath the ground, high wires you can sneak across and, of course, tall cliffs to plummet from, because what self-respecting evil organisation wouldn’t build their rocket-launching base atop a perilous cliff?

The interesting thing about this is that the structure of the missions is designed to encourage you to explore just a little bit further afield each time you play — and this is further emphasised in the new version, which shakes up the specific objectives considerably rather than adding a large amount of new map as in the previous title. Once again, in the easiest mission, you simply have to escape, but from there you’ll find yourself having to locate new “intel” items (which, piece by piece, spell out the story of what is really going on) before defeating a particular number of enemies and locating the aforementioned computer chips before finally moving on to preventing the rocket launch as in the Spectrum original.

The new version also expands the map little by little with each increase in difficulty, too; doors that were once background scenery become passable, leading to interesting new areas that you haven’t seen before, potentially leading to intriguing bits of intel and more of those all-important computer chips. By the time you reach the ninth and final mission, you should have a very good feel for the layout of the base, where the chips are and the most efficient route you can take to accomplish all your objectives. And, like the previous game, you’re expected to do all this once again without a modern automap facility. 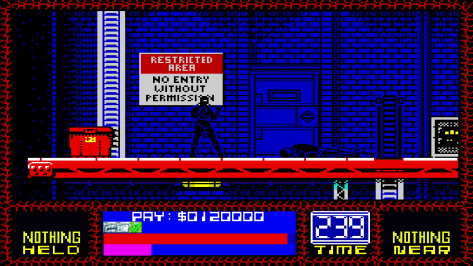 The main enhancements in the new version come in the visual department. While the Spectrum original had room after room with a simple tiled backdrop and an occasional piece of furniture to distinguish different areas, the new version features a lot more background detail, making navigation by “landmark” much more practical. You’ll pass through computer rooms, cages that clearly once housed genetic experiments, a rubbish dump piled high with discarded scrap metal from failed robotics projects, offices, a lecture theatre and many more areas besides; it really adds to the atmosphere and sense of “place” that Saboteur II’s map has.

And, like the newer version of the previous Saboteur!, you can view all these locales through a variety of simulated technological lenses, ranging from the immediately recognisable seven-colour stylings of the Spectrum up to much more detailed Amiga-style visuals. 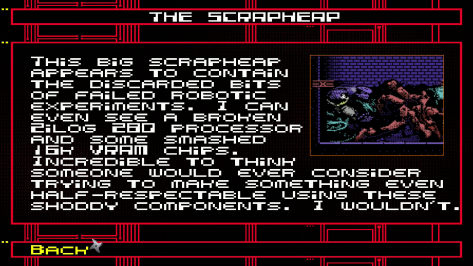 It still plays like a Spectrum game, though, and that’s where some people may find themselves struggling a bit. Combat is sluggish and cumbersome, despite having more moves than the first Saboteur! — and unlike that game, enemies take more than one hit to dispatch here. The whole thing has a “jerky” feel to it that takes a bit of adjusting to if you’re accustomed to modern games, though the jumping mechanics are considerably improved from the first Saboteur!; here, Nina performs an elegant somersault with an actual arc to it when she leaps, making it obvious that the two years between the original releases of both games allowed Townsend to figure out some of the things that worked well, and what needed some refinement.

There are a few nice little Easter eggs here and there in the new version, too. Several of the throwable items are extremely low-resolution versions of ’80s vinyl records, and it’s fun to try and figure out what they are. Also, if you happen to know where the secret room that housed the invincibility power-up was in the Spectrum version, you’ll be pleased to know that the room itself is still present and correct in the new edition — though the actual power-up is not, leading to its own intriguing mystery to solve. The Intel items you’ll stumble across, too, do a good job of making the new game feel like it’s properly connected to the previous one, and give the impression that Townsend is very attached to this setting he’s created.

This is how you do an effective retro remake: make it unapologetically retro in look and feel — once again reminding us all of how unique individual platforms used to be back when technology was more limited — while adding fun new tweaks and refinements that wouldn’t have been possible on the original hardware. And there are plenty of those refinements here, like the new detailed backdrops… or the graphic filters, or the variety of musical accompaniments, including the original Rob Hubbard theme from the 128K Spectrum version.

Saboteur II, like its predecessor, won’t click with every modern gamer thanks to its very deliberate attempt to feel like an old game — but those willing to engage with it on its own terms will find an exciting, compelling, challenging and enormously addictive open-structure 2D platformer to enjoy. And for those old enough to remember it first time around? Well, the new version is, without a doubt, the definitive way to experience Nina’s excellent adventures.