The 8-bit home console era is, at this point, pretty well documented; how many times over the years have we seen an article or video purporting to tell “the story of Super Mario Bros. 3” for the umpteenth time?

But what about the 8-bit microcomputer era? For one reason or another, this has always remained much more niche-interest, with far less in the way of online historical explorations and even less in the way of reimaginings, remakes and rereleases.

Here’s Saboteur!, a Nintendo Switch and Windows PC rework of a ZX Spectrum game from 1985 — put together by the original author, no less — and a title I’ve found myself surprisingly wrapped up in since downloading it from the eShop for 89p a couple of weeks ago!

Saboteur! represents a type of game that was rather popular on the European 8-bit microcomputer formats: an early take on what we now know as the open-structure 2D sidescroller format. In other words, you’re provided with a character who enters a non-linear, open world that is presented from a side-on perspective, and tasked with accomplishing something: in this case, recovering a disk containing valuable intelligence, and, optionally, planting a bomb to blow up the base in which you find the disk.

Like most games of the era, if you knew what you were doing in Saboteur! you can literally beat the game in a couple of minutes by following an optimal route — though its nine difficulty levels add a considerable amount of longevity. Each new difficulty isn’t just a case of bumping up the damage you take from enemies; it actually makes your mission more complex by throwing more locked doors in your path, requiring you to find computer terminals to unlock them — and you can’t count on the bomb you need to plant being stashed in the same place with each new level, either! 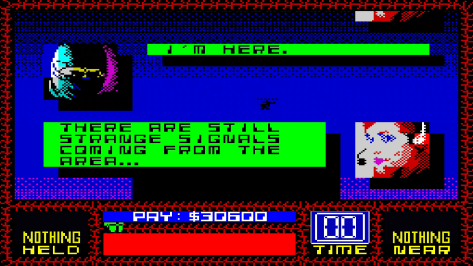 What’s particularly interesting about the modern ports of Saboteur! is that, assuming you complete the original mission correctly by retrieving the disk, planting the bomb and escaping in a helicopter before time expires, things don’t end there. Instead, you receive a surprise dialogue sequence between your previously anonymous, nameless ninja character and his handler Nina — who, as the sequel reveals, is actually his sister, and also a formidable ninja in her own right. More on that another time, though.

Nina informs our hero (who, in a rather nice touch, has a different codename according to which difficulty you’re playing on) that despite him blowing up what appeared to be the secret enemy base, there are still “strange signals” coming from the area. So he lands again, only to discover that his bomb blast has blown open a door to reveal a much larger military complex in which someone is obviously up to no good. And thus begins the real adventure, complete with 100% more dialogue than the original game, lots of gratuitous ’80s references and some highly enjoyable old-school action-adventure puzzles.

Sound good? It is. There are a few things you should know, however, most of which relate to the fact that this used to be a ZX Spectrum game — and that these modern ports are designed to both look and feel authentically like a ZX Spectrum game.

Firstly, the Spectrum’s graphical capabilities were quite limited. It was capable of displaying just seven colours (in two different shades of brightness each) on screen at once from a palette of 15, and it did not have the ability to render sprites in hardware. It became particularly notorious for its iconic “colour clash” or “attribute clash” issue, where overlapping graphical objects sometimes did not appear in the “correct” colour scheme thanks to the fact that colour data was stored separately from the actual pixel data — and in much lower resolution.

What this means to those unfamiliar with the Spectrum is that the game’s visuals feature a very distinctive, low-colour look, typically using solid blocks of very vivid colours for backdrops, while overlaid objects are rendered in black. On top of that, the lack of hardware sprites means that objects often move in quite a “jerky” manner; Saboteur’s protagonist and enemies, for example, look very much like they’re moving a character at a time rather than a pixel at a time. 60fps junkies need not apply.

This was also an age before the games industry as a whole had really standardised the “feel” for various genres — particularly platform games. As a result, Saboteur!’s platforming might initially feel somewhat baffling to anyone who grew up post-Super Mario Bros. — though once you get your head around the idea that holding down the jump button while moving horizontally allows you to effectively “float” a little further rather than jumping in a higher arc, you’ll be able to get around with ease. Likewise, the combat might initially feel like ridiculous flailing, but once you get a proper feel for it you’ll be stealthily taking guards down like a real ninja. 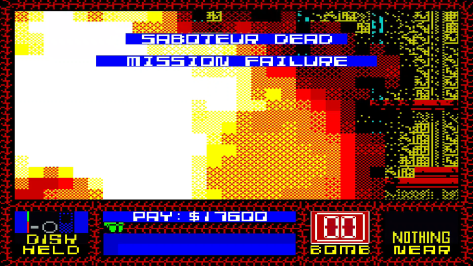 And, of course, this was also long before we’d established modern conventions for open-structure 2D platformers, too; this means that Saboteur! has no automap, no minimap and absolutely nothing to help you find your way around beyond your own memory and perhaps a pen and paper.

All this adds up to a game that might initially feel daunting — even impenetrable — to a modern audience, but give it a chance, and there’s a seriously compelling and enjoyable adventure here. Once you start to get in the right mindset for the game’s exploration — rather than relying on an automap, you should be relying on visible landmarks and muscle memory from repeated runs — it becomes immensely satisfying to traverse the field of operations via increasingly efficient routes, and a built-in “time trial” feature encourages you to try and beat the initial mission as quickly as you can on each difficulty level. 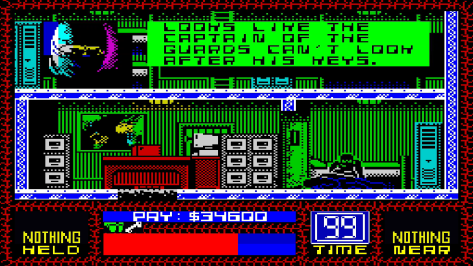 Thoroughly exploring the second part of the game can also reward you with various sets of “VR goggles”, too; these allow you to completely change the visual style of the opening mission (though not the more substantial second part, for some reason) from its original Spectrum look through Commodore 64, Amstrad CPC, NES, Game Boy, Amiga, early MS-DOS PC and even ZX81.  You’re only a true ninja master if you can clear difficulty 9 on the latter, what with it completely replacing all the graphics with text characters and solid black blocks and thus making things quite difficult to see!

This side of things highlights an interesting aspect of gaming that we’ve lost over the course of the last few console generations: the fact that different pieces of computing hardware no longer feel “unique” from each other. You can look at Saboteur! on its default settings and immediately identify it as a Spectrum game — but can you look at a modern game and immediately tell whether it’s running on Windows PC, PS4, Xbox One or Switch? Probably not, outside of relative performance.

That’s a bit of a shame to me, and an interesting sign of how your perspective changes over time. Back in the ’80s when I was playing computer games on the Atari 8-bit, which was technologically superior to the Spectrum in most regards, I thought Spectrum games looked “awful” thanks to their limitations. Now, I recognise them as having an absolutely unique, distinctive style that is all their own precisely because of those limitations — and the same is true for Commodore 64, Atari 8-bit, NES and all manner of other platforms from the period.

Saboteur! won’t be for everyone, to be sure; its rigid commitment to mimicking not only the look but also the feel of classic Spectrum games may prove to be a turnoff to modern gamers raised on super-slick, responsive console titles. But take the time to get to know it, engage with it on its own terms and make an effort to understand what it’s doing both as a self-contained game and as a tribute to its original incarnation, and you’ll find a hell of a lot to like here. I’d very much like to see more modern reimaginings like this.