In the meantime, it occurs to me that in previous Waifu Wednesday installments we have covered many of the characters from throughout Iffy’s Neptunia series (including Vert, Blanc, Uni, Noire, Nepgear, IF and Compa) but never the head honcho, the big cheese, the one and only Neptune herself… although in my defense I did talk quite a lot about her during our discussion of Megadimension Neptunia V-II’s narrative, themes and characterisation. But I digress.

Anyway, with all that in mind… well, you know what’s coming.

Neptune has been one of Idea Factory and Compile Heart’s most prominent mascots for quite some time now, and this is something I find endlessly fascinating for the simple reason that she’s managed to achieve this with pretty much no attention, respect or even understanding from the mainstream press over the course of the last 8-9 years. Her enduring popularity is purely a product of fan (and developer) enthusiasm — and in many ways there’s no better symbol of how the game-playing public’s relationship with gaming commentators and critics has changed considerably in the last couple of decades.

Neptune first appeared in Hyperdimension Neptunia, a PS3 game that first released in Japan in 2010 to generally favourable reviews. It was demonstrated behind closed doors at the Game Developers Conference in 2010, and finally released in the West via localisers NIS America in 2011.

It was not received well over here, with the majority of reviews quick to brand it “sexist” or “senseless”, seemingly without actually taking the time to explore it in any great detail; the “sexist” accusations in particular were based almost entirely on Tsunako’s curvaceous, voluptuous character designs, since had the critics in question engaged with the plot they would have quickly recognised that Neptunia is a series that emphasises the capability and empowerment of its all-female cast more effectively than any explicitly, deliberately “progressive” game I can think of from the past decade. 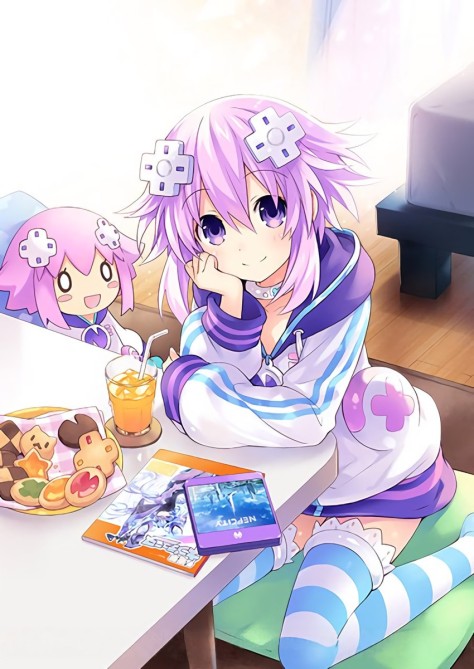 Along with the Western-developed visual novel Katawa Shoujo, the original Hyperdimension Neptunia was an important game in defining my modern gaming habits, because after being recommended it by a friend who I knew had similar tastes, I played it, adored it and promptly realised that review scores and reviews in general had suddenly ceased to hold any meaning for me.

It was like a brave new world opening up before me. What games had I missed out on because the Metacritic scores had been low? What new favourites were just out there waiting to be discovered? And would there be any more Neptunia games? (An emphatic yes to that last one.)

But this isn’t about me. It’s about Neptune. So why is she such a successful character? Well, it’s a combination of factors, really, but the thing that really works for me is her relationship with the player. While several of the characters throughout the franchise “break the fourth wall” on numerous occasions, Neptune is quite commonly seen addressing the player directly, drawing attention to the tropes and conventions her games tend to be parodying and satirising and making self-deprecating jokes. For me, playing a Neptunia game always feels like you’re playing along with rather than as Neptune. She’s an endearing presence, and her characterisation is such that the way she interacts with the world, the people around her and the player feels like you’re hanging out with someone who just wants to have a good time, cracking jokes and laughing at the ridiculous things unfolding. She’s an excellent choice for a controllable character, but achieves this by pretty much being the opposite of a silent protagonist or self-insert character; instead, she feels like a companion.

This isn’t to say that she doesn’t take her role as series protagonist seriously, mind. No, she’s successfully led several adventures under various circumstances at this point — although she has also let her friends take the limelight in a few cases such as strategy RPG Hyperdevotion Noire and action RPG Cyberdimension Neptunia: 4 Goddesses Online. Her charisma and personal magnetism draws people to her, even if, at times, it feels like she’s not quite sure what to do with the people she’s rallied under her banner.

Neptune, like most of her friends, is supposed to be a goddess. Unlike most of her friends, however, she’s not very good at it at the best of times. She frequently shirks her duties in favour of going off to play, exploring or just being lazy, and has to be kept in check by a combination of her much more sensible, intelligent and responsible younger sister Nepgear and ever-present chronicler of the world’s events, Histoire. This flawed aspect of her personality is eminently relatable, particularly to those of us who wish we didn’t have adult responsibilities to waste our time on every day; don’t you just want to kick back and play video games all day? I know I do. 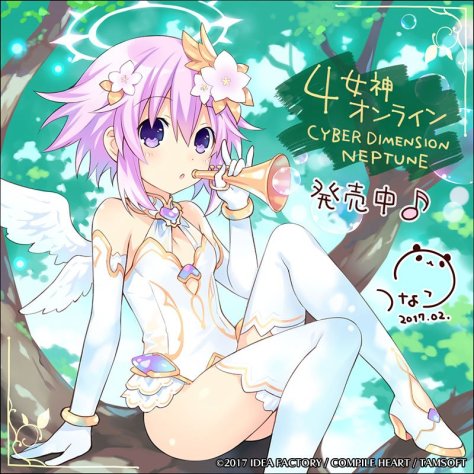 But again, she’s not indolent to an obnoxious degree. She steps up when it counts, particularly when she transforms into her “Purple Heart” form. All of the “goddess” characters in the Neptunia series undergo a certain amount of personality shift when they carry out their transformations, but it’s Neptune who has the most noticeable changes, both physically and mentally.

“Human” Neptune is loud, chaotic, short, skinny and flat-chested; Purple Heart is curvy, busty, determined and (mostly) focused on the job at hand; even her voice changes completely, allowing voice actress Rie Tanaka the opportunity to demonstrate her considerable range between the two distinct “halves” of the character. Interestingly, the writers of the series seem to have “loosened” up Purple Heart’s personality over time; more recent installments see a few more of “Neptune’s” mannerisms breaking through even when she’s in her goddess form, making for some entertaining moments of deadpan humour.

At the time of writing, we’re waiting on the western release of Super Neptunia RPG, which will be the first all-original Neptunia game we’ve had for quite some time. In some ways, it actually feels a bit like Idea Factory and Compile Heart are maybe trying to wind down the Neptunia series in favour of a broader spectrum of titles — the series drew particular criticism in 2014 for releasing four separate titles over the course of the year, two of which were remakes — but I suspect that Neptune and her friends will continue to be an important part of their lineup for quite some time to come yet.

If nothing else, I don’t think the meme machine that is the modern Internet will ever truly let Neptune fade out of existence, even if we never get another Neptunia game after Super Neptunia RPG. And that degree of cultural penetration is probably the most remarkable thing about this beloved character. Long live our goddess.