One of the most delightful things about the modern video game scene is the fact that a lot of developers are willing to go back to classic hardware and make new games.

In doing so, they can create games that feel authentic thanks to their working within the limitations of the original host platform, but which perhaps incorporate some more modern design sensibilities that the gaming community as a whole has figured out over the years.

Xeno Crisis is an unapologetically old-school arcade-style shooter, designed specifically for the Mega Drive and ported to a variety of platforms. That original Mega Drive version is also available as part of a double-game cartridge (alongside the excellent but very different Tanglewood) for the Evercade retro gaming system, and it’s that version specifically that we’re looking at today. 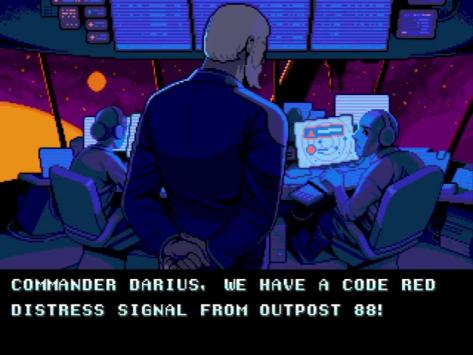 When developer Bitmap Bureau launched the Kickstarter to fund Xeno Crisis back in late 2017, they specifically positioned it as a game that drew inspiration from classics such as Smash TV, Contra, Mercs, Granada, Alien Syndrome, Zombies Ate My Neighbours, Chaos Engine and Shock Troopers. They noted that they wanted the game to feel like a classic Mega Drive game, but incorporate fashionably modern elements such as procedural generation, and make use of some top talent in the pixel art and chiptune fields. With that in mind, they brought on board artist Henk Nieborg (often seen working on WayForward games such as Mighty Switch Force) and YM2612 soundchip specialist Savaged Regime respectively.

They were completely successful in their efforts. Xeno Crisis feels very authentically 16-bit, but with the top talent Bitmap Bureau have on board to help define the game’s overall look, sound and feel, it’s more than that. It feels like an absolutely top-notch 16-bit game — the sort of thing that would have had universal gushing praise from games magazines back in the day, and which would be considered an essential part of everyone’s collection. As it stands, today, it should still be considered an essential part of your collection — though, of course, you have a variety of different ways to play it today. 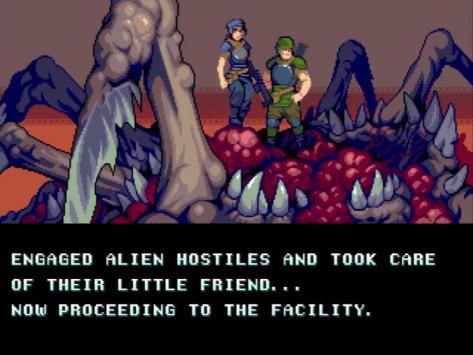 In Xeno Crisis, you take on the role of one of two space marines tasked with cleaning up a whole mess of aliens. As with most games of this type from back in the day, the plot is largely unimportant, though it is introduced with a beautiful pixel art introduction sequence and complemented by some equally lovely interstitial cutscenes. Instead, this is very much a mechanics-centric game where you’ll have to practice in order to get anywhere; even clearing the first level should be considered a significant achievement.

The basic gameplay of Xeno Crisis is similar in execution to the Super NES port of Smash TV, particularly on Evercade. Your character is moved with the D-pad, and the four face buttons fire in any of eight directions; diagonals can be achieved by pressing two buttons at once. Powerful grenades can be thrown with the right shoulder button, and a modern addition to the classic formula is a dodge-roll move that can be used with the left shoulder button, but only when you’re not firing. The dodge roll is essential to master, since it confers a few invincibility frames on your character, and as such should be used to get yourself out of trouble or simply position yourself in a more optimal location for maximum carnage. 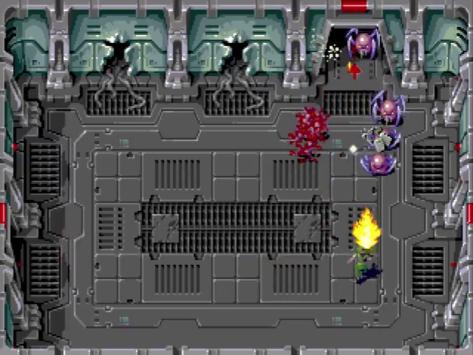 There’s an interesting additional consideration in Xeno Crisis’ mechanics that wasn’t present in many of its inspirations, however, and that is an ammo limit on your basic weapon. Keep firing and your gun will eventually run dry, meaning you’ll need to rush and pick up an ammo box that immediately spawns in the room as soon as you get low. This mechanic is intended not to punish “spray and pray” players or slow the game down, but instead to keep you moving and provide more variety to the encounters. If you’re running dry and the room is still full of enemies, what do you do? Do you attempt to lure the horde into a convenient place and then make a daring dodge-roll through them? Do you fling a grenade into their midst and hope for the best? Or do you collapse in the corner crying?

A further twist is added on this through the addition of weapon power-ups that randomly appear during stages. In an inversion of the normal formula, these are not ammo-limited at all, but rather last for a limited amount of time. As such, when you acquire one of these you can really let loose without having to worry about ammunition; it provides an enormously satisfying sense of power, and encourages you to make good use of a weapon as soon as you pick it up, rather than simply hoarding it “in case you need it later”.

Defeating enemies often rewards you with dog tags, which act as a form of currency between stages, allowing you to upgrade your health, speed, weapon power, ammunition capacity and number of continues — though it’s worth noting that these aren’t persistent. You run out of lives and credits and it’s back to square one for you; this is a pure arcade-style experience. Sure, you could make judicious use of save states to brute-force your way through the game, but it’s clear the developers intended this to be a game you play repeatedly in order to master, perhaps getting a little further each time.

It’s a challenging game, for sure; the first couple of rooms are deceptively straightforward, but by the time you reach the first boss you’ll be left in no doubt as to the fact that this is a game more than willing to mercilessly kick your ass over and over again. The first boss in particular is a real “trial by fire”, as subsequent end-level encounters are noticeably easier; while confronting this initial challenge, however, you’ll need to demonstrate your understanding of the core mechanics in order to proceed. That means making good use of the dodge roll to avoid damage, keeping an eye on your ammunition and timing your runs for ammo boxes very carefully indeed! 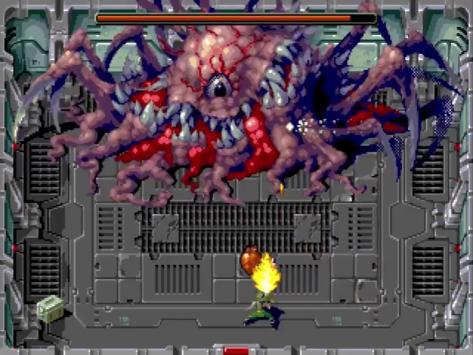 Those who prefer a slightly gentler difficulty curve may find Xeno Crisis tricky to engage with when you first start playing, because it really does throw you right in to the action. Take the time to understand how the game really works and there’s an incredibly rewarding experience to be had, though — and one that can be returned to time and time again. The procedurally generated levels mean that no two playthroughs are quite alike, and the pursuit of high scores offers plenty of incentive to replay, even once you get to a point where you can comfortably clear the game.

Make no mistake, though, for most players it’s going to be a long time before you get to that point; but in the meantime the fantastic visuals and incredible soundtrack will keep you coming back for more. This game fits right in with the distinctly arcadey back catalogue of the Mega Drive — and as an Evercade release, it’s eminently suited to handheld play on the go.

Bitmap Bureau have given us a fantastic game here. Long live 16-bit, I say!