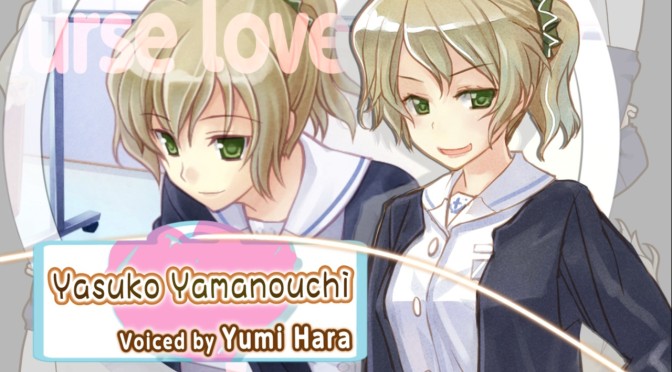 At the time of writing, I haven’t yet finished a full readthrough of Kogado Studio’s Nurse Love Syndrome, but I did want to show some love for one of its main characters. (And probably some more in the near future.)

For the unfamiliar, Nurse Love Syndrome is a visual novel that explores new nurse Kaori Sawai’s early days on the job, and everything that entails — both good and bad. Yasuko Yamanouchi is a character who is introduced early on as one of the more experienced members of the nursing staff but… well, let’s just say she’s a bit of a character.

And she’s voiced by Yumi Hara, too, so if you ever wanted to hear Yumi from Senran Kagura playing someone who isn’t Yumi for once… well, now’s your chance! 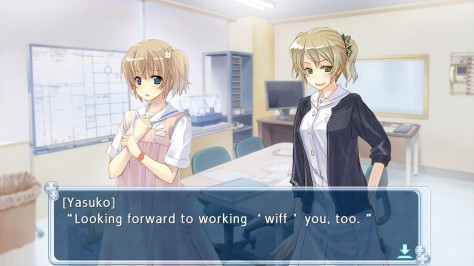 Our first encounter with Yamanouchi (as she is typically referred to throughout the game) comes as she is taking the piss out of our heroine’s intense nervousness at her first day on the job. Her smug grin and her snarky comments may seem mean at first glance, but as you get to know her a bit better, it becomes clear that this is one of many ways that Yamanouchi aims to set Kaori at ease.

After all, consider your own group of friends; for quite a few people out there, I’m willing to wager that the people you appear, on the surface, to be “meanest” to are actually your closest friends. I know speaking from a personal perspective, the people I’ve said the most utterly unrepeatable things to are among the most important people in the world to me. 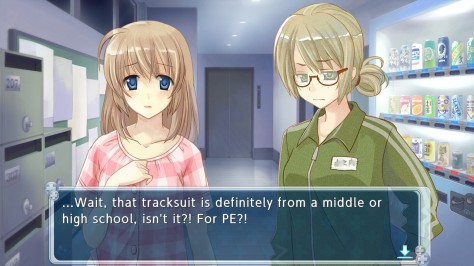 Rather delightfully, it’s not long before we see an alternative side to the immaculately turned-out, highly confident Yamanouchi we see in the hospital — though Kaori herself doesn’t notice it at first. During a chance encounter in her dormitories after hours, Kaori stumbles across a scruffy-looking young woman in nerdy glasses and a dirty tracksuit; it’s not until the next day she realises that this person was, in fact, just Yamanouchi with no makeup on.

There are several incidents like this over the course of Nurse Love Syndrome, where Kaori comes to realise that even the most seemingly unapproachable people have a distinctly human — and often unexpected — side to them when they’re not on the job.

In Yamanouchi’s case, she deliberately keeps a lot of things secret in the workplace, allowing her a hard divide between her professional life and her personal life. She even makes an effort to speak differently at work, eschewing her usual Kansai dialect (localised in the English version, as usual, as a Southern-style drawl) in favour of a somewhat more polite, knowledgeable tone.

That said, as Kaori’s relationship develops with her co-workers and peers, we do see Yamanouchi start to let her guard down a little more, beginning with her slipping more and more slang and dialect into her casual speech with her, and eventually culminating in her recruiting Kaori to help her out with her out-of-hours manga projects.

Yamanouchi is honest to a fault, but she is dead-set on making the nurse’s life comfortable and enjoyable not just for Kaori, but also for Kaori’s senior Nagisa, who became a nurse just a year prior to her friend. She frequently cracks inappropriate jokes, has a fascination with her peers’ lingerie and is quite openly gay. She also believes that while it is important to have fun, that should never come at the expense of someone who is learning the ropes.

“We’ve all been there,” she says to a despondent Kaori at one point, struggling with her duties. “Ya realise there’s so much ya can’t do, and you start to hate yourself… feelin’ all pathetic, wondering if you’re no good. Which is why you wanna try to get better bit by bit. Even if ya can’t be better than yesterday, try to be better than last week, or last month. It takes five years for a nurse to grow into the job. A veteran, laughing at a newbie… that ain’t right. We were all newbies at one point.”

And Yamanouchi’s honesty makes her good at her job, too. When dealing with a patient who says he wants to die so he can escape his family fighting over what he will leave behind, she is able to crack jokes with him and make him feel better about the situation; being able to laugh at a desperate or seemingly hopeless situation is an important life skill, especially in a career as challenging as nursing, and over time one gets the distinct impression Yamanouchi has become a master at putting up emotional shields when she really needs to.

Mostly, though, she’s a character who seems comfortable in herself — or, at the very least, comfortable in the sharp divide she draws between her work life and her home life. While there is a certain degree of crossover by the very nature of her profession and her living situation, for most of the narrative, Yamanouchi seems to be one of the characters who has things most “figured out”.

But what mysteries lie beneath the surface of this seemingly unflappable nurse? What formative experiences helped shape her into the person she is today? What made her feel the need to draw such a solid, clearly defined line between her own life and the nurse’s life?

These are questions that do not get immediate answers — and in the meantime, Yamanouchi becomes an immensely comforting presence to have around, both for the reader and for Kaori. When terrible things happen, Yamanouchi knows what to do. When Kaori screws up, Yamanouchi knows how to help her improve without making her feel like a worthless failure. And when both Kaori and Nagisa run into the emotional brick walls every nurse apparently encounters in their early years on the job, Yamanouchi is there to nod, smile and assure them that everything will be all right in the end.

Plus there’s something humbling and very pleasant about someone who puts so much effort into their appearance in the daytime, and is perfectly comfortable being a scruffy, unkempt, unashamedly massive nerd in front of her nearest and dearest when the sun goes down.

I wish Yamanouchi was my friend, but I’ll settle for friendship by proxy courtesy of Kaori for now.