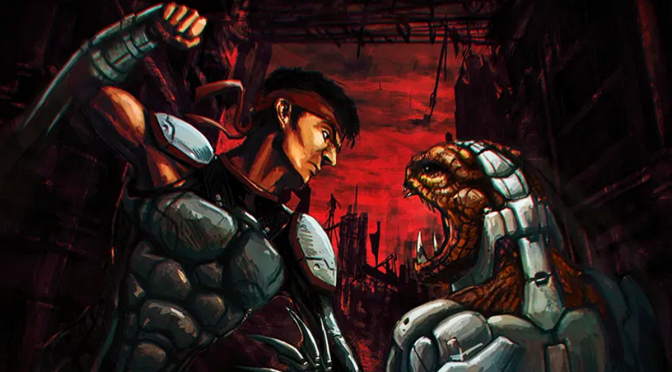 The 8- and 16-bit home computer eras played host to some fantastic games — but when we’re talking about gaming history, most people tend to focus on the home consoles of the era.

This means that a lot of interesting games tend to fall by the wayside and run the risk of being forgotten. One inventive way to address this, then, is to take one of those beloved 8- or 16-bit home computer games and produce a modern port for a classic console system. Problem solved! Kinda.

Well, either way, that’s what happened with Switchblade, a game that began life as an Atari ST game in 1989, and which ended up ported to Sega Mega Drive a full thirty years later. And now you can enjoy the latter version as part of the Piko Interactive Collection 1 cartridge for the Evercade retro gaming system! 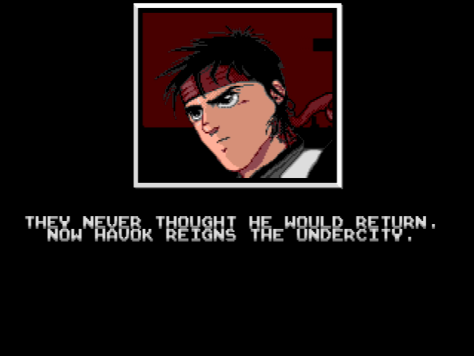 In Switchblade, you take on the role of Hiro, last of the order of Blade Knights, in an attempt to rid the world of the dreaded Havok before he enslaves everyone beneath the heel of well-established physics engines. In order to do this, you’ll need to track down the Fireblade, which, rather inconveniently, has been shattered into 16 pieces and scattered throughout a sprawling underground complex full of tricks, traps and horrible robotic beasties who want nothing more than to stick a big spiky thing up your bot-bot.

All in a day’s work. 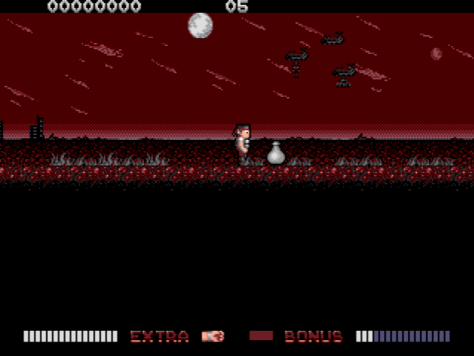 Switchblade was the first game developed by UK-based developer Core Design’s co-founder Simon Phipps — though the complexity of the game and the fact Phipps was tackling it as a solo project in his own free time meant that it wasn’t the first to get released. Indeed, during the 18-month development cycle of Switchblade, Phipps was able to begin and complete several well-regarded games for Core, with probably his most well-known title being early “masocore” platformer Rick Dangerous.

Switchblade was clearly a passion project, though. Phipps drew inspiration from Japanese popular media — most notably the anime Akira, which had released the year before Switchblade’s release — and set out to create something for the Atari ST that brought classic arcade and console titles to mind. 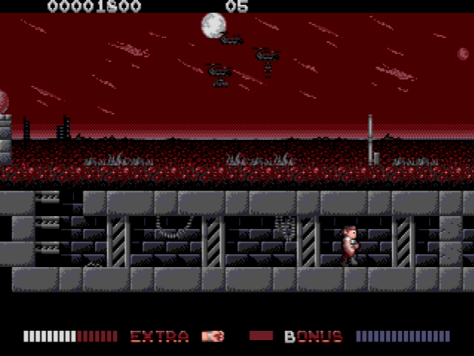 Phipps’ original design for Switchblade deliberately took some of the Atari ST’s inherent limitations into account — most notably the fact that the machine was not good at scrolling. Rather than spend his time as a relative novice programmer attempting to do something notoriously difficult on the platform, he instead borrowed a smart idea from Hewson’s peculiar action adventure Ranarama, which adopted a “fog of war” system to hide unexplored areas from the player until they entered them.

The system’s colour palette, limited to 16 colours on screen at once out of a possible palette of 512 (4096 for the later STE model) also likely led to the game having its distinctive aesthetic; the majority of the game is in shades of grey, with the only real colour being a few shades of red, seen in the sky during the game’s opening, and as occasional highlights on enemies and Hiro himself throughout the rest of the game. While one could argue this makes the game a bit drab — particularly as there’s no variation in this colour scheme once you start exploring the underground complex — it definitely gives the game a very distinct visual identity. 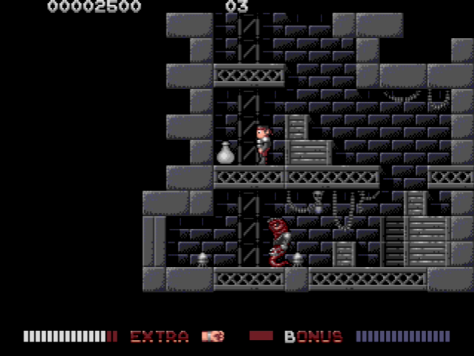 Phipps chose to eschew the usual level-based structure of platform games at the time, and instead produce a solid example of an open-structure, exploration-centric game. Switchblade unfolds in one contiguous world, though there are obvious “areas” to clear out, with the transition from one to the next being marked by a more powerful boss enemy guarding a doorway.

While games like this can often be daunting for a new player, Switchblade unfolds in such a way that there are clear, well-designed routes through the map that naturally lead you from one place to the next with minimal backtracking. As you progress, you’ll start to develop a feel for the game’s visual language, understanding which blocks are breakable, which walls are actually doorways, and the times it might be best to find another way round rather than risking injury by dropping down a big pit. 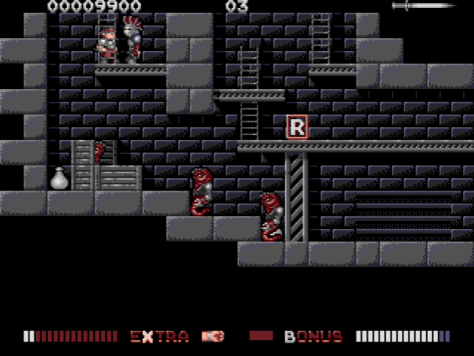 As you progress, you’ll also naturally find yourself stumbling across the arcade-style “letter” collectibles, which spell out “EXTRA” (for an extra life) or “BONUS” (for bonus points). These both provide a nice way to reward the player for thorough exploration, and for progressing deeper into the overall map.

Switchblade features a somewhat unusual control scheme that stems from the fact its original host platform only had a single fire button. Rather than simply attacking by pressing a button, Hiro has access to three martial arts moves: a basic punch, a high kick and a sweeping kick. Each of these is progressively more powerful, and as such they are unleashed by holding the fire button down for varying amounts of time, indicated by a combat power meter at the bottom of the screen. 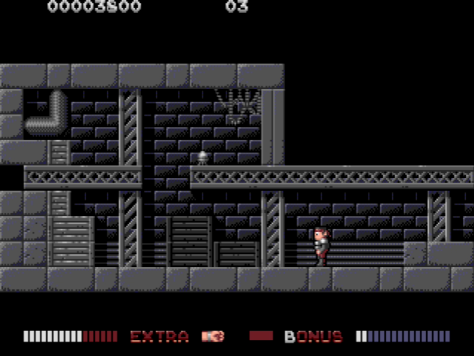 This sort of control scheme might sound antithetical to fast-action combat and in some respects it is — but Phipps was wise enough to design the game around this core mechanic. Simple contact with enemies will not damage Hiro; instead, he’ll only lose energy if he’s hit by their attack animation; in most cases, enemies attack fairly sporadically, allowing plenty of opportunity to get into position. On top of that, successfully connecting with any attack knocks them back slightly, allowing a moment’s breathing room while charging up the next strike — or simply getting away.

There are a number of collectible weapons that Hiro can find along the way, but these are all limited in ammunition, so you’ll spend the majority of your time relying on his fists and feet. Thankfully, these basic attacks can also be powered up in two ways: one type of power-up increases the starting level of the combat power meter, meaning it takes slightly less time to reach maximum power, while the other accelerates the rate at which it increases while holding the fire button. You do lose all your power-ups if you lose a life, however, so be sure to try and keep Hiro safe if he’s all juiced up! 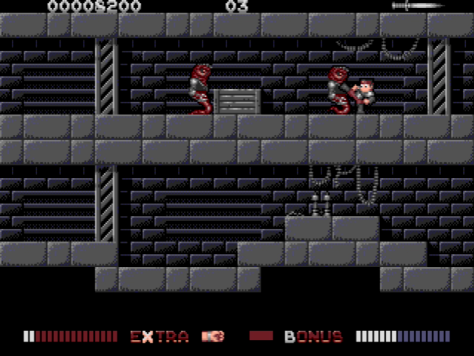 Switchblade is obviously designed around fairly old-school design sensibilities. Movement — particularly jumping — is very clearly “block-based”, making it straightforward to calculate how far and how high Hiro is able to reach from any given point on the screen, and there’s a strong emphasis on learning the game before being able to succeed in it. The aforementioned visual language is important to get to grips with quickly, particularly when it comes to things like spike traps in the floor — these may seem invisible to the novice player, but a bit of experience will soon let you figure out what you should be watching out for!

From a modern perspective, it’s an interesting challenge to play a game like this with no save or continue system — though when playing on Evercade or using an emulator to play the ROM file you can, of course, make use of save states as you see fit. Given that the game features a pretty robust scoring system, though, it’s rather fun to start from the beginning each time and see just how many points you can score before Havok’s forces get the better of you — Phipps definitely nailed the arcade-style addictive qualities with this aspect of the game. 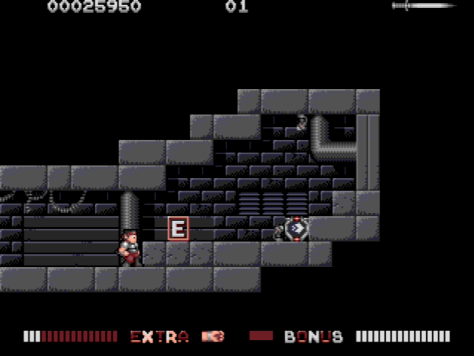 While Switchblade’s slow pacing and seemingly clunky controls won’t resonate with those more accustomed to games with a bit more fluidity to them, this is a very interesting, relatively early example of the open-structure 2D platformer, as well as an intriguing look at a Brit’s-eye view of what a “Japanese-style” video game really is. Those who enjoy deliberately paced exploration over fast-action combat will find a lot to like here — not to mention a sprawling map that will keep you busy for a good long while as you attempt to track down all those Fireblade pieces!

6 thoughts on “Switchblade: Living on a Knife Edge”