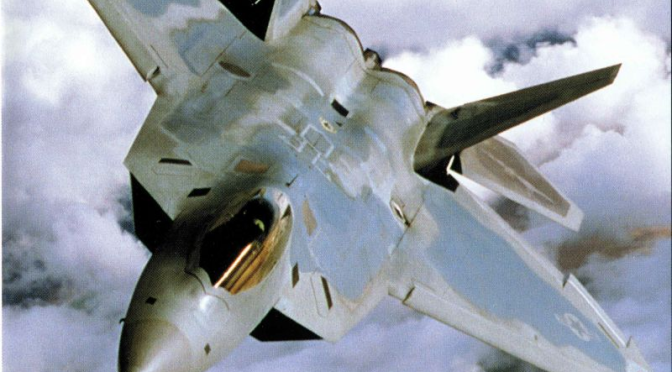 A core part of my gaming “diet” in the 16-bit home computer era and onwards into the early days of mainstream PC gaming was the military flight simulator.

I have many fond memories of piloting numerous pieces of military hardware around the virtual skies, dropping bombs on filthy commies (this was the height of the Cold War, after all) and dictators in the desert — but for me, it wasn’t necessarily the action-packed parts of these games that was appealing. No, it was the simple satisfaction of remaining in control of several tons of metal that really had no business being up in the air and not immediately plummeting to the ground.

This was a feeling I hadn’t really experienced for a while, to be honest; the Ace Combats of the world have their considerable appeal, but they’re not exactly realistic. Taito’s 2003 release of Energy Airforce, on the other hand… well, let’s take a look.

Energy Airforce is one of those games that is quite hard to find information on, because it seemingly passed by most mainstream review sites almost completely unnoticed back in the day. Its sequel Energy Airforce: aimStrike! is marginally better known and its Xbox 360 spiritual successor Over G Fighters even more so, but the series as a whole is one that has largely been consigned to the void of history — and where it is acknowledged or remembered, it does not tend to be with much fondness.

Which is a pity, really, because although Energy Airforce most certainly isn’t a game that everyone will enjoy by any means, it’s a fascinating title in its own right — and an impressively ambitious attempt to bring a full-on flight sim experience to the humble PlayStation 2.

In Energy Airforce, you take on the role of a mercenary pilot for the titular organisation. There isn’t really any narrative setup given other than the fact that the force as a whole appears to be some sort of global peacekeeping force, scattering to the four winds in order to take care of various conflicts as they arise. This is pretty much how the old flight sims on home computers did it, though; Spectrum Holobyte’s seminal F-16 simulation Falcon, for example, simply gave you a selection of missions and difficulties to choose from, while MicroProse’s many titles, each tending to specialise in a single aircraft, occasionally incorporated dynamic campaign elements — but no real “story” as such. 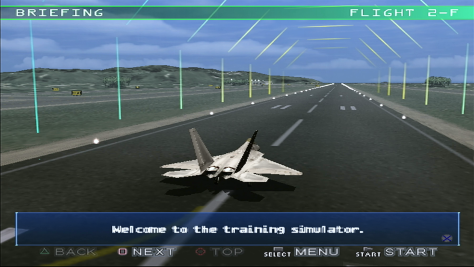 Energy Airforce demands that you prove yourself before you’re trusted with several million dollars’ worth of airborne military hardware, and thus opens with a series of mandatory flight tests. The game gives you comprehensive tuition in how to handle the F-16 Fighting Falcon to begin with, explaining how to take off, land, turn and perform common, useful manoeuvres such as the Immelmann Turn and Split-S, two variations on using a half-loop to reverse course quickly. It then moves on to training in combat techniques, including the use of air-to-air missiles, guided air-to-ground ordnance and unguided bombs.

At the end of each section of training, you’re given a longer “test” to prove you understand how to apply all the techniques in practice. Once you’ve passed all your tests for the F-16, you can enter active duty — and once you’ve proven yourself in a few missions, you can return to the training area to take further tests on the F-22 Raptor stealth fighter and the then-experimental X-35 (today in active duty and known as the F-35 Lightning II). In these latter cases, you only need to take the final tests in each section again rather than repeating all the tuition! 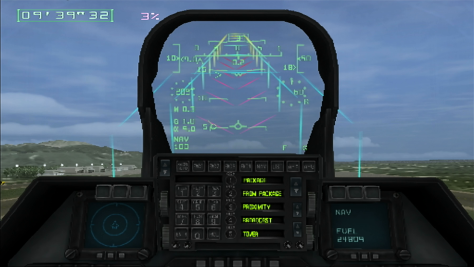 The basic flight and manoeuvring lessons and tests are handled through the use of floating rings that indicate the course you should be taking, the orientation your craft should be following and even the ideal speed you should be going. Controls are explained simply and clearly, and you’re even given helpful suggestions such as what speed you should attempt to leave the ground during takeoff, when you should lower your landing gear during final approach, and how to hold the aircraft stable.

Once you’re into the missions proper, you’ll find yourself visiting a number of different locales around the world, each of which is represented by a relatively small square area surrounded by friendly bases in each of the four cardinal directions. Run out of armament during a mission or get low on fuel and you’ll have to head for a base that is open for business to land, though in most cases early in the game if you’re careful and accurate you’ll get away without having to do this. 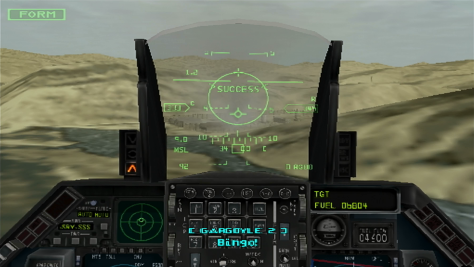 The missions themselves are varied, offering a combination of air interception and ground attack missions. Sometimes you’ll be going on the offensive to take out an enemy installation; others you’ll be in a race against time to deal with enemy forces before they reach a particular destination. Some missions even have little surprises partway through their action — though nothing like the “superweapons” Ace Combat throws at you, mind!

It’s worth emphasising at this point that this is very much a simulation. In other words, don’t expect to be flinging your craft around the sky right from the get-go, because that’s not how real planes work. You’ll find it particularly stiff to try and get the nose down, for example, and paying close attention to the comprehensive information on each aircraft’s head-up display will reveal that the direction you’re pointing isn’t necessarily the direction you’re flying, particularly so far as elevation is concerned. Keep an eye on that altimeter!

Controls work extremely well, with no awkward button combinations required to get things working. Instead, the pad layout is kept relatively simple, and excellent use is made of the PS2’s analogue buttons for things like throttle, rudder and brakes. Where appropriate, a single button takes care of multiple related elements — dropping your gear during landing automatically also deploys the flaps for additional lift, for example. This allows the game to maintain realism without getting too ambitious with button mappings — anyone who ever played EA’s PlayStation 1 port of Wing Commander 3 will know what I’m talking about here!

Further realism is provided by the excellent 3D model of the cockpit in which you sit; you can freely look around using the right stick on the controller or, in combat, make use of a “padlock” view to ensure your point of view is always facing the enemy you’re currently targeting. The instruments in the cockpit actually work in most cases, and learning to parse the information your plane is telling you during flight is of key importance as you progress.

There’s also absolutely wonderful use of sound and controller vibration to enhance the realism throughout. While taxiing and preparing for takeoff, you’ll hear (and feel) your wheels rumbling on the ground. In flight, you’ll hear the air rushing past you as you accelerate, along with your engine tone changing. Full 16:9 display support — relatively unusual for PS2 games, but not unheard of — even means that you can get the game looking decent on a modern TV, though on-screen text such as radio chatter subtitles makes use of a strangely glitchy font that only looks worse when stretched.

Music is absent during your actual flights, allowing you to enjoy these impressive sounds to their fullest, but a series of excellent tracks from Taito’s in-house band ZUNTATA complement the game’s menu screens and post-mission replays. The game may lack the overblown drama of the aforementioned Ace Combat series, but what it loses in this regard it gains in highly convincing realism.

That realism won’t be to everyone’s taste; some may even find it boring. The game makes a few concessions to speeding things along by generally not requiring you to fly from your home base to the mission area or land at the end of the mission — resupplying during a mission is another matter, mind — but you’ll still often find yourself having to taxi from the main area of the base to the runway and await clearance before you can open the throttle and take to the skies. I love this sort of thing; your mileage may, as ever, vary.

Ultimately it’s the realism and the challenges that brings that give Energy Airforce its appeal, though. While some may resent the mandatory training missions before you can get into real battles, these offer their own enjoyable challenges in their own right — something like a jet-propelled Pilotwings of sorts. And when you get into live combat situations, there are plenty of different things to do — and plenty of excitement, whether it’s making a suicidal divebombing run on an enemy installation, breaking hard to try and shake off a persistent missile, or just seeing how hard you can push the three aircraft.

This game brings back extremely fond memories of a very different time in gaming — and proves that the humble PS2 is just as capable of handling a realistic, challenging simulation as the PC is.