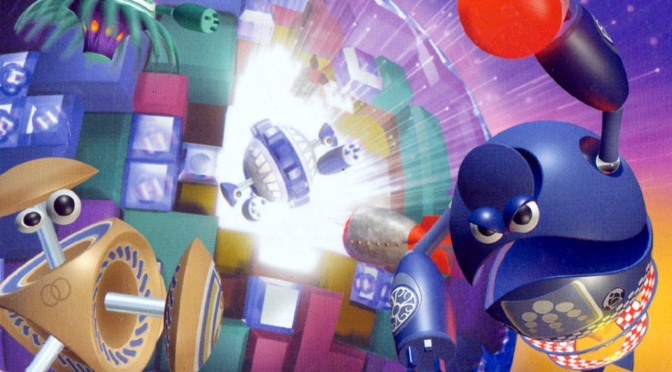 Imagine Tetris. Then imagine it wrapped around a sphere. Then forget whatever you just pictured, because Tetrisphere is nothing like that. It’s still great, though.

Technically Tetrisphere is a little outside of MoeGamer’s normal remit in that it was not developed by a Japanese company, nor was it ever actually released in Japan. It did, however, find its home on a Japanese games console — the Nintendo 64 — and as such it totally counts. Particularly as it’s an awesome puzzle game, and we’re all about awesome puzzle games.

So how can one possibly make something as simple and elegant as Tetris work in a three-dimensional, spherical space? Well, as I’ve previously alluded to, you don’t; you do something a bit different. 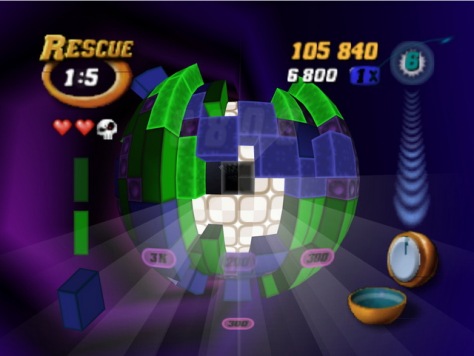 In fact, Tetrisphere wasn’t originally a Tetris game at all; it started life as an Atari Jaguar title called Phear. However, after seeing the game on display at the Consumer Electronics Show in 1995, Nintendo whipped out the rights from under Atari’s nose and subsequently announced that the game would launch on the Nintendo 64 in late 1996 — an announcement which Canadian developer H2O Entertainment wasn’t quite ready for.

Unable to meet the tight deadline, H2O was provided assistance by Nintendo in exchange for some tight (but undisclosed) restrictions on the team. Tetris creator Alexey Pajitnov also contributed to the project’s design elements as a contractor while he was working with Microsoft, which presumably played a part in the name change from the original Phear to Tetrisphere.

The basic mechanic of Tetrisphere doesn’t have much in common with Tetris; the only real link between the two is the fact that many of the blocks you use throughout the game are the same shape as the pieces that fall in Tetris. Rather than creating lines, you’re creating matching groups — in this case of like-coloured similar shapes. 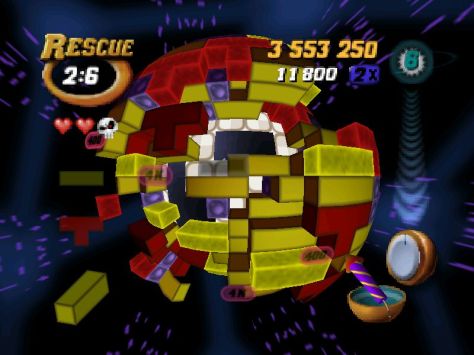 Drop a piece onto the sphere, and if it creates a group of three or more pieces touching — either stacking on top of one another or sitting next to each other on the same layer — and all those pieces disappear. You can also slide pieces around to better set up arrangements that will create large combos or clear spaces for you. Burrow down to the core of the sphere and make a big enough hole in it and you win. Play too slowly or drop too many things in the wrong place and you lose. Simple, right?

It is simple and easy to understand and control, and that’s what makes Tetrisphere such an enjoyable, appealing game, particularly when coupled with its wonderful presentation. The pounding digital electronic soundtrack by Neil Voss is light years ahead of pretty much anything else on the Nintendo 64 in terms of audio fidelity, and when combined with the swirling, hypnotic backgrounds it gives Tetrisphere a delightfully psychedelic feel that it’s easy to get lost in for hours at a time.

On top of that, the game features some immensely satisfying sound effects: a distinctly “juicy”-sounding chime when you move your cursor over a space that will create a match; an addictive, repetitive throbbing sound as the pieces you match disappear one by one; a meaty “thump” when you match a glowing “power piece” for extra points and combo potential. This is a game to play on a good set of headphones, or with the subwoofer turned up high. 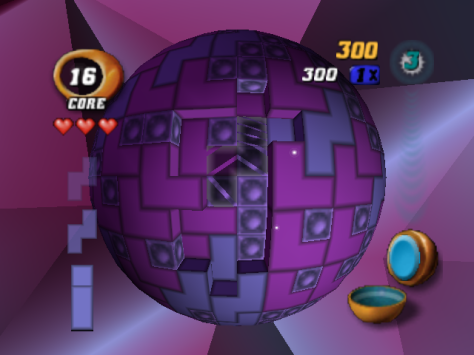 It’s not just about drilling down to the core of spheres with increasingly thick crusts of Tetris pieces protecting them, however; that’s just the “Rescue” mode. Complementing this is the “Hide and Seek” challenge, which presents a wider variety of objectives, including revealing specific portions of the core with images on them, causing a specific brick to drop down to core level, or removing the pieces from around a tower without damaging the tower itself; the “Puzzle” mode, meanwhile, is less frenetic and instead focuses on fully clearing an arrangement of blocks using only a set number of slides and drops.

There’s also a well-implemented versus mode that doesn’t rely too heavily on players attacking one another, unlike many other competitive puzzle games. Rather, it’s about efficiently clearing a path to your sphere’s own core, though you can inconvenience your rival slightly by creating large combos to turn some of their pieces “dark”; dark pieces can only be cleared by matches with adjacent pieces that are part of a combo, not by dropping a piece directly onto them.

Tetrisphere as a whole works well because it has a pleasantly “tactile” feel to it. For once, the N64’s trademark chunky, blurry graphics work in its favour, emphasising the overall dreamy, psychedelic aesthetic and the weighty feeling of the interlocking blocks that make up the sphere. Said blocks disappear with satisfying visual effects, and there’s something undeniably enjoyable about bashing a big hole in something that looked so smooth and perfect at the outset of the level. This is a game about destruction rather than building, but not mindless destruction by any means; once you get your head around the basic mechanics you’ll derive as much satisfaction from creating a neat and tidy  crater in the sphere as  you will from actually clearing the stages themselves.

And there’s a lot of game here to enjoy, too; both the Rescue and Hide and Seek modes feature a large number of levels to clear, which get increasingly challenging as you progress by adding more layers of blocks and tighter time limits — plus the facility to save your high scores to the cartridge. The Puzzle mode, too, is a nice change of pace, though can be a little frustrating if you prefer the somewhat more chaotic play of the other two modes. You definitely have to think about it in a very different way.

Tetrisphere sold reasonably well in its lifetime and enjoyed a solid critical reception on its original release. But while it occasionally puts in appearances in “Best Nintendo 64 Games of All Time” lists, it’s a title that is largely forgotten by many people today. And that’s a real shame, because it absolutely is one of the gems of the N64’s library, providing a completely unique puzzler experience that you simply couldn’t — and indeed still can’t — get on any other console.