Although “gaming YouTubers” have been around for a good few years now, I’ve only really started exploring their work in earnest recently.

One of the channels I’ve grown to be particularly fond of in the last couple of months is The Game Chasers, where two friends named Billy and Jay, who have known each other since the ’90s, travel around various flea markets and game stores in search of retro video games to add to their collection. Their headline videos are inspired by TV shows such as American Pickers, but they’ve carved out their own identity over time and have established themselves as an immensely entertaining channel that is a bit different from your usual Let’s Players and suchlike.

One thing I frequently find myself feeling while watching their videos, however, is a slight pang of jealousy at the awesome retro gaming stores they seemingly have within reasonably easy reach of them. So I was very interested to discover by accident that there is actually a store like this in my neck of the woods. Naturally, I went to investigate.

A little context first. For those who don’t know, I live in Southampton, a moderately sized city on the south coast of the UK. The UK in general is not blessed with a huge number of video game retail chains — at the time of writing, there are only really two of note: GAME, our GameStop equivalent, which sells new games, preowned games for current platforms and merchandise; and CEX, which specialises in preowned games back to about the PS2 era or so, with the odd bit of hardware and software from prior to that if you’re lucky. In Southampton, we have one reasonably sized GAME store, one large CEX and one small CEX.

This isn’t bad, but there’s a limit to what you can find at these places in terms of retro hardware and software. GAME absorbed another outlet called GameStation a few years back when the company was enduring some financial hardships, and this was a bit of a shame, since GameStation was a distinct entity that often had retro computers and consoles dating back to the ’80s. Once all the GameStations turned into GAMEs (or got closed down) the earliest system you’ll find a game for in one of these is now an Xbox 360, PS3 or Wii, and even that probably won’t last for much longer. Much like GameStop in the US, GAME’s focus as a retailer is very much on a combination of preorders for brand new games, additional digital content such as season passes, and merchandise.

CEX fares a little better in this regard since in both the Southampton CEX stores there are substantial PS2 sections with reasonable prices for the most part, but if you’re after games for PS1, Dreamcast or anything earlier you can expect to pay a premium. CEX does have a good mail-order service with some games going for very low prices, but since this involves the games being shipped to you from individual stores all over the UK, quite a substantial portion of your bill ends up going on shipping charges, which are levied on a per-game basis. Plus, you know, there’s still something nice about actually walking into a store, seeing something you want on the shelf and being able to walk out with it. 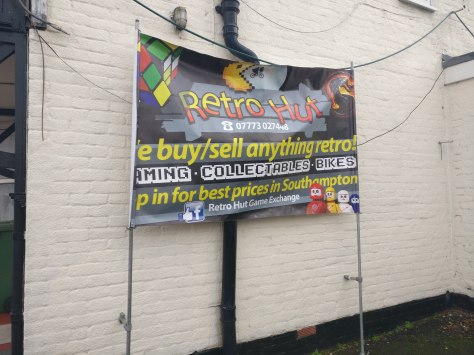 Enter The Retro Hut, a small store situated on Shirley Road in Southampton that you may well miss if you don’t know to be looking for it. Attached to the side of a car retailer, set well back from the side of the road and guarded by a Dalek, this rather lovely little establishment is, it turns out, exactly what I’ve been looking for.

Inside, the store is small but tidy and well-organised, with clear sections for different types of merchandise. The games are mostly shelved on one wall and run the gamut from Sega Master System and Mega Drive up to Xbox 360 and PS3; loose cartridges for platforms such as SNES, N64, Game Gear and Game Boy can be found on and under the counter. Some systems have a noticeably stronger showing than others — Dreamcast games were quite thin on the ground during my visits, for example — but since the store’s stock depends on trade-ins and sales from the public, this situation can and will change over time. 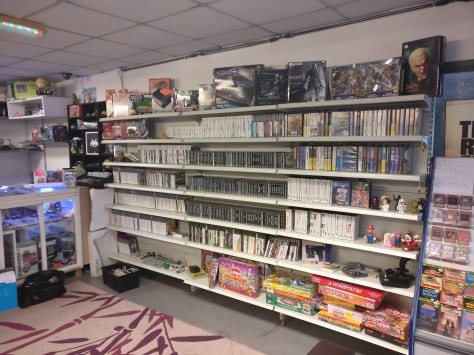 Prices are reasonable, since the store employees describe the philosophy of the store as “wanting to help people rediscover the things they used to love rather than making money” — well, that and wanting to provide a better retro experience than CEX, of course. And in that regard, they succeed admirably, with a good selection that you won’t feel like you’re paying through the nose for; even boxed copies of games aren’t extortionately priced.

The store also sells systems, and again, the prices on these are decent; on my first visit to the store I grabbed a Dreamcast for £50, including two controllers, a VMU and a vibration pack. Unfortunately, the console itself turned out to be faulty, but the team at the store agreed to exchange it with no qualms on a subsequent visit, so I swapped it for an N64 with memory expansion pack. They even gave me a discount on a second controller and the games I grabbed with it to make up for the inconvenience, which suggests to me that they might be open to a bit of negotiation on price or bundle deals if you have the confidence to engage in some Game Chasers-style haggling. I am shy, awkward and autistic, however, so I have not tried my luck at this just yet.

Elsewhere in the store, you’ll find boxed computer games for platforms such as the Amiga, vinyl records, collectible cards, toys and board games. In general, the team seems to have a good sense of what things are worth and prices them accordingly without going over the top, and the owner — who I’m yet to meet or speak with directly — sounds as if they’re open to negotiation and discussion via the store’s Facebook page.

During my visit when I returned and exchanged the Dreamcast, the guys who helped me were extremely helpful, understanding and conversational; while the whole transaction took a little time to sort out due to testing the console and trying to find various cables, it wasn’t a chore or an inconvenience because it was enjoyable and fun to chat about the store, its stock and the systems of the past.

It was a place where I felt very welcome as a retro gaming enthusiast, in short, and as such, despite my unfortunate initial experience with the faulty Dreamcast, is definitely somewhere I’ll be returning to regularly. If you find yourself in the Southampton region any time soon, be sure to pay them a visit.