Later this week, we’re going to take a closer look at Inti Creates’ excellent Blaster Master Zero for Switch and 3DS. So it’s only fitting that we devote a Waifu Wednesday to its heroine.

Blaster Master as a whole actually has rather more detailed lore than you might expect for… well, for something with a title like Blaster Master, and Eve has played an important role in the series’ backstory from the beginning.

However, she wasn’t directly “seen” until the novelisation of Blaster Master by Peter Lerangis (writing under the pen name of A. L. Singer) that formed part of the Worlds of Power series that novelised a number of popular NES games. And then she was completely reimagined for Blaster Master Zero anyway, which had the scope to make a lot more of its narrative context than the NES original did.

Unusually, up until the 2017 release of Blaster Master Zero, Lerangis’ 1990 novelisation of Blaster Master was regarded as canonical by developer Sunsoft despite many of the events depicted in the book not actually occurring in the game itself.

Of particular note in this regard was Eve, who was nowhere to be seen in the original game — largely because the original game was pretty much devoid of any narrative context beyond the initial intro sequence and the blurb in the manual.

In Lerangis’ novelisation, Eve is depicted as a red-haired woman with freckles, but is revealed over the course of the story to actually be some sort of extra-terrestrial entity that has taken on human form to communicate with protagonist Jason. Originally hailing from the planet Signar-el, she “discovered” Earth during her studies, and in the process inadvertently led Blaster Master’s main antagonist, the Plutonium Boss, to the planet. She was initially intending to take on the Boss herself using Blaster Master’s main vehicle, the Sophia III, but cooperated with Jason when he showed up in search of his pet frog Fred.

In Blaster Master Zero, Eve was reimagined to quite a significant degree, but plays a much more prominent role in the narrative. Here, she takes the form of a blonde-haired android rather than a red-haired alien in female human form, and much of Zero’s narrative concerns her having lost her memories and gradually recovering them over the course of her adventure alongside Jason.

There are connections with her original depiction, however; upon Jason’s first encounter with her, Sophia’s hardware reacts strangely to her, and over time it becomes apparent that Eve is intimately familiar with how the wonder-tank operates and what it is capable of. It doesn’t take a genius to work out that she was the original pilot of the vehicle, but after Jason proves himself to be immediately competent at the controls, she takes on a supporting role, offering advice and suggestions on how to proceed and how best to use Sophia’s various capabilities.

Blaster Master Zero also adds an additional ending to the original game; in the normal/”bad” ending, Jason, Eve and Sophia defeat the immediate threat, but unlike in Lerangis’ novelisation, where she remains with Jason and ultimately marries him, Eve refuses to stay behind and ultimately succumbs to the real foe of the piece as she unsuccessfully attempts to defeat it by herself. In the true ending, meanwhile… well, I’ll leave that as something for you to discover by yourself. Suffice to say, it’s a much more satisfying conclusion than the rather underwhelming finale of the original.

If we delve a little deeper, the story gets even more interesting. Blaster Master’s Japanese incarnation wasn’t originally based around the frankly ridiculous plot hook of a mutant frog falling down a big hole and a high schooler thinking a sensible thing to do would be to 1) jump down after it and 2) just hop in the giant red tank that is inexplicably underneath his house; instead, its original release was known as Chou Wakusei Senki – Metafight (or just Metafight for short) and played things a lot more straight. But we’ll get into that a bit more when we explore the game itself in more detail.

What is important from this perspective is that Blaster Master Zero as a whole makes a lot of references to Metafight, particularly when it comes to Eve. Her model number “NORA-2057”, for example, is a combination of references: “Nora” was the name of the organisation Metafight’s protagonist came from, that game’s narrative unfolded in 2052, and Zero released in 2017. Her physical appearance was also based heavily on Metafight secondary character Dr Jennifer Cornet (seen in the original art above), and an off-screen character mentioned in Zero named Dr Jennifer Gardner — strongly implied to be the same person from Metafight, now presumably married to that game’s protagonist Kane Gardner — is revealed to be the creator of both Eve and Sophia III.

Eve herself, in her Zero incarnation, is an appealing character for a variety of reasons. Her giant ribbon and shaggy blonde hair give her a pleasant combination of femininity and being slightly “rough around the edges”, and despite being an artificial life form she isn’t depicted using the usual “robot girl” tropes. She doesn’t speak in a “robotic” style, she doesn’t use overly formal English and she’s capable of using contractions — interestingly, the original, non-robotic Eve from Lerangis’ novelisation was characterised using pretty much all of these clichés, however! 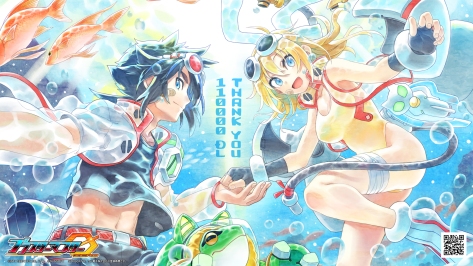 Instead, she’s a likeable character who acts in a helpful supporting role for the duration of the game. There are a lot of interesting and enjoyable optional conversations you can have with her as the game progresses, and she provides some interesting backstory to what is happening, where she came from and what you’re supposed to be doing. Her amnesia isn’t relied on too hard as a crutch to support the developing narrative — largely because the overall story is pretty simple, so there’s not a lot for her to “remember” — so instead her main function is to make the experience as a whole feel a bit less “lonely” than the original game.

And in that respect, she very much succeeds. Because who wouldn’t want a smart, beautiful and reliable android waifu by their side as they drive their bright red super-tank around in an attempt to recover a frog that may or may not be capable of tearing wormholes in time and space?