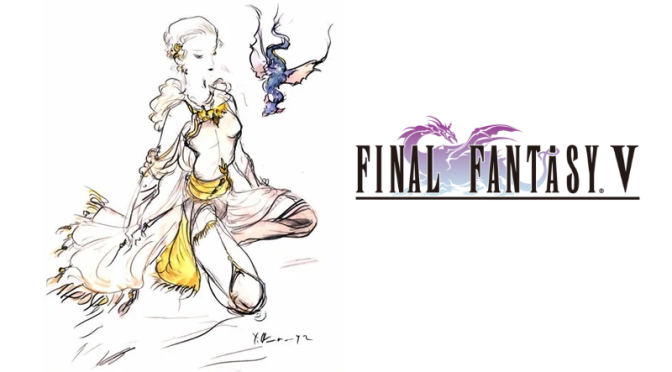 Lenna (as we shall refer to her hereafter, as this is the name used in slightly more recent official localisations of the game such as the Game Boy Advance version and the ugly-ass mobile and PC versions) is one of the first characters we see in Final Fantasy V. It’s her quest to discover the truth behind the actions of her father, the King of Tycoon, and how they relate to the strange happenings that have been occurring around the world.

Over the course of Final Fantasy V’s complete adventure, Lenna shows herself to be a highly capable warrior who is more than capable of throwing herself headfirst into any situation she is confronted with, regardless of how dangerous. She is headstrong and devoted to her cause — and often even puts protagonist Bartz to shame with regard to bravery.

In one memorable scene quite early in the game, she puts her life at risk by rushing through a field of poisonous flowers in order to retrieve the valuable herb that will save the life of her family’s wind drake. From this, we can see that she has a selfless side, but has a particular affinity for dragons. It’s clear that the wind drake has been a valuable companion and friend to Lenna for many years, and that the prospect of it passing away from its wounds is something she is unwilling to contemplate. Her relationship with the drake somewhat mirrors Faris’ relationship with Syldra (also known as Hydra in some translations), for reasons which become apparent partway through the narrative.

Like most Final Fantasy games that focus on a group of Warriors of Light and their efforts to defend the world’s crystals, Lenna embodies a particular element and a closely associated character trait. Specifically, she embodies the element of water and the concept of devotion; in many ways, she is the polar opposite of Faris, who embodies fire and courage, and is rather more coarse and selfish than the kind, altruistic Lenna.

Lenna’s devotion is visible right from the outset of the game; she follows her father after he departs on the wind drake to investigate the Wind Shrine after the wind mysteriously stops. Not long afterwards, she meets main protagonist Bartz and fellow core cast member Galuf, and the three elect to work together in order to protect the Wind Crystal. Bartz is initially hesitant to join the group, but after seeing Lenna’s obvious passion for her cause, and with neither of them wanting to abandon Galuf, who is suffering amnesia at the time, it makes the most sense for them to work together.

Lenna quickly figures out that much of the trouble the group is witnessing is down to overuse of the crystals’ power. As royalty, she is ideally positioned to lead a diplomatic effort to encourage the other nations of the world to tone down their use of this energy — but as it turns out, her efforts are too little, too late.

Rather than abandoning hope and leaving the world to its fate, however, she decides to work with her new teammates to do what they can about the situation — when her Chancellor protests that she has a responsibility to her kingdom, particularly in her father’s absence, her response is simple: “Yes, but more importantly I have a responsibility to the world.” Can’t get more altruistic than that as a head of state, can you? Well, maybe you can. Either way, Lenna’s a good ‘un.

Like most early Final Fantasy characters, there’s a rather marked distinction between Yoshitaka Amano’s original artwork and other depictions of Lenna. Notably, Amano’s design has her with pale, likely blonde hair, but in the game this somehow became vibrant pink. Likewise, in the prerendered video sequence that introduces the PlayStation 1 version of Final Fantasy V, her hair is depicted as an almost ginger blonde-brown, and again this complements Faris, who is shown with blonde hair.

In the Game Boy Advance, mobile and PC ports of the game, dialogue among major characters is shown with portraits based on Amano’s original artwork; here, too, Lenna is shown with pale blonde hair, even though her sprite in the game still has a vivid pink hairstyle in a completely different cut to that seen in her portrait. Fanart of Lenna over the years has generally opted to use her sprite as its basis rather than Amano’s original artwork; prior to the Game Boy Advance version, Amano’s original design for Lenna was rarely seen, after all, whereas her sprite was pretty well-known.

Regardless of what colour her hair actually is, Lenna is a fine example of a Final Fantasy female. She’s one of many badass princesses that the series has played host to over the years, and she always comes across as a highly likeable character — even in the more questionably translated versions of the game out there!

So let’s raise our glasses and drink a toast to the princess of Tycoon; she’s not afraid to do what’s right, even if it’s a long and arduous journey to get things done.