Whew, nearly went to bed without the weekly roundup. That would never do now, would it?

It’s been… a tough week, I won’t lie. Well, actually, it’s been a tough few weeks due to one thing or another, but this week in particular has been one of the worst for a while for reasons that are probably obvious.

Still, one of the best things you can do for your own sanity in trying times is attempt to cling onto at least one little piece of normality… so things have been ticking along here as usual amid numerous instances of uncontrollable crying and bleak depression. Let’s take a look at what you might have missed this week. 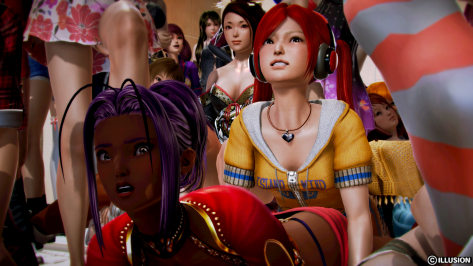 Sunday Driving: More Faster Than I Was – We continue our playthrough of Capcom’s strikingly beautiful Auto Modellista on PS2, and start to encounter a little more resistance from the AI opponents. How much longer will the dear little Yaris last under these circumstances?

Delving into Musou: Warriors Orochi – I’ve been playing Warriors Orochi for a good few weeks now on the Warriors Wednesday series of videos, so I thought I’d write about it in a bit more detail. Although it’s the first game in the series and thus a bit dated in a few ways, I’m having a lot of fun with it so far.

Warriors Wednesday: The Solid Whack You Can Deliver With Wood – Talking of which, this week’s episode sees us taking on a pretty tough challenge as our Samurai heroes and friends come face to face with “wild man” Keiji Maeda.

Waifu Wednesday: The Hundred Honeys Project – Sitri’s Pick – It’s been a while since we checked in on Honey Select Unlimited, so this time around I let the built-in character randomiser do its work to bump up our roster a bit. My computer is starting to struggle a bit under the weight of all these lovely ladies!

Goodbye, Ruby – This, I’m sorry to say, is the thing that happened this week that made things so awful. My beloved, darling cat, Ruby, was in an accident and left this world, well before her time. At the time of writing this, I’m still not quite past the feelings of grief, but I wrote this piece in an attempt to honour her memory.

New Game Plus: That One Perfect Shot – It was tempting to just down tools for the week after that happened, but I already had some new videos and articles in development, so I thought it would be good for my mental wellbeing to try and crack on with things anyway. Here’s the first in a new video series where I explore the postgame content of games, beginning with Project Zero.

Dragalia Lost: You Don’t Pay My Sub – And to wrap up for the weekdays, a look at how Dragalia Lost, for me, scratches a lot of the “MMO” itches without the things that have come to frustrate and annoy me about the genre over the last few years.

This week we have a cool licensed prototype that would later become Star Raiders II, and a bastard hard arcade conversion I am embarrassingly bad at.

I did something on this site this week! Only one thing, admittedly, but I’m getting back into a rhythm. Check out my writeup on the legendary Munchkin.

As always, thank you so much for all your support — and in particular for all the kind words you’ve sent my way this week. I’m… I’m not sure I want to say “okay” at the moment, but I’m hanging in there, and things will be all right in the end. And in the meantime you have an all-new episode of The MoeGamer Podcast to look forward to tomorrow. So please look forward to that!

Have a good week. Have a better week than I did, though that’s not difficult at this point.