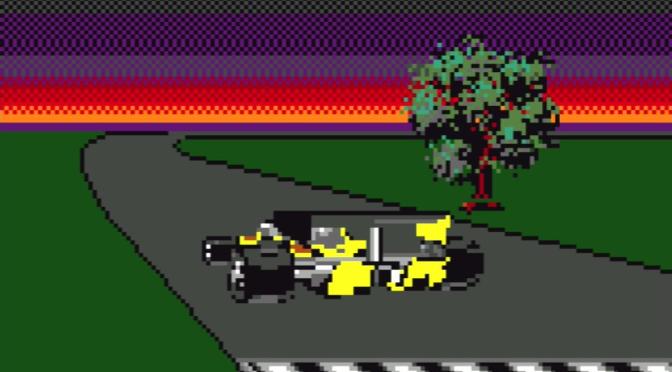 Fun fact: I have the manual for the original Atari Lynx version of Checkered Flag framed in my toilet.

For a certain period during the Lynx’s lifetime, Atari eschewed booklet-style manuals in favour of posters for the games with the instructions on the back. My wife liked the art on Checkered Flag’s instructions sheet — which I somehow still had despite having not owned a Lynx for a good ten years or so — and so we put it up on the wall. Consequently, every time I’m having a poo I get to read those instructions for the umpteenth time.

Believe me, I am now intimately familiar with how to play Checkered Flag effectively — helpful now that it’s been rereleased as part of the Atari Lynx Collection 2 cartridge for the Evercade — and the fact that, in Atari’s own words, the winner of each race is rewarded with “a trophy and a big hug”. And, in a surprisingly progressive, inclusive step for a video game on a failed console from 1991, the manual also takes care to note that said big hug is “where the driver’s gender becomes important”. Oh, also there’s some racing game action in there, too, I suppose; let’s take a closer look.

Checkered Flag is a third-person “vanishing point”-style racing game for the Atari Lynx — that is to say it’s one of those racers that doesn’t unfold in “true” 3D, but rather steering from side to side simply affects your lateral position on the road. Corners push you towards their outside as you go around them; steering around them is necessary to stay on the road and avoid hitting the wide variety of roadside objects, which in Checkered Flag will bring you to an immediate and inordinately frustrating standstill should you so much as clip them with your wing mirror.

In other words, it’s a game that certainly initially appears to follow the mould of Namco’s classic Pole Position, though here the emphasis is very much on racing rather than arcade-style score or time attack. There’s no score or countdown timer system in effect at all, as it happens — fairly unusual for a racer from 1991 — and thus you have the whole race ahead of you to fight your way to the front of the pack… and then try to maintain your lead.

Checkered Flag immediately makes itself stand out by the wide range of customisation options it presents you with when you start the game. You can choose to run a practice race, single event or 8-race tournament; you can choose between zero and nine computer-controlled drone racers to compete against (the Lynx original allowed for six-person multiplayer plus up to four drones on top of that, but this isn’t possible on the Evercade at the time of writing); you can choose the number of laps you want each race to unfold over, between one and fifty; you can choose which of the eighteen courses you would like to race or start your tournament on; you can change your car’s colour scheme and transmission; and, of course, you can select your driver’s gender.

Once you’re into the race, you can run an optional qualifying lap or have a randomly selected starting position — assuming you’re racing against others — and then it’s time to wait for the green light. The game actually eschews the usual conventions of early racing games by the starting grid not immediately disappearing over the horizon and distributing themselves at regular intervals around the course; in Checkered Flag, the game actually bothers to model the performance of all of the participants in the race properly, which means if you’re starting at the back of the pack you’ll actually have to fight your way through to get to the front. Sometimes it can actually be to your benefit to let the field spread out a bit before trying to get ahead, though on shorter races every second counts!

This side of things is one of many areas where Checkered Flag feels like it has significantly more of a simulation-style element than many other racing games of the period, despite its superficial resemblance to the aforementioned Pole Position. The game doesn’t go so far as to require pit stops to refill fuel or change tyres — nor does it feature the highly flammable vehicles of Taito’s Continental Circus — but it does have a distinct feel to it. This is a game where you’ll need to actually slow down for corners — and where it’s actually quite desirable to make use of the 7-speed manual gearbox rather than relying on automatic transmission, since engine braking is a much more efficient and effective means of slowing down than using the car’s somewhat squishy brakes.

Checkered Flag shines with its wide variety of courses. While all of them lack the undulations seen in some of its contemporaries, you’ll actually be grateful for this on some of the more complex tracks, since attempting to navigate their series of labyrinthine corners while also riding a rollercoaster would be extremely challenging. This isn’t to say they’re all super-challenging wibbly-wobbly courses, though; there are several tracks that are pretty straightforward to get around, and quite a few with extremely long, enormously satisfying straights on them that provide great opportunities to overtake your opponents. 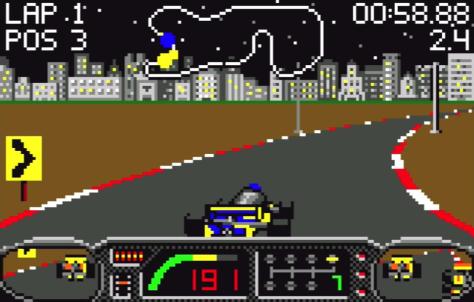 Each track distinguishes itself not only through its layout, but also through its appearance. The game sports a variety of lovely pixel-art backgrounds on the horizon you never reach, and these range from twilight cityscapes to the barns and windmills of rural America. The roadside objects change from course to course too; on the city courses, the roads will be lined with lamp-posts and advertising billboards, for example — with the latter doing a great job in advertising forgotten Atari tech such as the STacy and the Portfolio, as well as a number of Atari Games arcade titles — while the rural courses feature haystacks and cows to crash into.

The game makes heavy use of the Lynx’s hardware sprite scaling capabilities for the cars on the course and the trackside objects, and runs at an impressive, reasonably smooth clip, especially when you remember this was running on a 16-bit handheld in 1991. The sounds are meaty and sound great in stereo, though it’s a pity there’s no option for in-game music. This was nothing unusual for Lynx games, though — since the system’s sound chip only had four channels, most developers prioritised sound effects to provide helpful feedback to the player rather than music, although there are a number of cases where talented developers managed to find a good balance. 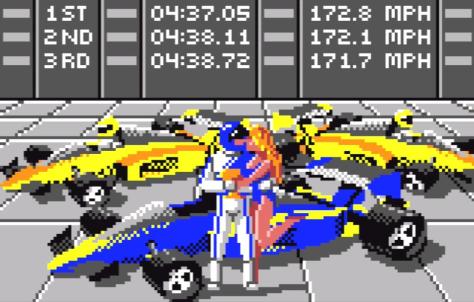 From a modern perspective, Checkered Flag arguably suffers a little from a lack of longevity, because there’s no long-term goal to the game — no career mode, nothing to unlock, not even an ability to save your best times. But again, this is very much in keeping with the arcade-inspired experiences Atari was always known for between the ’70s and the early ’90s. Checkered Flag is not a game that expects you to sit down and engage with it over the long-term — though kudos to anyone with the patience (and/or the battery life) to do a full 8-race tournament with 50-lap races — but rather something that invites you to just have fun for a short period, then set it aside and go do something else.

It’s nice to have games like that sometimes. And the Evercade plays host to loads of them! It’s a delight to return to Checkered Flag after so many years — and still just as rewarding to get that “big hug” after a hard-fought race, whatever your gender might be.

2 thoughts on “Checkered Flag: Where the Driver’s Gender Becomes Important”