Xbox Live Arcade and its contemporaries are interesting places to look back over. Since XBLA and PSN were some of the first high-profile digital storefronts for console gaming, a lot of companies decided to get a bit experimental with their low-cost, download-only releases.

For some developers, this meant the opportunity to experiment with new and exciting styles of game that probably wouldn’t have gotten greenlit by retail publishers at the time. For others, it was a good excuse to return to some of their classic properties that had lain dormant for a while — and a chance to bring these beloved names kicking and screaming into the digital, high-definition age.

Konami’s Frogger: Hyper Arcade Edition from 2012 very much falls into the latter category, as you might expect. And while it’s a far from essential part of any digital console library, it does manage to keep the essence of Frogger intact while providing some intriguing new ways to play — particularly if you have friends over.

Frogger: Hyper Arcade Edition was very obviously inspired by Namco’s successful experiments in updating arcade classics for seventh-generation digital storefronts — titles such as 2007’s Pac-Man Championship Edition and the two Galaga Legions games. It adopts the same kind of “glowing neon” style; it has similarly thumping electronic dance music as its soundtrack; and, most significantly, it offers new ways to play Frogger.

The default mode in Frogger: Hyper Arcade Edition — and the mode you get to try out in the free demo — is known as “Tile Capture”. Here, your objective is roughly the same as in the original Frogger — get your frog across a busy road and a dangerous river to the berths on the other side — but you get additional points for “capturing” tiles on the ground by moving over them, and can temporarily “lock” your captured tiles by successfully crossing the river. Up to four players can play at once — with computer opponents filling in the empty spots if you so desire — and with this simultaneous action, the game becomes as much about area control and screwing over your friends as it is about playing Frogger.

Battle Royale mode is a “Juggernaut”-style multiplayer deathmatch in which your frog becomes temporarily buffed-up after acquiring a lady frog, at which point you can kill the other players and score points by running into them. There are also power-ups in this mode such as reversing your opponents’ controls or teleporting them to random locations. There’s potential for fun here, but it’s a little too chaotic to be manageable, and feels a tad directionless if playing solo against computer opponents.

Lady Frog Rescue is, as the name suggests, a game mode where you have to rescue lady frogs. Unlike in regular Frogger, here you can “rescue” up to three at a time by jumping on them, and you score more points for successfully reaching the other side of the river the more ladies you have in tow. This can also be played with multiple players, and strikes a somewhat better balance between chaos and manageability than Battle Royale does.

Paint mode is a twist on Tile Capture for a single player. Here, you’re presented with a series of tile-based patterns that you need to “paint” by moving over them before time runs out, and you’re not allowed to jump on squares without tiles on them. While you’re painting, you have to avoid the traffic approaching from either side, which often leads to interesting challenges of timing and observation as you work out the best way to safely reach the more awkward parts of the various designs. This mode is fun and feels quite “puzzly”, but doesn’t ramp up in difficulty quickly enough; the whole thing just feels a little too sedate to offer a significant challenge, but it’s an enjoyable way to chill out after the hectic nature of some of the other modes.

Twin Frogger is, as you might expect, a challenge where you have to control two frogs at once while attempting to clear classic Frogger levels. These frogs are a constant distance apart from each other on the horizontal plane, so this mode is mostly about timing your jumps so both frogs can land safely — and no, you can’t do the Super Mario 3D World trick of bunching your frogs up together at the side of the screen to bring them closer together!

Classic mode is just plain Frogger, albeit presented from the same slightly tilted top-down perspective that the rest of the game unfolds from. One of the core attractions here is the fact that you can play with several different tilesets, including a voxel-style one inspired by the arcade original; a “next-gen” (hah) one with more detailed visuals; the “hyper” mode which uses the neon-glow look; and, rather charmingly, three custom tilesets based on Castlevania, Dance Dance Revolution and Contra.

In order to play Castlevania-style Frogger in Classic mode, you’ll need to complete the Challenge mode first, however. This tasks you with a series of score- or survival-based challenges themed around the other game modes, and unlocks various short, amusing movies as you progress. These are somewhat reminiscent of the in-game cutscenes throughout the early Pac-Man games, but they’re buried deep in a menu rather than integrated into the game; that side of things is a bit of a shame, as they’re easily missed. The challenges are fun, though.

Finally, probably the most enjoyable mode for single players is the Frogger Freak-Out mode, which unfolds as a series of short, randomly selected stages picked from all the other game modes, with gradually escalating score- or survival-based challenges to accomplish with each passing stage. This mode has something of a WarioWare-style “microgame” feel to each stage, and is a lot of surprisingly addictive fun; the only slight dampener on the experience is the loading break between each stage, which kills the momentum a little bit. 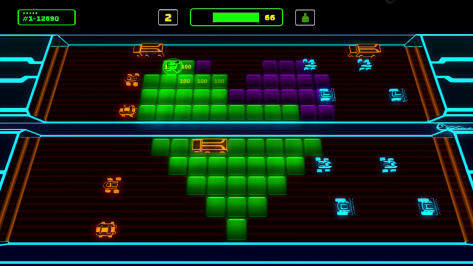 Frogger: Hyper Arcade Edition is a fun twist on Frogger that it’s worth whiling away a few minutes with, and definitely worth giving a shot if you have some friends over. There’s no online multiplayer, sadly, so this is strictly a local affair — but I can see there being some highly entertaining opportunities for trash-talk and screwing one another over in the Tile Capture mode in particular.

There’s just something missing from the whole experience that means it lacks the magic of Namco’s arcade reimaginings, though. I think it’s the level of exaggerated bombast that Pac-Man Championship Edition and its ilk did things with; those games were all exploding with colour and particle effects, giving you a real sense that the creators wanted the player to feel as much joy playing the game as they clearly did making it. Frogger: Hyper Arcade Edition just feels like it falls a little flat in this regard by comparison; it feels like it’s playing it a bit safe, and not quite wanting to truly let loose with over-the-top nonsense. It’s a shame.

The game does feature Buckner & Garcia’s classic track Froggy’s Lament from their album Pac-Man Fever, however, which shows that at least someone on the team was willing to poke fun at themselves…

2 thoughts on “Frogger Hyper Arcade Edition: Froggy Moves One Step At a Time”