Atelier Iris 3: Grand Phantasm has an unusually small playable cast compared to other installments in the series. This is primarily down to the fact that two of the three playable leads are able to switch “Blades” any time they return to town, effectively giving them the functionality of multiple party members.

One of those privileged two is Nell Ellis, an energetic young woman who joins main protagonists Edge Vahnheit and Iris Fortner after getting into a fight with her sister Yula over the pair’s reasons for coming to the town of Zey Meruze. Yula appears to believe that the former prosperity of the Ellis family must be restored, regardless of cost, while Nell takes the rather more down to earth — and, it has to be said, friendly — viewpoint that they should make the best of the situation they’re in rather than moping over the glory days or doing something they might regret.

She’s a thoroughly likeable character, infused with a huge amount of personality over the course of Atelier Iris 3: Grand Phantasm, so let’s take some time to appreciate her! 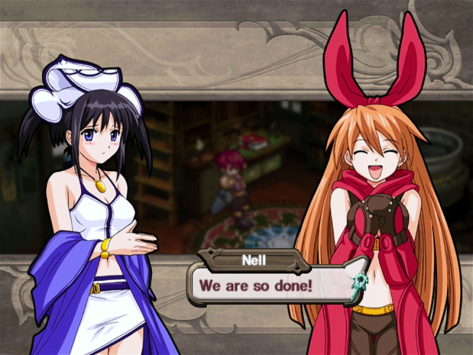 You first encounter Nell in the game after witnessing the aforementioned argument. Nell and Yula came to Zey Meruze in order to become Raiders, who are adventurers that seek their fortune through completing quests for the local Guild. Completing quests involves venturing into numerous “Alterworlds”, each of which have their own mysteries to solve, but Yula seems primarily concerned with little more than acquiring as much power as she can as quickly as possible.

When objecting to this, Yula casts Nell aside and decides to go it alone; shortly after, a rather distraught Nell finds herself welcomed with (mostly) open arms by Edge and Iris, who agree to put her up in their house at least until this situation with Yula is resolved. Over time, Nell becomes an important, irreplaceable part of the team as a whole, beloved and cared for by both Iris and Edge, who end up forming something of a surrogate family for her over the course of the narrative.

Nell is an energetic girl who is sometimes lacking in common sense. This can be seen through the way she often makes sarcastic quips out loud seemingly without any regard for anyone who might get offended — though it’s clear she never actually means any offense; she just thinks she’s being funny. It can also be seen in something as simple as her in-game animations: her default “running” animation has the youthful exuberance of a child, and she inevitably skids to a halt in an exaggerated fashion when she stops rather than stopping, you know, normally.

This carries across into battle, too; her default Blades features a move that sees her throwing herself lance-first at enemies while screeching “sorry, sorry, sorry!” at them, before falling flat on her face in a thoroughly undignified manner. Her other Blades see her maintaining somewhat more control over her overall posture for the most part, but she does still do a fine line at screeching things very loud indeed for added effect under most circumstances. 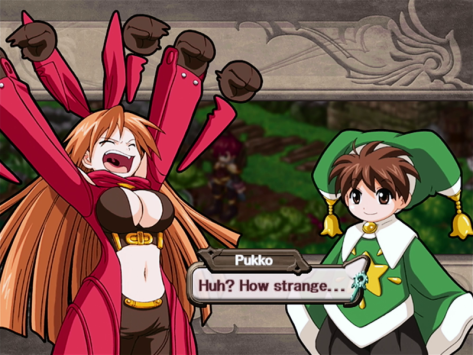 Design-wise, Nell is an interesting blend of elements. Her face and hairstyle are very ’90s anime in a similar fashion to Blaire the baker from Atelier Iris: Eternal Mana, though Nell is a little less “princess” and a little more “rambunctious tomboy” a lot of the time. She is one of the most expressive characters in the game, making use of a wide variety of different poses in both her dialogue bust shots and field sprites, and is a definite contrast to the relatively subtle changes in expression and posture that both Edge and Iris display.

She’s a good complement to them, in other words; between the three of them, we typically have Edge as the straight man, Iris occasionally indulging in some subtle, gentle and rather innocent humour, while Nell is frequently crass in a “well, I’m just saying what we’re all thinking” sort of way. The dynamic works really well, and leads to a variety of amusing moments throughout the narrative.

I can’t put it off any longer: we can’t talk about Nell without acknowledging her honking great boobies and her complete lack of shame at showing them off. Interestingly, in contrast to a lot of modern anime-style role-playing games, not a single person comments on them over the course of the entire narrative; likewise, Iris never displays any sort of inferiority complex over her rather more modest assets in comparison to Nell.

It’s a rather subtle means of suggesting that the group are completely comfortable with one another, and all of them recognise that they each have their own unique things that they bring to the table; they don’t need to be jealous of one another for any reason. Boob jokes often relate to a character’s overall insecurity in who they actually are, not just their cup size, so it was rather pleasant to play an RPG where all of the central cast were seemingly perfectly happy with the people that they’ve defined themselves as. And, moreover, accepting of one another, flaws and all.

While Iris may be more important to the overall narrative — the game is named for her, after all — the experience as a whole just wouldn’t be the same without the presence of Nell. And the deliberate decision to keep the playable cast to just three characters means that you get to know her very well over the course of the complete adventure.

With that in mind, pretty much everyone should walk away from Atelier Iris 3: Grand Phantasm with at least a few good memories of their time with Nell… and, if you’re anything like me, keenly missing her when your time together is at an end!