After checking out the not-very-good-but-I-still-like-it Atari ST version on Atari A to Z earlier this week, I thought it was worth taking a closer look at the arcade original of S.T.U.N. Runner.

It’s an interesting game, for sure; although Sega is widely credited with popularising the polygonal racer in arcades thanks to its excellent Virtua Racing, Atari Games had actually been experimenting with filled 3D racers for some years previously.

Probably the most well-known of these is Hard Drivin’, a game that took itself a little too seriously — to date it’s still the only arcade racer I know of with a clutch pedal — but the futuristic bobsled run that is S.T.U.N. Runner was also innovative in its own way.

First released in 1989, S.T.U.N. Runner casts you in the role of a racer in the Spread Tunnel Underground Network (S.T.U.N, you see?). Your goal is nothing less than The Ultimate Challenge — a lengthy (well, three-minute) course that tests every ounce of your S.T.U.N. running skill.

Yes, S.T.U.N. Runner is a futuristic racer — and one that came out a full year before Nintendo’s F-Zero, the game that many people cite as the genesis of the subgenre. It set many of the expectations for the genre that we’ve come to expect today, too: a combination of racing and combat; undulating, roller coaster-style tracks; extreme speeds; and a unique sense of atmosphere.

S.T.U.N. Runner distinguishes itself from later takes on the futuristic racing subgenre through its control scheme. And there are two distinct styles of control you need to get used to during play. 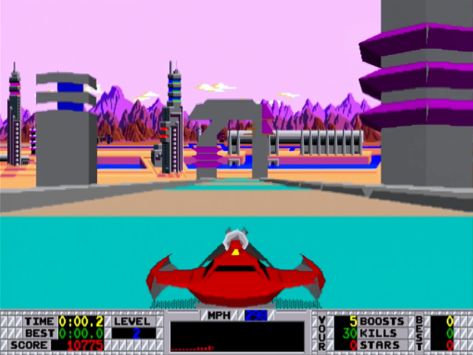 Firstly, when racing on the flat sections of track, the game handles like a “vanishing point” racer, with left and right movements actually sliding you from side to side rather than making you turn. In this way, there’s no means of getting turned around or into a position where it is difficult to recover; the most that happens even if you suffer a terrible pile-up is that you lose a bit of speed.

The big adjustment when coming from more modern takes on the genre comes when you enter a tunnel. Here, turning left and right causes you to slide up the respective side of the tunnel, and in order to keep your speed up you do not steer around the corners; rather, bobsled-style, you ride the outer wall of the tunnel.

The original arcade machine used a futuristic set of handlebars that concealed a variation on Atari’s classic paddle controller, making for extremely quick and responsive handling. This has a bit of a side-effect when played on a home system via an emulator or as part of the third Midway Arcade Treasures compilation, however; while paddle controls tend to port quite well to analogue joypads in theory, they can often seem extremely “twitchy” and oversensitive. This is certainly the case here, but a bit of practice will allow you to adjust. 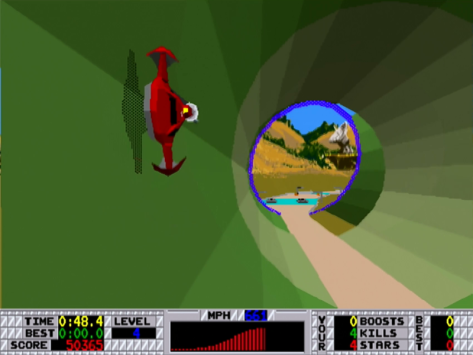 Normally, the advice I’d give is to slide around the circular perimeter of the analogue stick rather than simply moving left and right, as this provides a more close approximation of a paddle controller’s “dial”. However, in S.T.U.N. Runner there’s an additional wrinkle: you can aim your guns up and down by pulling the stick backwards and forwards, and in later levels this is essential to deal with airborne enemies. Consequently, you’ll need to make sure that trying to smooth out your steering doesn’t mess with your aiming.

Combat in S.T.U.N. Runner is a fairly major element, though you’re not directly racing against opponents in this. Rather, the enemies you encounter along the way are obstacles, each with their own unique type of behaviour, and in order to make it to the finish line on time, you’ll need to skilfully avoid or destroy them.

Most enemies can be taken down with a well-aimed laser blast or two, but armoured drones require the special “Shockwave” weapon that can only be unlocked by collecting a special symbol or collecting a requisite number of stars on the previous course. This blasts forwards in a satisfying late-’80s burst of polygonal lightning, wiping out everything in its path and shattering them into a shower of triangles. 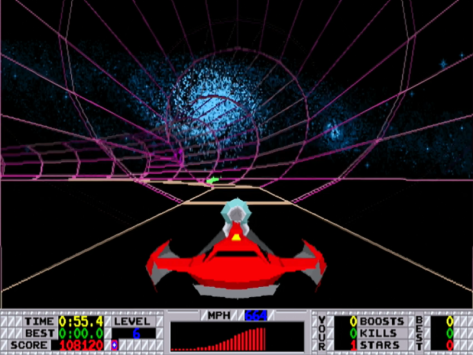 As you progress through the game you’ll start to encounter more and more course elements, beginning with boost pads that accelerate you considerably and make you temporarily invincible, and continuing on through branching pathways, sections of tunnel that are under construction, jump ramps, narrow flats and plenty of different types of foe to blast out of your way.

The game is rather well-paced in this way; the early levels introduce each new concept to you one at a time until you have the basics down, then the rest of the game continues a drip-feed of new features that build on the things you’ve already learned.

Every few levels, there is a Challenge stage. Each of these tasks you with doing something specific: on the first, for example, you have to hit as many boost pads as possible; on another you have to collect as many stars as you can; on a third you have to destroy as many enemies as possible. You don’t have to actually complete the challenge stage; just try and set a high score. And interestingly, each Challenge stage has its own unique high score table based on its specific objective; this is a really nice feature that allows even those who aren’t able to make it to The Ultimate Challenge to feel like they can be competitive in at least part of the overall experience.

By modern standards, it’s easy to see that S.T.U.N. Runner had the unenviable task of trying to establish a new subgenre, and consequently it had a few teething problems along the way. It’s twitchy and difficult to control; it’s arguably a bit too fast when its rather technical, twisting courses are taken into account; its time limits are very harsh, even on the easiest difficulty setting; and the boost pads make one of the most horrendous noises I’ve ever heard come out of an FM synthesiser chip.

It’s still really fun, though, and well worth revisiting today, for numerous reasons. Not only did it help to define what would become a popular subgenre of racers, it’s a game that often gets forgotten about today in favour of later, more well-known titles. It’s also an surprisingly attractive game considering its age; its early, low-poly 3D combined with multicoloured shading to simulate light-sourcing and some truly lovely pixel art backdrops make for a very distinctive look, and the harsh FM sound typical of Atari Games releases throughout the mid to late ’80s makes for an intense, almost oppressive and sinister atmosphere at times that really works to give the game a strong sense of character. 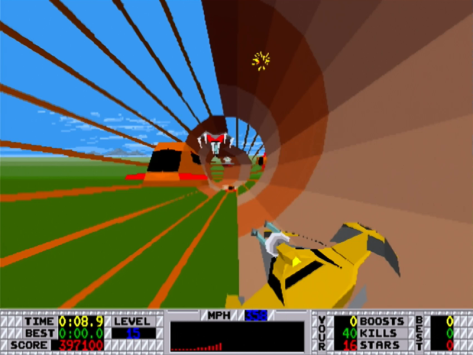 Is it an F-Zero beater? No, of course it isn’t, but it is, regardless, a good use of your time if you fancy a bit of classic white-knuckle racing.