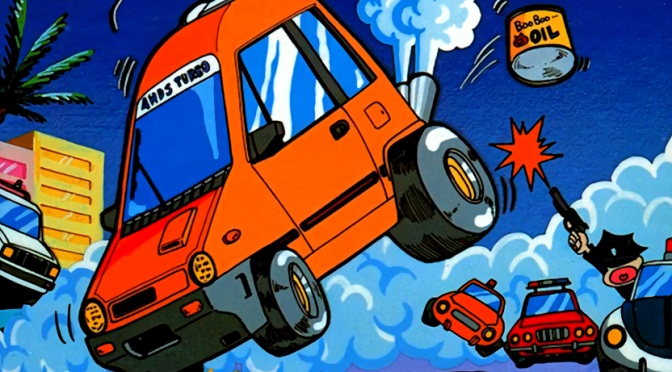 City Connection by Jaleco is by no means a classic of the NES age; it tends to be either forgotten or greeted with a resounding “meh”, if it ever comes up at all.

The game’s recent addition to the Nintendo Switch Online NES app reminded me that I’ve always been rather fond of it, though, and there’s a few interesting things about it, too!

Strap in and let’s take a look, then.

City Connection began life as an arcade game, originally released to arcades in 1985. The arcade original cast the player in the role of a blue-haired girl named Clarice driving a Honda City hatchback in an attempt to tour the world and find the perfect man. In order to accomplish this, she must, for some reason, paint all the highways in twelve different locations around the globe while attempting not to be caught by the police or run over any cats.

Clarice isn’t completely defenceless; she’s able to launch oil cans she’s picked up at her pursuers, which will cause them to spin out for a moment. While they’re spinning, crashing into them will knock them off the stage for a moment’s reprieve. The cats, however, cannot be defeated, and spending too long on one of the highways causes spikes to appear. And you thought your commute was painful.

The game was ported to Famicom a couple of months after the arcade release, but it wouldn’t reach North America until 1988 — and inexplicably, its localisation replaced Clarice with an unnamed blonde male protagonist, and the backstory now involved our hero stealing a bunch of white paint and leaking it everywhere.

The game did, however, retain the recurring “love heart” motif from the original, making for a certain amount of tonal inconsistency. Good job narrative didn’t really matter in many games from this era, huh?

Conceptually, and love hearts aside, this new setup arguably makes a bit more sense when bearing the core mechanics in mind, but c’mon now. Clarice was cute. (Side note: Clarice actually appears as a DLC character for modern shoot ’em up Game Paradise CruisinMix, so we did get to “meet” her here in the West eventually.)

Given its driving theme, it may surprise the unfamiliar to discover that City Connection is not a conventional racing game. Rather, it’s a side-on platformer that gamers of a certain age may note bears something of a resemblance to 8-bit home computer classics Miner 2049’er and Mr Robot and his Robot Factory, both of which, like City Connection, are games that unfold over small, self-contained levels and require the player to “touch” every spot of the floor in order to progress onto the next stage. Whether this resemblance is deliberate or coincidental is something seemingly lost to the mists of time, but those two games came out in 1982 and 1983 respectively so one can draw one’s own conclusions if one sees fit to.

To be fair to City Connection — and bearing in mind that Atari rather notoriously failed to “break Japan” in the ’80s — there are a whole bunch of unique wrinkles to Jaleco’s game, and they mostly revolve around the fact you’re driving a car rather than controlling a fat, perpetually smiling mountie or a squeaky robot. Don’t mistake this for any sort of “realism”, mind you; the setup of the game means that Clarice/BlondeGuy’s Honda City is capable of jumping to astonishing heights, and each of the locations features “highways” seemingly suspended high in the air, defying gravity. These two factors are, of course, related.

The main twists on the standard platforming formula come in terms of how the Honda handles. Turning around causes an actual “turning” animation rather than a simple, immediate reversal of direction, meaning there’s a certain amount of “stopping distance” and “turning circle” if you’re trying to avoid an obstacle (such as those damned cats). And to make matters worse, while accelerating in the new direction the car unavoidably pops a wheelie, during which you are unable to jump. You can also vary the height of your jump by pushing up on the stick while leaping, or fall quickly by pulling down on the stick. In other words, the controls are a little more complex than you might expect from an arcade platformer of the time.

The upshot of these movement mechanics is that the levels turn into puzzles of sorts. The early stages are pretty straightforward, but as you progress you’ll find yourself in situations where it appears to be impossible to jump from one section of highway to another. You’ll need to get creative at times, often combining manoeuvres such as the high jump and the turn in order to land where you need to go — and all the while you’ll need to be watching out for your police pursuers and, once again, those damned cats.

One interesting component of City Connection is its soundtrack. The early levels are accompanied by chiptune rock and roll interpretations of Allegro non troppo e molto maestoso from Tchaikovsky’s Piano Concerto No. 1, of all things — complemented by a dodgy FM approximation of the riff from Highway Star by Deep Purple on the original arcade machine’s second level, fact fans — and hitting one of those damned cats treats you to a rendition of a piece of music that has a wide variety of names across the world.

You may know it as “Flohwalzer”, “Flea Waltz”, “La Chocolatera” or, here in the UK, “Chopsticks” — though note that British “Chopsticks” is apparently different to American “Chopsticks”. (I’ve learned a lot of information I really didn’t need to know today. Maybe I should attend more pub quizzes.)

Why “Chopsticks”? Well, because in Japan, that piece of music is known as ねこふんじゃった — neko funyatta, or “I Stepped On the Cat” — a perfect piece of music to watch a flag-waving cat majestically (and rather smugly) drift slowly off the screen as you lose yet another life due to your inattentiveness. Sigh. 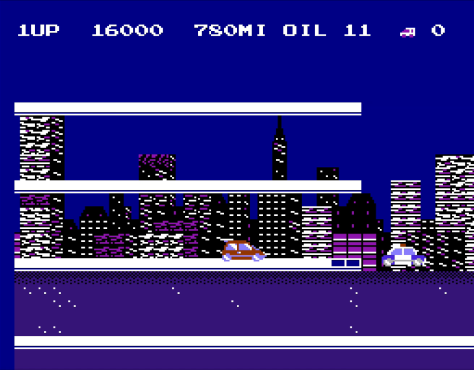 City Connection is an acquired taste, for sure, mostly thanks to its deliberately clunky controls — but let it get its hooks in and you’ll find a surprisingly addictive score-attack arcade game here. It’s a fun addition to the NES app on the Nintendo Switch — and if you’ve got access to that anyway, it can’t hurt to just have one little go, now, can i– DAMN YOU CAAAAAAAATTTTTTT