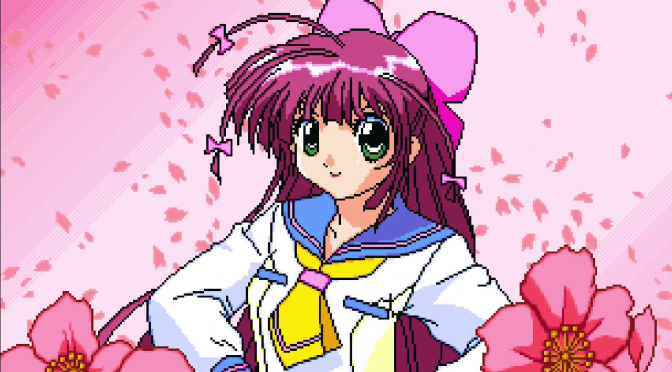 Money Puzzle Exchanger is a 1997 release from Japanese developer Face that began its life on the Neo Geo MVS system before later being ported to Game Boy and PlayStation. These days, it’s pretty easy to get hold of in its initial incarnation thanks to it being part of Hamster’s Arcade Archives series, whose various releases have found their way to numerous platforms over the last few years.

And that’s fortunate, because Money Puzzle Exchanger is a great game that is well worth your time and… well, money. 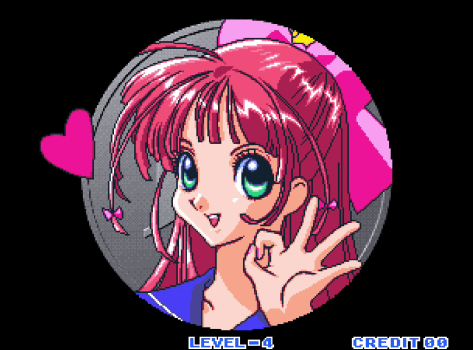 In Money Puzzle Exchanger, you’re confronted with a bin full of coins of various denominations — yen in the original Japanese release, but simply generic coins in the worldwide version. Clearing the board isn’t a simple matter of making matches, however; your job is to gather change together and “exchange” it for a coin of the next highest denomination. You repeat this process until you create a 500-yen coin — matching two 500-yen coins causes them to disappear completely.

The way you gather change works rather like Data East’s Magical Drop series. You control a small figure at the bottom of the bin, who can quickly shift from column to column. The tap of a button grabs all coins of the same denomination in the column above the character, and a tap of the other button sends all held coins shooting back into the currently occupied column. You can gather as many coins of the same denomination as you like into the character’s “hand” at once; you can’t mix them, however.

Making an exchange requires you to match at least the value of the coin you’re trying to create by shooting coins of the same denomination into an orthogonally adjacent arrangement. You need five one-yen coins touching either horizontally or vertically (or both) to create a five-yen coin, for example, but only two 50-yen coins to create a 100-yen coin. You don’t get additional points or coins for matching more than you need to make the exchange, but this can be a good way of clearing the board.

Like most puzzle games, it’s possible to set up chains by ensuring the exchanges you create fall into strategically advantageous locations. The coin that is created as the result of an exchange lands where the coin you shot hit the arrangement, so using this knowledge you can set things up accordingly and plan ahead. However, this is where Money Puzzle Exchanger’s big difference from most other puzzle games becomes apparent: in all cases except matching the two 500-yen coins, you’re left with at least one piece on the board rather than completely clearing a space, so it’s much more difficult to create combos by shooting things into gaps while previous exchanges are still disappearing.

The resemblance to Magical Drop is so obvious that Data East supposedly sued Face, and this, in turn, is widely believed to be what caused the latter to go bankrupt, but these appear to be unsubstantiated rumours more than anything. However, regardless of the truth behind the rumour, two things are absolute facts: this was Face’s last game for consoles, and just a few subtle mechanical differences mean that despite superficial resemblances, this game plays very differently to Magical Drop.

Probably the most significant difference in mechanics is that in Magical Drop, you need to create a vertical match of the same colour; this can subsequently attach horizontally to further orbs of the same colour, but the arrangement you actually shoot into must be vertical. In Money Puzzle Exchanger, meanwhile, you simply have to create an arrangement of sufficient coins that are adjacent to one another orthogonally. This may sound like it’s easier and more forgiving, but remember that it’s a lot more difficult to clear the board in this than Magical Drop, so a bit more lenience was definitely required for balance! 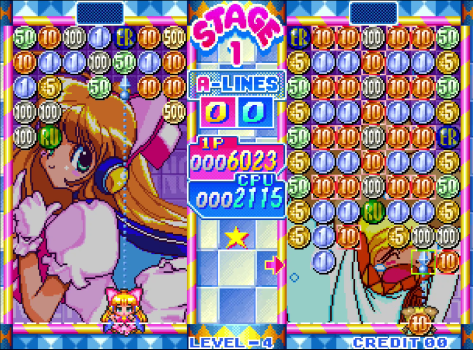 The game can be played in two different ways. Firstly, there’s a single-player endurance mode in which you simply have to keep clearing coins for as long as possible as new lines are periodically added at the top of the screen. Once the bin fills, you lose and are provided with a rating according to various factors including how long you lasted, the level you reached, how many chains you created, the biggest chain you created and your final score.

Secondly, there’s a versus mode that can be played either against the computer through a linear sequence of stages, or against a second player. In this mode, much as in Magical Drop, successfully completing chains adds additional lines to the top of your opponent’s screen, pushing their whole arrangement down and forcing them to act quickly before they’re overwhelmed. This is monstrously difficult in the versus computer mode… or perhaps I’m just not very good at it! 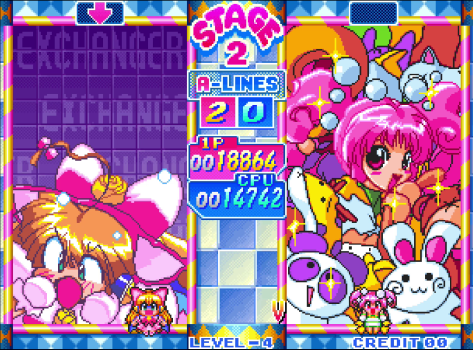 Finally, it would be remiss of me to talk about Money Puzzle Exchanger without mentioning one of its most distinctive features: its audio-visual presentation. Featuring character designs by Atsuko Ishida of Magic Knight Rayearth fame, some gloriously cheesy ’90s music and a wholehearted embracing of the mahou shoujo theme popularised by Sailor Moon throughout the 1990s, this game remains one hell of a looker today. Even if you find the mechanics difficult to grasp — they are! — it’s hard not to keep coming back for more just to engage with these delightful and adorable characters and the wonderfully silly animations they perform in the background of the gameplay.

Rather oddly, the original Neo Geo version of the game featured absolutely no narrative context whatsoever for why magical girl “Exchanger” was battling a series of opponents using coins. A story mode was, however, added to the Japan-only PlayStation release of the game — and quite amusing it supposedly was, too. At the time of writing, I haven’t had the opportunity to check that particular version out — but if you’re curious, MonkeyPaw Games were good enough to bring it West (untranslated) for PS3, PSP and Vita; you can find that version on the North American PlayStation Store for just $5.99.