As we’ve discussed on numerous previous occasions, the shoot ’em up genre is a lot more diverse than you might think.

Over the years, we’ve seen this initially straightforward genre blossom into something that encompasses a wide variety of distinct mechanics: the precise navigation of danmaku games, the pattern recognition and twitch reflexes of twin-stick shooters, the emphasis on memorisation and “risk versus reward” of Gradius-style games and plenty more besides.

One of the most interesting ways in which developers have experimented with the genre as a whole is through combining it with other genres. To date we’ve seen attempts to blend it with fighting games (such as the Suguri series), platform games (such as Rabi-Ribi) and even puzzle games. Murasaki, a 2014 release from Japanese doujin circle Katatema, falls into the latter category.

In Murasaki, you take on the role of one of two different characters: Kairi (a somewhat feminine-looking boy) or Satsuki (a rather boyish-looking young girl). Taking on one level at a time rather than an arcade-style complete “loop” of the game, it’s your job to avoid swarms of bullets and defeat a series of enemies in a quest to save a mystical world that is being threatened with destruction.

Yes, like many doujin shoot ’em ups, Murasaki has a narrative as you progress through its various stages… and like many doujin shoot ’em ups, it’s not really necessary to understand what is going on to enjoy the game. In some ways, the wordless story created by the beautiful animated backdrops that accompany all the action is more compelling than the actual dialogue, but clearly there’s been some effort to set up a world, some characters and some conflict here.

With a few notable exceptions — the long-running Touhou Project being probably the most prominent — the vast majority of shoot ’em up players are not there for the narrative, however. They’re there for the mechanics, and it’s here that Murasaki really delivers, offering a very distinctive experience to almost any other shoot ’em up you might have played… with the possible exception of the Every Extend series.

Murasaki is all about explosions and chain reactions. Rather than shooting down enemies directly, most of your contribution to any given playthrough involves dodging bullets and triggering explosions to clear pathways for yourself. You can only fire one bullet at a time — with Kairi and Satsuki’s method of firing differing quite significantly, making the game “feel” very different with each — and its main purpose is to knock coloured blocks around the screen rather than defeat enemies directly.

Hit a block with a bullet and it will “activate”, then bounce away according to where you hit it and explode after a short period. If it hits another block of the same colour during its bounce, that block will also activate, allowing you to set up chain reactions and create screen-filling sequences of explosions. Any white bullets caught in an explosion will be cancelled, and if you’re fighting a boss they will be reflected back to the boss, dealing damage to them. Coloured bullets, meanwhile, have to be hit several times before they can be cancelled.

The playable characters also have access to a special ability that is limited in usage, similar to a conventional shoot ’em up’s “bomb” function. This can be charged up by pressing the second fire button, and will be more powerful if you hold it for longer. Special attacks begin with a floral-inspired rotating “shield” that cancels all bullets in the area it covers, and then follow up with a character-specific attack pattern that you’ll have to experiment with in order to make the best use of. 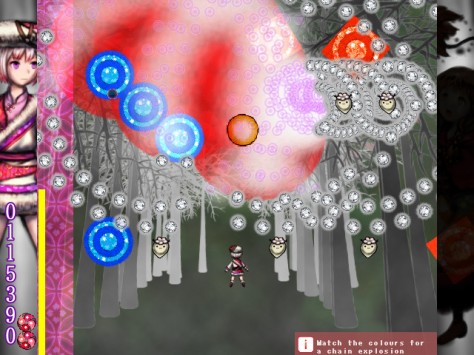 Each stage follows a distinct, learnable pattern similar to a conventional danmaku game, but there are semi-randomised elements along the way to keep things interesting. And as with danmaku shooters, the hitbox of your character is very small, meaning developing an understanding of exactly what tiny gaps you can safely fit through is essential to success. The stages also have distinct visual and musical themes that make them feel unique rather than “more of the same” — though the way the second stage starts with a seemingly unavoidable barrage of bullets is initially rather offputting until you figure out how to deal with it!

The presentation, despite being low-resolution 640×480, is beautiful — and in a pleasant acknowledgement to owners of widescreen displays (which is probably most PC owners these days), there is the option to deliberately distort the game’s aspect ratio without changing the resolution so it appears “correctly” on a 16:9 monitor or TV.

The dynamic three-dimensional backdrops are colourful and delightfully animated without being distracting, and the soundtrack is excellent, complementing the on-screen action well rather than just being generic background music. In many ways, the coherent presentation of the game gives it the feel of being an interactive, artsy CG “movie” as much as it is an addictive puzzle-shooter; it really is a pleasure to experience. And for a further fun fact, I discovered completely by coincidence that the music is composed by watson of MusMus, who is the person behind the royalty-free tracks I use in my MoeGamer and Atari A to Z videos on YouTube!

Murasaki was originally a freely downloadable game in its original Japanese incarnation, so you might wonder why Western publisher Playism is charging money for it. Well, sure, you absolutely could go and just download the original Japanese version for free from the creator’s website — or you could support their quality work in creating a unique interactive experience, as well as Playism’s valuable work in making titles like this way more visible than they otherwise would be, particularly in the West. Solid creative work deserves to be rewarded. 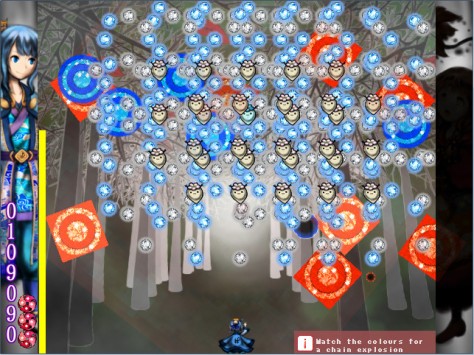 Plus, you know, it’s £4. You can barely buy a coffee for that these days. And even the best coffee doesn’t look, sound and feel as good as playing Murasaki.

One thought on “Shmup Essentials: Murasaki”