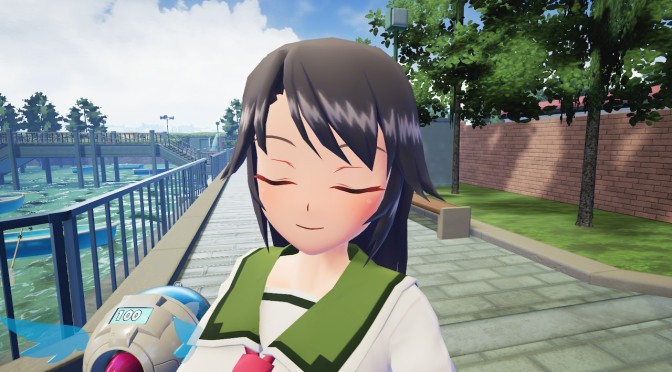 It’s almost time to say goodbye to Sakurazaki Academy — at least until our next visit — but I couldn’t leave without showing at least a bit of appreciation for some more of the extended cast.

As you’ll hopefully recall, Gal*Gun 2 includes a feature known as “Rendezvous”, where once you’ve acquired the phone numbers of any of the secondary cast (and, under certain conditions, the main cast of heroines) you can invite them to several places, chat with them, fill them with sugar, look up their skirts and stand uncomfortably close to them in an attempt to indicate that you might want a kiss. Wholesome!

Today I thought I’d focus specifically on the third-years of Sakurazaki Academy, as I feel they were a little under-represented last time around. So let’s contemplate further the age-old question of Who Is Best Girl?

Kazami is quite a character. Referring to herself as “onee-san” when talking to the player-protagonist — who is canonically a second-year, so technically Kazami’s underclassman — she’s a rather fun character to hang around, and her backstory of almost getting kicked out of the school’s Curry Lovers Club for cooking a tikka massala is oddly charming. 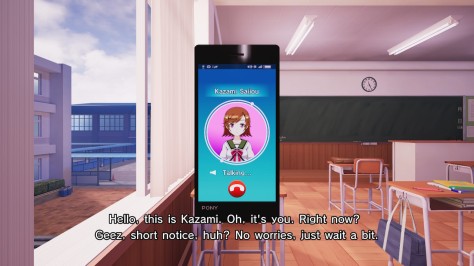 Rather informal in her tone and clearly not too worried about social niceties, it seems Kazami is someone who is keen to be liked, despite obviously having her own way of doing things — whether that be interacting with others or cooking curry.

She’s keen to please; she offers to take the protagonist out for hamburgers and pay for his share as well as hers. But she also has a bit of a selfish side, too; when the pair become closer, she expresses concern about him seemingly being popular with other girls. How little she knows.

See a twintailed girl and your mind is probably going to go to one of two places: tsundere or adorably cute girly-girl. Mei subverts these expectations by not really being either; instead, she’s a delightfully foul-mouthed girl who isn’t afraid to speak her mind — though this has gotten her into trouble on more than one occasion.

She’s also one of the few characters in the cast depicted as having a life outside of school and its clubs — she has a part-time job in a restaurant, and has, much to her chagrin, proven herself to be highly capable at washing dishes. So much so, in fact, that her manager cancelled an order for a dishwasher so she could stay in the kitchen and wash up.

Of course, talking to her a little bit reveals that his decision may also have been somewhat influenced by his desire not to have a potty-mouthed waitress on his staff, however cute she thinks the uniforms might be!

Madoka is one of several characters who provides callbacks to both Double Peace and the original Gal*Gun in that she has ties to the band LOVE HEARTS, fronted by Aoi Uno. Aoi was a main heroine in the first Gal*Gun game and also showed up as a shopkeeper in Double Peace; she also had her own not-particularly-secret ending if you gave her enough money over the course of the game. 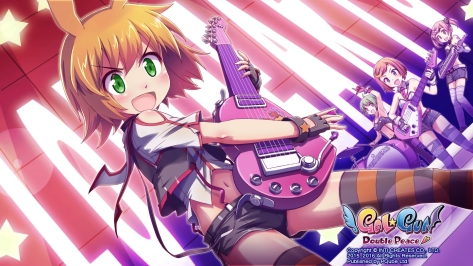 Madoka is the president of the light music club, but it seems at some point in Gal*Gun history, LOVE HEARTS beat the light music club in a battle of the bands, and Madoka was forced to join her rivals. Indeed, she can be seen in the background of Aoi’s ending image from Double Peace above, playing the bass — and she’s clearly having a great time.

As much as she protests, you see, she actually really enjoys performing with Aoi and the rest of the band… even if it did mean her changing her specialism from drums to bass guitar.

Continuing an apparent tradition of characters named Hibari being oddballs — see Senran Kagura for a particularly potent example — Hibari is… well, an oddball, in more ways than one. She looks particularly young for a third-year because she is young for a third-year — her strong intellect caused her to get shunted forward a couple of years, but this has left her in a somewhat awkward situation where she’s not entirely comfortable talking with people who should technically be her senpai.

She’s seemingly very popular for her deductive reasoning skills, which are apparently boosted through the consumption of canned crab meat, leading to her obtaining the nickname “Detective Crab Can”. She admits to the protagonist that she actually prefers canned mackerel, however, and also lets her guard down somewhat once the pair have become closer, reverting to a rather more immature way of speaking than one might expect from one of the top intellects in the school.

As for that name? Well, “Hibari” can be interpreted in a few ways, including “skylark”, but perhaps the most appropriate reading for both Hibari-chan here and the one in Senran Kagura is “cloud bird”, suggesting someone with their head in the clouds. Another mystery solved on behalf of Detective Crab Can!

Saori is one of those girls who is absolutely insistent that she wants nothing to do with anything “dirty”, but you just know she’s a total horndog underneath. At least I choose to believe that.

Actually, she’s rather conservative in her attitudes, and a little cynical about the kind of situations she’s aware people fantasise about. She also advocated for the abolition of gym bloomers, partly due to her own self-consciousness over her figure — particularly her breasts — but seemingly failed to get enough support to have her motion passed.

As standoffish as she is, once she softens up to the protagonist, she’s rather fun, considering him “cute” for staring mutely at her breasts (which I think we can surmise she’s secretly quite proud of, given how she mentions them unprompted) and seemingly quite comfortable around him despite getting a distinct “extra perverted” vibe from him. Could this be the beginning of a beautiful relationship?

Mirai is a proud character who is very much into her own looks — but in another example of Gal*Gun 2 subverting tropes that are typically combined together, she’s not an ohohoho-ing princess type at all, though her heavy use of the sentence-ending particle kashira in the Japanese audio suggests a keenness for her to emphasise her femininity. Likewise, at the other end of the spectrum, despite being the head of the tennis team, she doesn’t have any particularly tomboyish tendencies at all, once again subverting a common popular media trope.

One can surmise that Mirai is actually a little insecure, despite her apparent confidence, since she lost out on the top spot in the school’s beauty pageant two years in a row — last time to the statue of Kaoroku Sakurazaki that adorns the academy’s courtyard. Once she and the protagonist become closer, she seemingly seeks reassurance that she really is cute, and admits that it’s not often she spends time alone with a guy.

She also expresses concern that the protagonist is trying to “tame” her. Yeah, good luck with that… I feel this girl would be nothing if not high-maintenance! 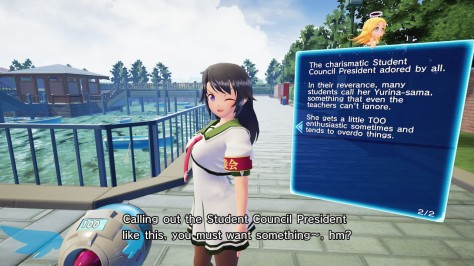 Finally for today, we come to Sakurazaki’s student council president — and once again, we’re confronted with a character who subverts expectations in that she doesn’t conform to the typically used kuudere or dandere tropes most commonly associated with this position. Instead, we have one of the most attractive, likeable members of the extended cast — appropriately enough described as a popular and charismatic girl who is “adored by all”.

Yurina is an enthusiastic girl with plenty of energy about her, but is clearly wise to people having ulterior motives for contacting her or treating her well. She doesn’t seem to mind the company of the protagonist at all, mind you — and even engages in teasing him somewhat once the pair become a little closer.

When you think about it, this sort of personality is what you really want from a student council president. Yurina comes across as someone who gets things done and manages to remain popular in the process — and her personality makes her highly approachable, perhaps to a fault.

So there you have it! Across the two articles we’ve spent exploring the extended cast, we’ve covered less than half of the characters in the game. Gal*Gun 2’s appeal comes as much from having the opportunity to spend some quality time with each and every one of these charming young women as it does from its solid first-person shooting gameplay — and it’s something I hope continues with the inevitable future installments.

For now, however, it’s time to bid a fond farewell to Sakurazaki Academy, take off our Pheromone Goggles and probably go have a cold shower or something. I have no doubt we’ll be back at some point in the future, though…