You know a console generation has truly reached maturity when it gets a compilation of Mega Drive games.

Sega’s library of 16-bit classics must surely, by now, be some of the most frequently officially and legally emulated games of all time — and yet we keep getting these packages. And people keep buying them. People like, yes, me.

So is this latest bundle of games worth picking up? Well, read on and find out — and over the course of the coming weeks, we’ll be looking at the individual games in the compilation in more detail, too, through the Mega Drive Essentials column.

These Mega Drive compilations have been farmed out to a number of different developers over the years, with some particular highlights being the Xbox 360 and PlayStation 3 packages by Backbone Entertainment, and the PSP bundle by Digital Eclipse. This latest collection is the work of d3t, whose previous work included the various separate Mega Drive releases on PC-based digital distribution platform Steam.

To be honest, the knowledge that d3t was working on this new collection concerned me slightly; while their Steam releases cover a wide range of different games and the addition of Steam Workshop mod support has allowed people to get creative with these classic games, the performance of the emulated games was, at times, questionable, depending on your computer hardware, and the whole thing was wrapped together in a somewhat unnecessary “virtual bedroom” interface that some actually attributed the poor performance to.

Thankfully, the new release of Sega Mega Drive Classics performs very well indeed for the most part — at least on the PS4 version I’ve been playing — despite having a lot in common with the Steam releases, including the virtual bedroom setup. Emulation is solid and smooth, though there are very occasional “micro freezes” now and then; these are infrequent and unobtrusive enough to not be a major issue, but it’s a shame they slipped in for whatever reason. Sound reproduction is very good, with the Mega Drive’s FM synthesis and crunchy samples sounding as great as ever, and even games that have struggled with authentic audio in some collections — Phantasy Star III is a good example — appear to sound as they should.

The emulation options available in Sega Mega Drive Classics are surprisingly in depth for a console release like this. They include four graphical rendering modes ranging from gloriously sharp pixels you could cut yourself on to various takes on smooth filtering, as well as a selection of optional borders to apply outside the main 4:3 screen area. You can apply scanlines and a simulation of screen curvature if you want to try and convince yourself you have a 55-inch widescreen CRT. You can disable simulation of the Mega Drive’s inherent sprite limitations, helping to reduce sprite flicker in some games — though breaking special effects in others that deliberately made use of this limitation to hide screen “layers” — and even flip all of the games into “Mirror Mode” to play them the other way around. It’s surprising quite how different some games feel going from right to left instead of left to right.

The games themselves are mostly how they always were back in the day, though in cases where regional variations exist you often have the option to switch between them — for example, you can switch the Streets of Rage series into being their Japanese Bare Knuckle counterparts, for example, or play Landstalker in one of several different languages. Where appropriate, games have also had online leaderboards added, and some even have special “challenges” to complete, tasking you with completing a particular objective in the game, often under adverse conditions of some description.

There’s also an online multiplayer system in which you can make yourself available for matchmaking and search for players while playing other games, with the game notifying you when someone is available to play and what they were hoping to compete in. At the time of writing, I’m yet to find an opponent, but the ability to invite friends makes it simple enough to set up more organised sessions rather than attempting to rely on the general public.

There are a number of quality of life features in this collection that help make playing some of these games a bit more practical — particularly those that had no save or password systems and expected you to complete them in a single sitting. (Fatal Labyrinth, I’m looking at you.) Firstly, there is a save state system with four slots for each game, as well as a quick save and quick load system mapped to the right analogue stick. You can, of course, use this for “cheating” if you wish, but it’s perhaps most useful for the aforementioned situation where you’re deep into one of these games but you really should get to bed/go to work/feed the cat or whatever and don’t want to lose your progress.

Perhaps the best quality of life features, though, are the “rewind” and “fast forward” buttons, mapped to the triggers, both accompanied by a pleasantly convincing VHS-style video effect. Rewinding allows you to go back and try something again that you messed up — cheating, in my book, though sometimes you just accidentally do something stupid — while fast forward simply lets the game continue to run — and be fully playable — while moving at a much higher than normal speed. It’s worth noting that you can’t rewind, correct a mistake then fast forward through the “recording” back to where you were; once you go back, you need to do the subsequent stuff again.

So that’s all the technical stuff, but perhaps the most important thing about this collection is that the games on offer are pretty consistently excellent. Sure, there are a few somewhat less-regarded games in there — Galaxy Force II and Super Thunder Blade spring to mind — but there are also a load of games that you don’t typically see in these collections, like the two ToeJam and Earl games, Landstalker and several Treasure games including Gunstar Heroes and Alien Soldier.

As a complete collection, this represents a wonderful cross-section of the Mega Drive era, although the unfortunate omission of Sonic the Hedgehog 3 and Sonic & Knuckles — presumably due to the ongoing rights issues over the music — is a little disappointing. It’s also a shame that it lacks the historical material, video interviews and unlockable arcade and Master System games of Backbone’s collection for 360 and PS3 — and the apparent lack of in-game manuals seems like a curious omission, though most of these games are intuitive and “arcadey” enough to pick up and play without too much difficulty. 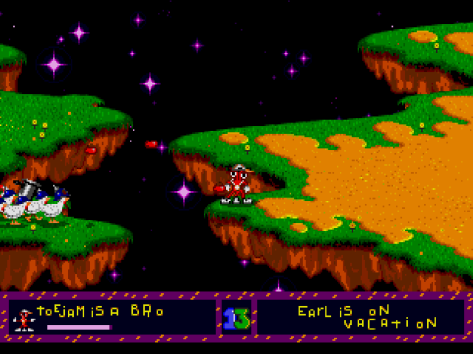 Don’t let these few flaws deter you; the really important thing here is the games library itself, and this is a great collection of games. While there is some overlap with the aforementioned earlier compilation packages on other platforms, there’s enough new and unique stuff here to warrant a purchase, particularly as it makes these games more accessible than ever, as well as making it child’s play to stream, record and take screenshots of them.

And for those young whipper-snappers out there who didn’t live through the 16-bit era… well, you’ve got one hell of a history lesson ahead of you. Study hard!