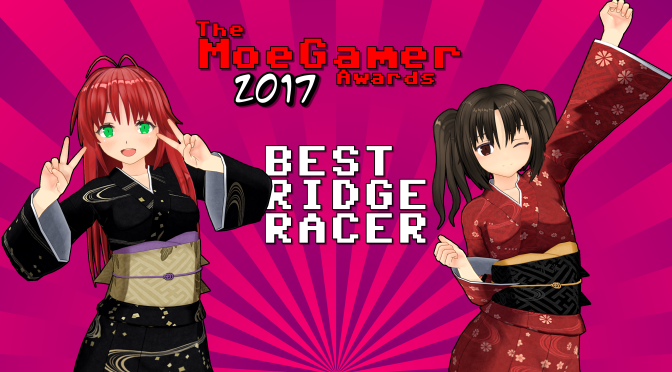 The Ridge Racer series was a prime candidate for the Uncancel This Series award, but I’m still holding out hope that we’ll get a new one someday, and that it will be the most amazing arcade racer in existence.

Until that time comes, there are plenty of games in the series that I can continue to enjoy. But that, of course, begs an important question: which one of them is best?

This was an easy choice — though going in to our month of Ridge Racer here on MoeGamer I wouldn’t have expected a PSP spinoff game from outside the main series to have become my favourite installment, since prior to that coverage I was a staunch supporter of Ridge Racer Type 4 as Best Ridge Racer.

Okay, so I’d never played Ridge Racer 6 or 7 or the two PSP games before that month of coverage, but come on. Ridge Racer Type 4 was — and still is — a fantastic game.

I actually wasn’t originally planning to include the two PSP games in the Ridge Racer Cover Game features at all, because they are, as previously noted, not part of the mainline series. However, a certain amount of urging from a few people whose opinions I tend to trust a great deal coupled with the fact I found extremely cheap copies of both complete with manuals and boxes meant that I picked them up. And a quiet evening saw me pick up my PSP and pop one in out of curiosity. Several hours later I knew I had to fit these in somewhere.

So why Ridge Racer 2 specifically? Well, simply because it’s almost the exact same game as Ridge Racer for PSP (literally, they didn’t even bother to change the intro or menu screens) but better. It is the same game with more tracks, different things to unlock, additional modes and more music.

It is a terrible, terrible sequel in that it is effectively a standalone expansion pack rather than an actual sequel in any way, shape or form, but taken on its own terms it is an absolutely magnificent arcade racing game, and a great way of enjoying all of Ridge Racer’s best bits. The only thing it’s missing are the newer tracks from Ridge Racer 6 and 7, despite it releasing at a similar time to the latter.

Why is it so good? Well, aside from the wealth of content on offer — encompassing pretty much every track seen in the series between the first and fifth installments, upgraded with pretty new visuals and mirror modes — it just handles beautifully. Adopting the drifting model introduced in Ridge Racer V on PS2, whereby simply steering around a corner without accelerating will slide your back end out, the whole thing provides a delightfully fluid experience that you always feel in complete control of.

The game runs beautifully smoothly, maintaining a slick 60 frames per second at pretty much all times, and considering the age and capabilities of the PSP hardware it’s still quite a looker, too. There are lovely lighting effects, weighty-looking car models, plenty of pieces of dynamic scenery to add some life to the courses, and the tracks are designed in such a way that there’s always something interesting to look at as well as useful landmarks to use as reference points to know what’s coming up next.

The Ridge Racer series has had some hefty ups and downs in terms of its soundtrack quality over the years, but both PSP incarnations — and particularly the second one that we’re primarily concerned with here — have some of the very best songs, complementing the excellent visuals and smooth, slick gameplay perfectly.

Not only is there a substantial selection of original songs composed specifically for these games, Ridge Racer 2 in particular also complements these with original sound versions from the older games as well as a selection of remixes. The latter is particularly noteworthy for making even the most unlistenable of the early games’ cacophonous techno music a much more enjoyable listening experience than I would have ever thought possible given the source material.

The excellent gameplay and audio-visual presentation combines with a sense that the whole game has simply been brilliantly designed not only as a satisfying video game in general terms, but as a particularly good example of how to do a handheld game correctly, too. Even the longest single races tend to take no more than seven or eight minutes to complete, and there’s even a mode where you tell the game how much free time you have to play and it will generate a custom series of races for you to fill that period.

While this may still lack the immediacy and “play for 30 seconds” nature of modern mobile phone games, it remains friendly to short play sessions without sacrificing any depth to the experience, and is flexible enough to accommodate those who want to sit down for a more protracted session of racing, too. (Also there are no microtransactions or in-app purchases, which these days are omissions to take great pleasure in.)

Put simply, Ridge Racer 2 on PSP is the very pinnacle of a very specific breed of arcade racer. It’s fast, it’s fun, it’s not the slightest bit realistic, and by God is it satisfying and enjoyable. It represents everything the Ridge Racer series has clearly wanted to achieve since its inception — to provide accessible, enjoyable arcade racing with enough immediacy for casual players to pick up and play but sufficient depth to keep the more dedicated invested in the long term — and it pulls all this off with an inimitable sense of style and its own identity.

Ridge Racer 2 for PSP is my favourite Ridge Racer, in no uncertain terms. Though, y’know, the rest of them are still pretty good, too…

More about the Ridge Racer series