The original Groove Coaster, which released on iOS in 2011, was a revelation. It was an accessible yet challenging rhythm game that made excellent use of its touchscreen control method — and which beautifully demonstrated how a completely abstract aesthetic can be just as thrilling and enjoyable as a detailed, realistic one.

While the series isn’t as well-known today as it was during the initial fever for it when it first appeared on the scene, it’s been quietly rumbling along for a decade at this point, taking in several sequels for both mobile phones and arcades, a Steam release for PC in 2018 and, towards the end of 2019, a special Switch version subtitled Wai Wai Party!!!!

At fifty quid, Groove Coaster Wai Wai Party!!!! may look a tad pricey for a downloadable game to the casual observer, and I must confess I’d put off checking it out for far longer than I should have because of this. But having been generously given some eShop credit as a leaving present from my old job, I figured it was high time I gave it a look for myself. So let’s explore it together!

For those who have never encountered Groove Coaster, the concept is pretty straightforward, and very similar to most other music games out there. While listening to a piece of music, you press buttons on your controller, tap a touchscreen or, in the case of the Switch version, use motion controls (don’t do this) to tap out rhythmic patterns to accompany the music. The more notes you hit in succession without messing up, the higher your score goes. The higher the difficulty you’re playing on, the more complex the rhythmic patterns are.

Groove Coaster’s big twist (no pun intended) and the basis of its name is that unlike many other music games, the musical “score” you’re following along doesn’t just move along in a straight line. No no no; in Groove Coaster, it dips and whirls and turns and spins and curls and wibbles and wobbles all over the place, giving you the distinct feeling that you’re going on a journey through the piece of music. The many ways in which Groove Coaster’s note line moves aren’t random, mind you; each and every song has its own carefully choreographed routine that is designed to complement both what you’re listening to, plus the abstract visuals that are accompanying the action in the background of the play area. 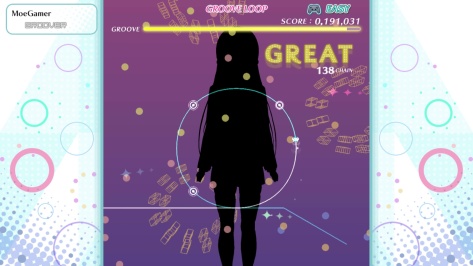 Groove Coaster also adds a few extra techniques to the mix depending on what difficulty you’re playing on. On the easier levels, you’ll just have to tap or hold a button, or occasionally press two buttons together for a “critical” hit. As you progress, though, you’ll also have to hammer buttons rapidly, press buttons that point in a specific direction (or flick an analogue stick) or sometimes hold a specific button or direction down for a set period.

The real Groove Coaster pros will find time amid all the marked notes in the songs to “ad-lib” a few extra notes here and there; each song includes several hidden ad-lib notes, and successfully hitting all of these plus delivering a flawless performance of the marked score nets you a “Perfect” rating; a flawless performance without the ad-libs, meanwhile, is merely a “No Miss” run of that song. Still worthy of bragging rights, for sure, but far from evidence of Groove Coaster mastery.

Like the very best music games — and typically those that are of Japanese origin, such as Sega’s excellent Hatsune Miku series or Namco’s Taiko no Tatsujin — there’s a strong feeling in Groove Coaster that you’re not just tapping out a beat and trying to stay in time, but rather you’re actually playing an instrument that forms part of the performance. This is perhaps less pronounced on the easiest difficulty level, where the note patterns you’ll encounter are pretty tame and very rarely delve into the terrifying world of syncopation, but from Normal upwards, you’ll start to get a very strong feeling that you’re “performing” the song rather than just trying to complete it.

Alongside this is the realisation that Groove Coaster is not a game about watching the screen and trying to hit the notes when you see them in the right place; it’s a game about listening to the music and hitting the buttons when you hear the right time to hit them. This is something that will come more naturally to some people than others — as a trained musician, it’s something I’m well familiar with, for example — but it’s an important lesson to learn if you ever want to advance beyond playing the easiest tracks on the lowest difficulty setting. (Not that there’s anything wrong with enjoying the game in that way, mind; at its easiest level, Groove Coaster can be looked upon as a potent and highly enjoyable means of engaging, interacting and experimenting with music and the multisensory ways in which we can perceive it.)

A big part of Groove Coaster Wai Wai Party!!!!’s appeal is its eclectic range of tracks. These cover original creations from Taito’s in-house sound team Zuntata, themes from popular anime ranging from the classic Neon Genesis Evangelion to more recent hits like Pop Team Epic and Kemono Friends, numerous Vocaloid tracks featuring Hatsune Miku and friends, a fine selection of Touhou remixes and even some songs from the popular VTubers Kizuna Ai and Mirai Akari. A decent selection is available right from booting up the game for the first time, and more can be unlocked by fulfilling the conditions for a variety of “Missions” as you play the game.

There are also several DLC packs available, which can expand the lineup of Touhou and Vocaloid tracks available as well as adding more original Zuntata creations, songs from real-world Japanese idol group Dempagumi Inc., tracks from the video games Undertale and Muse Dash. Each pack also comes with a number of customisation features for the game including avatars and “navigator” characters to direct you through the game menus — Hololive fans will be pleased to note that a number of additional famous VTubers put in an appearance in several of the DLC packs.

It’s a great game, but that price is likely to put a lot of people off. Fifty big ones is a lot to pay for a downloadable game these days, and if you buy all the DLC available as I type this you’ll have spent over two hundred quid in total. But the thing to bear in mind in the case of music games is that those eclectic track lists come at a price; the soundtrack in Groove Coaster Wai Wai Party!!!! comes from an incredible range of sources that must have been an absolute licensing nightmare for Taito to sort out. You are, in essence, paying for the licenses to a whole bunch of music to enjoy; would you rather they took the Bombergirl model and charged you per play? 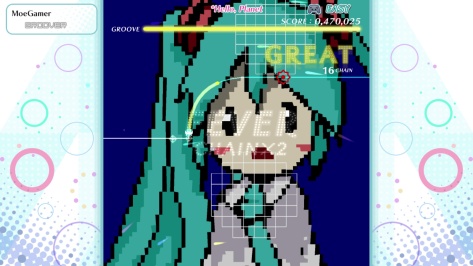 If you’re still baulking at it, look at it this way: you’d have paid somewhere in the region of £40 for a copy of Guitar Hero, Rock Band or Britney’s Dance Beat (probably just me on that last one) without batting an eyelid a couple of console generations ago, and the situation was exactly the same; you were paying for the music licenses as much as the game itself.

No, you don’t have a packaged copy to put on your shelf with Groove Coaster Wai Wai Party!!!! — but given that the game is designed to be used as a platform to add new tracks to over time (rather than paying that £200 all in one go) it makes a certain amount of sense to keep it as a digital title. Would it be nice to see a “Complete” release on cart one day? Sure. I don’t see it happening, unfortunately, but we can dream!

For those willing to grit their teeth and make that initial outlay, Groove Coaster Wai Wai Party!!!! is one of the best music games in years, and sure to keep you busy for a long time to come — with only part of that time being taken up by the absolutely astronomical load time that inexplicably occurs the first time you boot it up. (Subsequent startups, thankfully, are a bit quicker!)

It’s a game that’s accessible and friendly to rhythm game newbies but which provides a substantial challenge to rhythm game maestros — and while on some level I miss the good old days of plastic instruments, it’s much more convenient to be able to sit my Switch controller down on a tabletop and play it like a piano rather than faffing around with a full Rock Band setup. 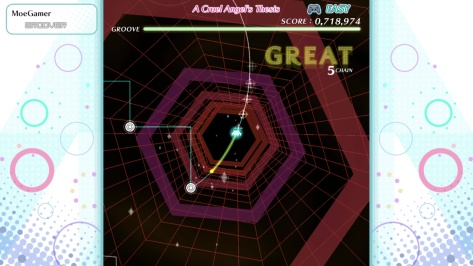 Plus you get to play along with Kizuna Ai singing AIAIAI, which frankly is worth the price of admission by itself so far as I’m concerned. Your mileage, as ever, may vary.

3 thoughts on “Groove Coaster Wai Wai Party!!!!: Rockin’ Out With the VTubers and Vocaloids”