Yars’ Revenge is, it’s fair to say, one of the most well-known and respected Atari 2600 games out there.

Indeed, back in the day it was one of the platform’s best-selling games, being one of several examples from the 1981-1982 period that actually broke a million copies sold. This was, as you might imagine, a pretty big deal back in the early days of video gaming.

It’s enjoyed enduring popularity over the years for good reason. So with it being part of the Atari Collection 2 cartridge for the Evercade retro gaming system, let’s take a closer look at what it’s all about.

Yars’ Revenge was originally intended to be an Atari 2600 port of Cinematronics’ 1980 vector graphics arcade game Star Castle, beloved of Vectrex owners everywhere. The objective of Star Castle is to blow up an enemy that is protected by three rotating energy rings; in order to succeed, you have to blast your way through the three layers of protection and your opponent itself, all the while under fire from homing mines and the enemy’s powerful cannon.

At some point during development, creator Howard Scott Warshaw realised that the Atari 2600’s technology wasn’t quite up to the task of creating a fully accurate port of Star Castle — or, at least, the ability programmers had to leverage that technology wasn’t up to that standard in the early ’80s, anyway. Speaking at GDC in 2015, Warshaw recalled that he decided to adapt the original concept while preserving the “top logical and geometric components of Star Castle” and “reorganise [those concepts] in a way that would better suit [the Atari 2600]”. The result was a game that is true to Star Castle’s basic formula, but rather different in execution.

Yars’ Revenge was an early title to make a noticeable effort with narrative — albeit not within the game itself due to the limitations of the technology at the time. Instead, the game shipped with a comic book written by Hope Shafer and illustrated by Frank Cirocco, Ray Garst and Hiro Kimura; this told the story of the insect-like Yars, who are descended from Earth’s common house fly. It seems during Earth’s first interstellar colonisation efforts, a number of flies were accidentally brought on board with the ship’s food supplies, and ended up being the only survivors after the ship crash-landed on a planet in the Razak solar system. As these things tend to go, the radiation from the crashed spaceship ended up mutating the flies into the Yars, and the rest is history.

Warshaw contributed to the overall lore of Yars’ Revenge, too; being someone who was rather fond of sneaking hidden messages into things, he deliberately named both the Yars and their new home in the Razak solar system after Atari’s CEO at the time, Ray Kassar — albeit reversing and tweaking the spelling slightly to make it less obvious. Warshaw was also dead set on the game being called Yars’ Revenge rather than the more generic-sounding names Atari’s marketing department tended to come up with for games in the early ’80s, and managed to manipulate the situation to his advantage by lying to a marketing department employee that Kassar had already approved the name. Swearing him to secrecy, Warshaw knew full well that he would go right back and blab the “secret” to everyone, and thus the name stuck — entirely due to a creator having a clear vision for his work rather than wanting to hand it over to the Men In Suits. Respect.

In Yars’ Revenge, you, playing the role of one of the insect-like Yars, are challenged with destroying a never-ending string of bases that belong to the Qotile aggressors, who attacked the peaceful Yars without warning. As the game begins, the Qotile have already destroyed one of the Yars’ home planets in the Razak system, creating a radioactive “Neutral Zone” between the surviving Yars and the Qotile’s bases on a nearby moon. Keen to avenge the destruction of one of their colonies, the Yars hatch a plan to defeat the Qotile making use of their unfinished weapon, the Zorlon Cannon. But first, the brave Yars on the front lines must clear a path for the Cannon’s shells through the energy shields the Qotile have erected around their bases.

In practice, this means that you move a little bug around on the screen and have to shoot your way through a bunch of red blocks in order to reach the enemy base, which is moving up and down on the right-hand side of the screen. Once you’ve gained access to the Qotile’s base, touching it primes the Zorlon Cannon for launch. But because the Cannon is unfinished, it has no targeting system and instead has to fire directly at the Yar calling in the Cannon strike. In other words, once the Cannon fires, the Yar will want to get out of the way sharpish, lest he end up in a similar state to one of his unfortunate ancestors who had a physical altercation with a car windscreen at high velocity.

As you progress through the game, there are little twists on the formula. The Qotile alternate between defending their base with a static, arc-shaped shield and a seemingly solid block that is constantly shifting. The latter can be especially tricky to deal with since you can’t just shoot a straight path through it; any holes you make will continuously move and cycle around the length of the wall, meaning for the most reliable results you’ll probably want to destroy most or all of it.

The Qotile aren’t defenceless, either. The Yar’s position is constantly tracked by an indestructible flashing marker known as a Destroyer Missile, meaning it’s impossible to remain in one place for too long. On top of that, every so often the Qotile base will fire a high-speed shot known as a Swirl directly at the Yar’s current position; anticipating this is key to high scores and continued play, since you score an extra life for hitting the Swirl in mid-flight with the Zorlon Cannon.

Initially, Yars’ Revenge might seem rather random — a theory that the chaotic, deliberately “glitched”-looking Neutral Zone on the screen would seem to back up, along with the “explosion” that occurs when you finish a level looking like some sort of catastrophic hardware failure. But step back a little and carefully observe what is going on, and you’ll see that there are clear patterns to everything.

There’s a distinct rhythm to how the Qotile base moves up and down which varies from level to level and determines how much you need to “lead” your shots with the Zorlon Cannon. And, more importantly, you can predict when a Swirl is about to launch by carefully watching the shifting colours of the Qotile base — the launch always occurs with the same orangey-red colour, which immediately follows white and yellow pulses. As the game progresses, you get less of a grace period between the Swirl preparing to launch and it coming right for you, though, so you still need to keep on your toes. 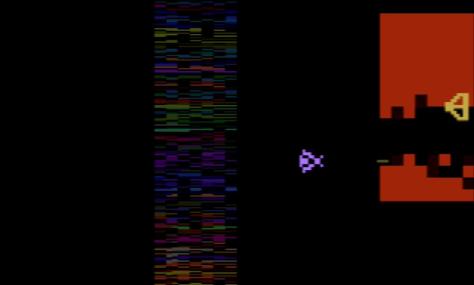 Interestingly, Yars’ Revenge had a fairly mediocre reception from certain quarters of the press at the time of its original release, with the October 1982 issue of Electronic Games criticising the game’s focus on repetition of the same mechanics at gradually escalating levels of difficulty; the reviewer in question believed that there were more interesting, varied contemporaries available at the time and felt that Yars’ Revenge was “far too static”. The same publication also referred to the game as a “video sleeping pill” in another article a year later.

Neither of these less-than-rave reviews dulled the appeal of Yars’ Revenge with the masses, however; the game went on to become one of the Atari 2600’s best-selling games that was not based on an existing license. Not only that, it went multimedia, too — as with Missile Command, Atari worked with Kid Stuff Records to release an album on vinyl featuring songs, music and dramatic performances based on the Yars’ backstory as told in the pack-in comic. It is just as deliciously awful as the Missile Command one.

Yars’ Revenge may look — and initially feel — very simplistic compared to more modern games. But that simplicity works in its favour; it’s the very definition of an easy to understand, hard to master game, particularly with how the difficulty ramps up with each passing level. Once you get a feel for the game’s distinctive rhythm and how to clear levels with the best possible scores, there’s an undeniably addictive quality to it that will keep you busy for quite some time — and yet the mechanics themselves are simple enough that anyone can pick it up and start playing almost immediately.

It’s an all-time classic with good reason, in other words — and a dangerous thing to have easy access to in your pocket if you wanted to get anything done!

One thought on “Yars’ Revenge: This Game Has Bugs”