Every self-respecting princess needs a good maid to tend to her needs — even when the princess in question is as determined to do things her own way as Merurulince Rede Arls is.

In such situations, it pays for the maid in question to have a longstanding relationship with the princess in question, as that means the princess might actually listen to the maid at those times when she finds herself frustrated enough to accidentally call a parent a “poopyhead” to their face.

Keina knows how to handle Meruru, in other words. And witnessing their relationship with one another is one of the most heartwarming parts of Atelier Meruru: The Apprentice of Arland.

In the early hours of Atelier Meruru, we’re introduced to Meruru herself, as well as two people from around the castle that she grew up with: Lias the guard, who constantly lives in the shadow of his brother Rufus the butler, and Keina the maid. It’s clear there’s a tight bond between the three of them, but especially between Keina and Meruru.

While she and Keina enjoy very different social standings, Meruru has never been one to particularly stand on formality or take advantage of her royal position. Consequently, she has always regarded Keina as someone she is very close to rather than her “servant”. Yes, Keina does things for Meruru, but it doesn’t take long to figure out that she’s perfectly happy with her situation; she enjoys performing her duties, and seems to regard them as taking care of Meruru in an almost familial sense rather than simply doing her job.

Meruru, meanwhile, always seems to genuinely appreciate what Keina does, and treats her as a close friend — perhaps even a sister. Or perhaps there’s even an argument to be made that she regards her relationship with Keina as something even closer than that; there are numerous implications throughout the main narrative and Keina’s specific side stories that suggest she and Meruru have enjoyed intimate moments together at various points in their lives. Nothing specifically pointed out as romantic or sexual, I might add — but things like taking baths together and, in one memorable scene towards the end of Keina’s chain of events, swapping clothes with one another. 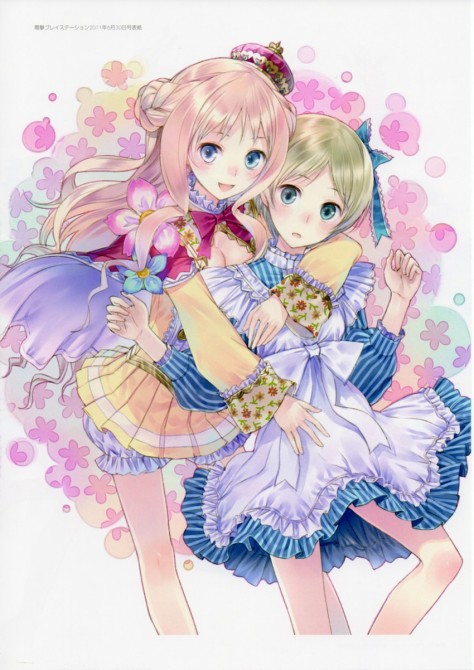 It’s clear from how Meruru interacts with other people — particularly Totori and Mimi — that she’s a thoroughly modern sort of girl and absolutely does not have a problem with same-sex relationships being a thing. Indeed, one might argue she even seems particularly open to the idea with Keina, though a certain amount is left up to interpretation. Conversely, however, Keina has clearly been brought up in a fairly “traditional” way, and as such, despite having very obviously carried a huge, flaming torch for Meruru for many, many years by the time we join the story, is far too embarrassed to ever acknowledge something so embarrassing, particularly if anyone else ever calls her out on it.

Keina is pretty easily flustered throughout Atelier Meruru, not helped by the fact that the people around her seem to enjoy teasing her. At no point does this cross a line into becoming mean, however; everyone regards Keina’s embarrassed face as being cute so it’s always in good fun — there’s the distinct impression that if Keina really had a problem with it, she’d actually speak up and ask, very politely, if people wouldn’t mind stopping that. But she doesn’t.

In fact, Keina is widely beloved around the town of Arls almost as much as Meruru herself is. Whenever we see her walking around the town on a shopping trip, people always have a kind word to say to her or something to give her, and she’s the sort of person who likely knows everyone around the town by name. At least in the early hours of the game, anyway; by the latter hours of Atelier Meruru, when the population of Arls is pushing a hundred thousand people, perhaps she doesn’t know everyone quite as much as she used to!

Even with Arls’ rapid growth under Meruru, Keina remains committed to doing the best she can and being the nicest person she possibly can be. And this is taken to its natural extension by the time Atelier Lulua: The Scion of Arland rolls around, at which time we come across a mature Keina enjoying a position of importance in Arls’ local government. By this time, she has blossomed into a beautiful young woman who seems a lot calmer and willing to stand up for herself than the Keina we see in Atelier Meruru; that said, there’s also ample evidence that the flightiness of a fully armed and operational adult Meruru can still get her rather flustered despite her best intentions. It’s a nice touch that keeps her feeling very “human” rather than being some sort of paragon of unattainable perfection, which she could easily have been depicted as.

That said, Keina does have one particularly mysterious aspect about her, which is the fact that she seems to bring good luck to those around her, wherever she goes. This is in stark contrast to her fellow childhood friend Lias, who appears to suffer some sort of misfortune on a shockingly regular basis. These two extremes of apparent happenstance are reflected in the two characters’ personalities, likely subconsciously; Lias has become somewhat embittered and cynical — not helped by his inferiority complex — while Keina has become the polite, positive, helpful and beloved young woman all of Arls is happy to see any time she is seen out and about.

But which came first? The good fortune, or the pleasant personality? Hard to say… probably best to be kind to others, though, just in case, eh?