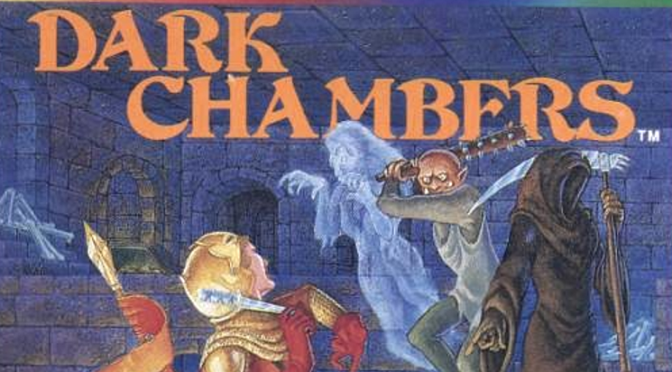 The history of how a lot of old games came to be is deeply fascinating.

One such tale that I’ve found rather interesting is how Atari’s Dark Chambers found its way to release. This is a game that has its roots in John Palevich’s Dandy, which is the reason the all-time classic cooperative top-down dungeon crawler Gauntlet exists, but then there’s also several versions of Dark Chambers out there to enjoy, too.

The Evercade retro gaming handheld allows us to experience the Atari 2600 version for ourselves as part of its Atari Collection 2 cartridge. So let’s take a closer look!

First up, that history. John Palevich originally released Dandy through the Atari Program Exchange, or APX, in 1983. APX was a mail-order programme where Atari would accept submissions from independent programmers, then distribute them while allowing the original authors to retain all rights to them. Atari would then pay the original creators royalties according to the sales via APX. It was a system that worked quite well for Atari for a while, and was the original home of many all-time classics, including strategic wargame Eastern Front; one of the first ever vertically scrolling shoot ’em ups, Caverns of Mars; and, of course, Dandy.

Palevich originally conceived Dandy as a means of helping him run Dungeons & Dragons campaigns at MIT. The original intention was to have five networked Atari 8-bit computers — four for players, one for a dungeon master — and facilitate some rather merry and action-packed computer-assisted role-playing. The original vision never quite came to fruition, but Palevich did manage to have the dungeon master computer serving maps to four other players — and he later adapted a single-machine variant of the game for up to four players to enjoy its combination of maze exploration and shooting action on a single screen. This was the version of Dandy that was released through APX.

In 1985, Ed Logg released Gauntlet to the arcades, drawing clear inspiration from Dandy’s distinctive combination of top-down exploration and shoot ’em up-inspired combat, but failing to credit Palevich’s original creation. Palevich ended up suing Logg over the blatant similarities between the games, but supposedly settled out of court. Rumour has it that he received a free Gauntlet machine as part of the settlement, which would have probably been enough to stop anyone complaining in 1985.

Three years later in 1988, veteran Atari programmers Sculptured Software returned to Palevich’s original project, remixed and enhanced it quite considerably, then published it through Atari as Dark Chambers for Atari 2600, Atari 7800 and the 65XE-based Atari XE Games System, or XEGS. This time around, Palevich’s original copyright got a proper credit in the small print at the end of the manual — though given the huge facelift Dark Chambers is over Dandy on the 7800 and XEGS (less so on the understandably plain-looking 2600 version), you’d be forgiven for not immediately making the connection.

That connection is definitely there, though, and can mostly be seen in the distinctive way that combat with monsters is handled. The slobbering beasties attempting to get in your way while you proceed on your quest from level A to level Z mostly spawn from skull and crossbone-shaped generators that can be destroyed, but rather than each monster being a completely independent entity with its own characteristics as in Gauntlet, both Dandy and Dark Chambers instead make use of a “tier” system.

What this means is that there’s a progression of monsters. Zombies are the weakest, then wraiths, then skeletons, then wizards, and finally grim reapers are the strongest. Stronger monsters are worth more points when you defeat them, but they also do more damage to you if they hit you. The twist is that if you defeat a stronger monster, it doesn’t disappear; it simply becomes the next monster down in the list. In other words, deal enough damage to a grim reaper and it becomes a wizard, and so on all the way down to zombies; blasting a zombie to pieces is the only way to give a monster a true and final death.

This provides a slightly more interesting twist on the formula than just making stronger monsters require more hits to defeat. By using this system, you can effectively “weaken” a monster without defeating it if you’re, say, in a confined space and don’t think you’ll be able to dispatch it completely before it reaches you. This way, you can minimise the damage to yourself and then get out of the sticky situation as best you can.

Aside from battle, your main job in Dark Chambers is, as previously mentioned, to make your way from level A to level Z, scoring as many points as possible along the way. You can simply make a beeline for the exit of each level — depicted as a descending staircase, but referred to as a “gate” in the manual — if you want to, but this will naturally mean you will score fewer points; the exit is also frequently hidden beneath a monster generator, so in most cases you’ll have to do at least some exploration to progress.

Exploring is worthwhile, though. Besides the point-scoring treasure, which comes in several forms, there are also three upgrade items you can find in the dungeons. A gun allows you to shoot more quickly; a sword considerably increases the damage you do with each shot; and a shield decreases the damage you take from enemies. If nothing else, it’s worth seeking these out in your first few levels, as they’ll set you up nicely for the rest of the game and make life quite a bit easier.

Along the way, you’ll have to contend with traps in the form of black crosses on the floor and poisoned potions, which likewise have a cross on them to distinguish them from health-restoring potions. These might initially seem laughably obvious when you first see them, but occasionally they’re positioned extremely inconveniently — in a doorway, for example — meaning you’ll need to think very carefully about whether you really need to go that way.

You’ll also come across locked doors, which naturally require a key to open. You are free to stock up on keys if the exit isn’t behind a locked door — and of course there’s no guarantee that whatever is behind those locked doors is worth making the effort to investigate anyway. It’s the risk any adventurer takes.

The 2600 version of Dark Chambers is by far the weakest — the best is definitely the speedy, slick and colourful 7800 edition — but it’s still surprisingly compelling if you allow yourself to get wrapped up in the exploration side of things in particular. The levels are often surprisingly fiendishly designed, making clever use of wrap-around to confuse and disorient, and the seemingly slow-moving enemies can make formidable opponents in confined spaces.

Dark Chambers for 2600 is perhaps best looked at as an interesting evolution of the top-down adventure game formula on the platform: Adventure began it all with its focus on exploration (and running like buggery from duck-shaped dragons) around a fixed map, then Haunted House added some intriguing interactivity such as stumbling around in total darkness, and here Dark Chambers adds a lot more levels that are each pretty sprawling in their own right, and that all feel much more like you need to “solve” them in order to progress.

So, not the best version of Dark Chambers there is out there — but definitely worth spending some time with, for sure. Here’s hoping we see that lovely 7800 version on a subsequent Atari Collection cartridge for Evercade!

3 thoughts on “Dark Chambers: What a Dandy Dungeon This Is”