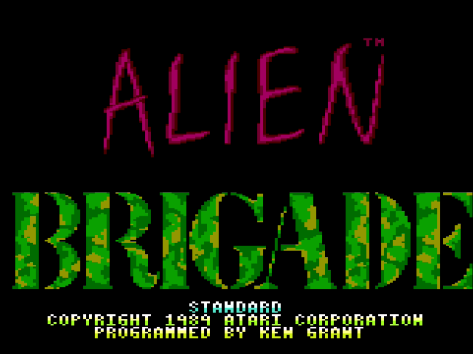 In Alien Brigade, you take control of a soldier that has been tasked with investigating some strange behaviour that has been exhibited by some of your comrades recently. Wouldn’t you know it? They’ve all been possessed by mind-controlling aliens with the intent of enslaving the entire human race, so it’s up to you (and your squad of buddies, who act as extra lives) to mow down everything that smells the slightest bit like it might bleed green while attempting to fulfil the specific objectives in five different missions.

Rather than going all-out with the horror aspect, Alien Brigade instead opts for a somewhat satirical, comedic angle on this premise. In particular, the setup for the game in the original Atari 7800 manual features some surprisingly biting commentary on society becoming increasingly self-absorbed and thus probably not even noticing if the people around them were possessed by aliens — not the sort of acerbic tone I’m typically used to seeing from the usually rather wholesome Atari of this era, but not altogether unwelcome!

The satirical, comedic angle carries across into the game itself, too. Optional dialogue sequences that precede each of the game’s five levels depict your soldier character as almost wilfully stupid and unable to think for himself, while the sarcastic wordplay your commanding officer lashes you with upon mission failure (“try executing your mission instead of civilians!”) depicts the military as being rather more concerned with the successful completion of a strategic objective than the actual value of individual human lives. All this is noteworthy not only because of its tone, but because dialogue sequences were pretty rare to see in Atari games, full stop.

The game is full of visual gags and absurdity, too. The first level, set in a military camp surrounded by jungle, initially appears to be a direct homage to Taito’s 1987 classic Operation Wolf, but it doesn’t take long for the expected machine gun-toting soldiers to be juxtaposed with slobbering green aliens that stagger across the background before attacking you with gleeful expressions on their toothy faces.

It only gets more ridiculous as you progress, too. The second level is set in a South American vacation resort and requires you to blast through aliens and possessed humans while panthers run wild across the background, bikini-clad holidaymakers panic outside their riverside accommodation, and the local water ski school appears to be doing a roaring trade. Just to throw you off your game a bit, occasionally you’ll spot an alien delightedly water-skiing past your point of view — rather wonderfully, the game paces this in such a way that it’s visible for such a short time you find yourself wondering if you really saw what you think you just saw.

Like most first-person rail shooters of the era, Alien Brigade isn’t a long game. Completing its five levels will take you about 25 minutes or so, and for most players this will easily be achieved on the lowest Novice difficulty, though the Standard, Advanced and Expert modes each ramp up the challenge with more enemies moving more quickly and fewer opportunities to heal your wounds; in exchange, however, the greater density of enemies means higher possible scores.

Graphically, the game is a good example of what the Atari 7800 is capable of. While the colour palette is fairly garish — deliberately so, I imagine, as this would be in keeping with the “B-Movie” feel of the game as a whole — there’s plenty of detail, the animation of the characters is very good and there are some impressively large sprites being thrown around. Of particular note are the death animations, which are often quite responsive to how you dispatch your enemies; you can often shoot the hats off soldiers in the foreground, for example, while the more obviously alien foes you come up against splatter satisfyingly into gooey chunks when you blow them away.

Despite supporting the 7800-compatible Atari XEGS light gun — obviously not an option for those playing on Evercade — it’s clear that Alien Brigade was designed from the outset to be perfectly playable using a controller. Movement of your aiming sight is responsive and snappy without being so fast you can’t aim exactly where you want, and the actual hit detection is forgiving enough that you don’t have to be completely precise in order to score a successful hit on your enemies.

Be wary, though; this forgiving hit detection also means that it’s quite easy to accidentally hit an innocent target when attempting to deal with a nearby enemy — and killing innocents not only causes you to lose points, it can also make you fail the mission completely if you do it too much!

Sound-wise, the game is pretty good, all things considered. For those less familiar with the Atari 7800, the system was a strange old beast in that its custom “MARIA” chip featured graphical capabilities well beyond those of its predecessors in Atari’s gaming console lineup, but partly to maintain backwards compatibility with the 2600, the 7800 relegated sound to the same TIA chip that the 2600 had used since 1977. TIA offers a mighty two channels of farts and beeps and is a legendary weak point of the 7800, though some developers were able to make it sing.

While I’d hesitate to say that Alien Brigade totally qualifies for that descriptor, it does make good use of sound, with clear audible cues for most events in the game helping you to understand what’s going on by listening as well as looking. Some atmosphere, tension and pace is added to the gameplay through the use of a constant, looping but unobtrusive military-style drum beat, and this beat also forms the basis of the short musical themes heard on the title screen and during the dialogue sequences, giving the whole thing a nicely consistent audible aesthetic that fits well with the visuals.

Alien Brigade is an enjoyable game that is simple to understand and a respectable challenge on its higher difficulty levels. There’s not a ton of variation to it so its longevity is perhaps questionable, but its overall design and solid aesthetics make it an enjoyable, satisfying pick-up-and-play blaster that is good for letting off a bit of steam with now and then. This is a game that you play purely for fun rather than to try and “master” — and that makes it an ideal fit for playing on the go on your Evercade.