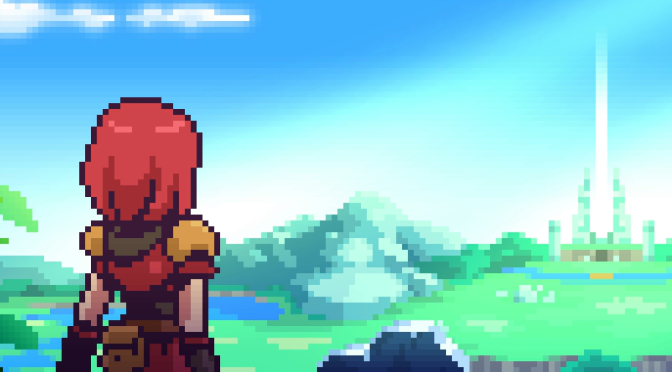 After the first Fairune successfully proved that you can make something that looks convincingly like an action RPG into a two-hour puzzle adventure, the natural next step for creator Yuumi “Skipmore” Kimura was to go bigger.

With that in mind, Fairune 2 is a considerably expanded affair over its predecessor, but maintains the same compelling, enjoyable and oddly relaxing blend of light action RPG elements, item-based puzzle solving and mind-bending navigation brainteasers.

If you’re coming straight from the first one, it might not subvert quite as many expectations as that one did — in that it’s a lot more of “the same” — but it is similarly delightful, and a pleasure to explore. Let’s take a closer look.

In Fairune 2, you once again take on the role of the nameless female protagonist — sometimes referred to as “Hope Girl” —  who, much like in her previous adventure, starts out completely unarmed and clad in a dress rather than armour.

While in your dress, you are completely safe — even monsters won’t attack a girl in a dress, according to the in-game encyclopaedia — and so you’re set free to explore the game’s first world. Indeed, there’s even an achievement available for reaching the first major objective without locating a weapon. Track down that weapon, though, and the game proper begins, unfolding similarly to the original Fairune. 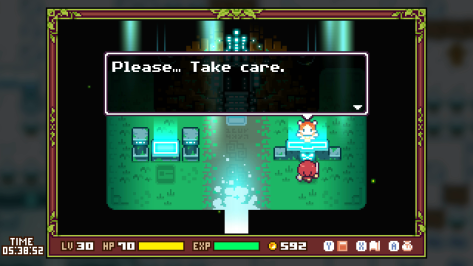 Combat is once again a simple matter of walking into an enemy, with the amount of damage you take relating to the difference in level between you and your foe. There are a couple of tweaks to the formula here, though; most notably, this time around if you take down enemies that are higher level than you but not enough to kill you, you’ll actually earn more experience points as well as taking additional damage. With that in mind, it can be worth your while to seek out riskier enemies for faster level-ups. More levels means more attack power and greater maximum hit points.

All sounds pretty simple so far, I imagine. And it is. But, as before, combat is emphatically not what Fairune 2 is about. The game’s challenge and complexity comes from the devious design of its environments and maps — and the fact that there’s now more than one world to explore. Specifically, there are four of them, each roughly the size of the original game in its entirety, and each of which consists of both an overworld and an underground section.

Fairune 2, even more so than its predecessor, is a game about being perceptive and observant. You’ll be able to navigate a significant portion of the map just by exploring places you haven’t been yet — the helpful automap facility, which can be moved to either of the top screen corners according to your preference, is a big help here — but in order to see everything the game has to offer, you’ll need to look out for what other games might call “secrets”… except here, they’re critical to success.

This can be a little frustrating at times, particularly when you know there’s just one critical item you need to get and you have no idea where the bloody hell it is — or indeed which of the four worlds it’s in. But it always makes logical sense; the overworld and underground regions connect directly to one another, so if you descend a set of stairs on one grid square you’ll be in that same place in the underground map, and thus you can make some logical deductions about where you might need to search.

Once you narrow that down, you’ll soon learn what you need to look out for: subtle environmental details. Does that path look like it’s leading nowhere? Try following it off the edge of the platform. Is there some strange-looking disturbed dirt by the side of a wall? That’s probably actually a hidden door. Does that pillar look like it has a few pixels out of place? Try walking behind it; there’s probably something there. 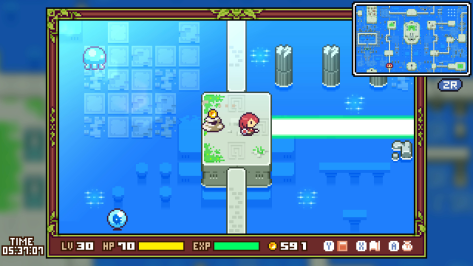 The first couple of times that you run into Fairune 2’s environmental trolling — and it absolutely is trolling, make no mistake about that — you may well be angry at the game. It might seem unfair to expect you to spot a few pixels out of place here and there — but slowly but surely as the game progresses, it gradually teaches you its distinct visual language and the techniques it uses to trick you.

As you continue your adventure, you’ll naturally develop your confidence and curiosity — the latter in particular is always rewarded, and sometimes not how you might expect. Some of my favourite sequences in the game involve spelling numerical codes or words out on the automap, and coming to the realisation of what you’ve just revealed really drives home how clever the world design in this game is. 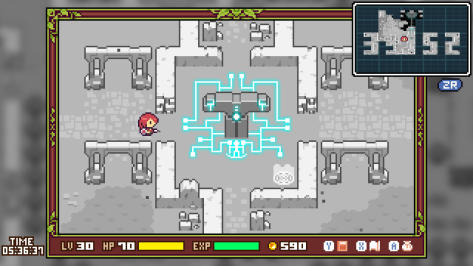 Much like the original Fairune, Fairune 2 is fond of teasing you with areas that you can see but can’t reach, and a significant part of the game consists of finding increasingly elaborate routes to things that are “over there”. Sometimes you’ll need to make use of items to make progress, but rather wisely Kimura elected to make the item-based puzzles very straightforward in this installment. The only times you’ll find yourself stumped in the game will be when you’re not sure how to get somewhere; once you’re actually there, it’s always pretty obvious what you need to do.

The other main difference in Fairune 2 is that it’s a little more narrative-heavy. This is relatively speaking, mind; the first Fairune had practically no dialogue whatsoever, and this only has a little. It’s enough to give us some interesting insight into these strange worlds we’re exploring, though — and, more importantly, why. Kimura stops short of giving us any completely concrete answers, however; there’s a pleasing amount of ambiguity about the whole setting and what just transpired even after the credits roll, and a lot is left up to the player’s interpretation. It’s not so vague as to be obtuse, but it also respects the player’s intelligence by not spelling everything out completely. A winning combination, so far as I’m concerned. 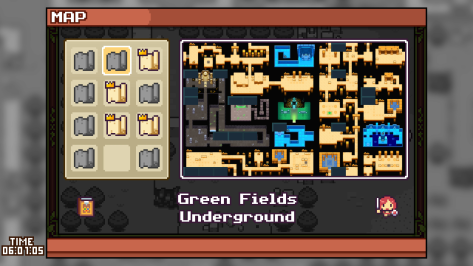 Fairune 2 is a great follow-up to its predecessor. It might not be quite as bite-sized as the original, but at about seven to eight hours for a first clear — you can supposedly speedrun it in three, if the achievements are to be believed — it’s still a game that is friendly to the busy wannabe adventurer who wants the satisfaction of a grand quest without the time commitment more conventional RPGs require.

4 thoughts on “Fairune 2: It’s Exactly What It Looks Like”