Ah, the 1980s; a period of shameless attempts to replicate and exceed the success of other people by having a go at doing it yourself.

Well, that was the thinking that drove Sega to create Flicky in 1984, anyway; jealous of Namco’s success with Mappy, the company’s leadership tasked designer Yoji Ishii with creating something that would beat their rival’s game.

Did they succeed? Well, that’s a matter of opinion. Just maybe bring the earplugs if you want to judge for yourself.

Flicky — and Mappy, for that matter — was born from the “dot eater” craze of the early ’80s that was sparked by Namco’s Pac-Man. The original design for Flicky simply involved the player catching dots in a maze, but Ishii and his collaborator, artist Yoshiki Kawasaki, decided to infuse the game with a bit more personality. Technology had moved on to a sufficient degree that arcade games no longer needed to be abstract affairs defined primarily by their mechanics; now they could have real character about them, too.

Kawasaki took inspiration from a Japanese song called デンセンマンの電線音頭 (Densenman no densen ondo) which is a song about sparrows sitting on electric wires that was popular on Japanese television in the 1970s. He decided to make the main character of the game a sparrow, and the “maze” would consist of electrical wires. However, after finding this theme a little too constraining, he subsequently decided to situate the game in an apartment block instead, running with the theme of protecting children from the outside world and taking them home safely.

In Flicky, you take on the role of Flicky, a blue sparrow with a simple goal: rescue all the yellow chicks known as “Chirps” (or piyopiyos in the Japanese original) and get them safely to the exit. Attempting to stop Flicky are a number of ginger cats and, later, some iguanas, natural enemy of the sparrow.

The eponymous heroine of the game is not, according to the official lore, the mother of the young Chirps she is tasked with rescuing. Rather, she is simply their “friend”, according to an interview with Kawasaki published by Sega in 2002 — though he also notes that “if the person who is playing thinks that Flicky is a mother bird, that’s fine”, so go with your headcanon, I guess.

Flicky’s gameplay differs from your average “dot-eater” of the time in that just collecting the “dots” is not the end of it. Rather, collecting one of the Chirps causes it to start following Flicky in a trail (rather like the goat kids in GoatUp, it now occurs to me) until it either collides with a cat, at which point it will start wandering aimlessly until Flicky grabs it again, or until Flicky takes it to the exit, at which point the player scores points.

As with most arcade games of the era, you score more points for doing things in rapid succession, so rescuing all the Chirps in the level in a single “train” scores you a lot more points than taking them to the exit one at a time.

The cats can either be avoided by jumping over them using Flicky’s rather floaty jump, or they can be temporarily defeated by throwing objects at them. This is achieved by running into an object to collect it, then jumping to “shoot” it in the direction Flicky is facing. This makes for some interesting strategic decisions; since you can’t jump without firing an object you’re carrying, sometimes you’ll deliberately want to avoid the objects in order to make use of them when you really need them.

There are a few twists on the formula along the way. Firstly, some of the Chirps wear sunglasses because they are “bad” Chirps. This doesn’t mean they’ll hurt you, mind; it simply means they will behave more unpredictably (or “badly”) if they get knocked off the trail behind Flicky. In practice this doesn’t matter all that much, but it’s a nice little additional touch of personality to the game.

Every few levels, Flicky will be confronted with a bonus stage where she has to catch Chirps being flung into the air by cats using seesaws. Exactly why the cats aren’t just eating the Chirps isn’t entirely clear, but, well, it’s an arcade game; we’re not here for things that make logical sense. We’re here to score points! 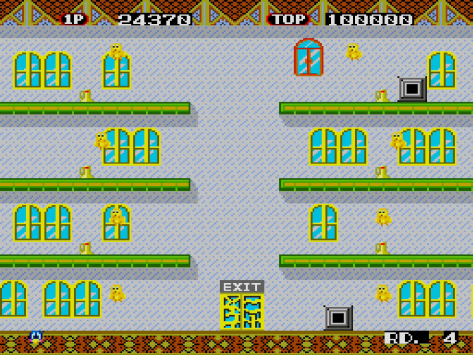 And Flicky really nails that addictive arcade feeling, balancing feelings of risk and reward really nicely to produce a game that is easy to pick up and start having fun with, but tricky to master — particularly given that there are a hundred unique levels, and after you complete them all, the whole thing just loops around again.

There’s one little aspect of Flicky that’s a little hard to deal with, however, and that’s the sound. It is, not to put too fine a point on it, pretty horrific, consisting of a screechy melody that accompanies the action (and doesn’t change from level to level) plus some incredibly piercing sound effects. Thankfully, most people playing Flicky today will be doing so on home hardware thanks to packages such as the Sega Mega Drive Classics collection, which includes its 1991 Mega Drive port, and as such it’s a simple matter to turn the sound down; if that version still offends your ears, however, the easily emulated arcade version is marginally less piercing, though still not exactly pleasant to listen to!

Don’t let the horrible noises it makes put you off, however; Flicky gave us one of Sega’s earliest video game mascots, and as such it is historically significant. Sega thinks so, too; over the years, Flicky and others of her species have put in guest appearances in a number of other games, beginning with Teddy Boy Blues in 1985 and continuing through Bloxeed, SDI, Flash Point, Super Monaco GP, Shenmue, Mario & Sonic at the Olympic Games and numerous installments of the Sonic the Hedgehog series. Indeed, Sonic’s inaugural “3D” (kind of) outing was known as Sonic 3D: Flickies’ Island in Europe, putting the blue sparrow and her friends very much at the forefront of that game.

Compared to some of Sega’s later games, Flicky might seem like lightweight fluff. But taken on its own merits, it’s a great example of early ’80s arcade addictiveness, and a game that provides an interesting and creative twist on an established formula from the period rather than just trying to clone another game outright.

6 thoughts on “Flicky: The Sound of Birdsong is So Beautiful”