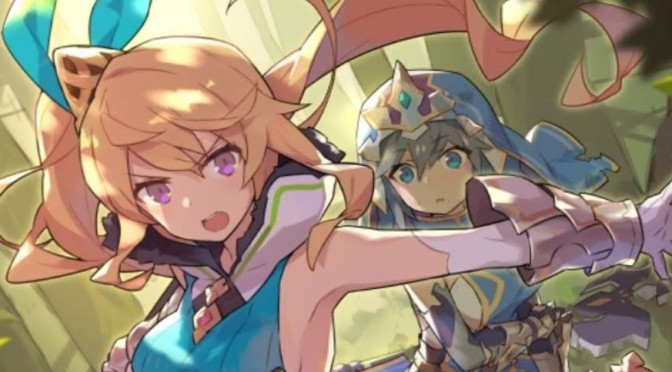 One interesting difference between “conventional” MMOs such as Final Fantasy XIV and mobile games with MMO elements such as Dragalia Lost is how they handle side stories and multiplayer “raid” content.

In your average MMO, raid content — typically defined as a series of significant challenges that are dependent on a much larger group of players than the game’s usual multiplayer aspect — remains present in the game after its introduction, but gradually declines in “relevance” as time goes on. In cases like Final Fantasy XIV, where there’s a significant narrative component, it remains worth engaging with to enjoy the story, but the more time that elapses since its original launch, the less helpful it becomes to players in mechanical terms.

In mobile MMOs, however, raid content is typically a limited-time affair, confined to an event that offers special rewards to everyone who participates for a short period of time. And that’s exactly what’s going on in Dragalia Lost right now. 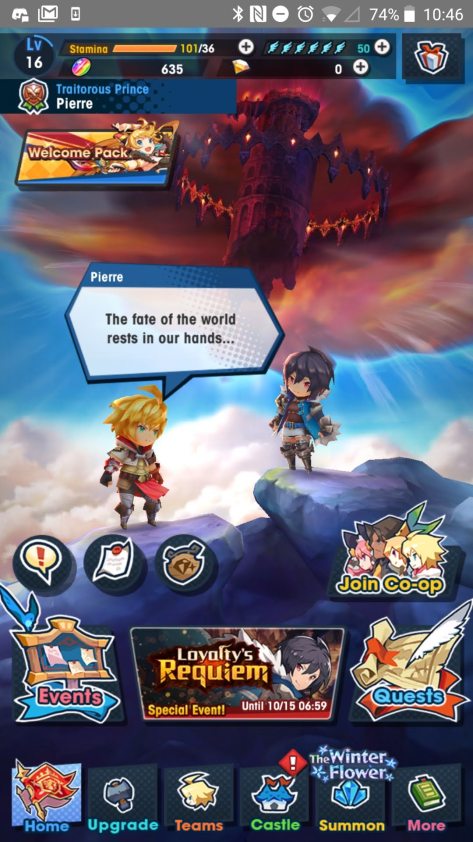 At the time of writing, the “Loyalty’s Requiem” event is taking place, and will last for just under another week. This is a typical example of an event in a Cygames title — players of Granblue Fantasy will find its implementation especially familiar.

In Loyalty’s Requiem, the protagonist and the main characters encounter a young woman named Celliera, who appears to be some sort of training instructor. Having established that she has apparently been abandoned by her students, who took a certain amount of umbrage at her rather enthusiastic training methods, the party becomes trapped in a volcanic cave alongside her and, through a convoluted process involving a wounded dragon, a king-turned-Cyclopean fiend and a house-sized monster named Phraeganoth, finds themselves hopping into a dimensional rift to try and prevent the world being overcome by darkness. All in a day’s work.

The event unfolds through several means. There’s an initial set of story sequences alternated with fairly straightforward quests that reflects the party’s journey into the volcano and their investigation of the mysterious phenomena around themselves. There’s a single-player boss fight against King Archeole. And then there’s the main event: the raid battle against Phraeganoth himself.

These latter two aspects are the most important part of the event so far as rewards are concerned, since they both reward you with Emblems (which net you fixed rewards at certain amounts collected) and Blazons (which allow you to draw random loot from a special pool of summons, including a five-star dragon and a four-star Wyrmprint specifically designed to help with the event). There’s no specific fixed “goal” for the event and indeed no obligation to participate in it at all if you don’t want to — but the rewards on offer are significant and helpful to your ongoing progress through the rest of the game, since besides the dragon and Wyrmprint, they also provide valuable upgrade items that will help you to improve your characters, weapons, Wyrmprints and dragons as well as materials to craft weapons.

The basic flow of how things work once you’ve cleared the introductory story and quests is that you fight King Archeole to earn “otherworld fragments”, and these then allow you the opportunity to fight Phraeganoth. Archeole rewards you with bronze Emblems and a few Blazons; Phraeganoth gives you silver Emblems and more Blazons. Both the Archeole and Phraeganoth fights have several difficulty levels, with higher difficulty levels recommending a higher Might level to clear but also offering significantly greater rewards, including gold Emblems for the most challenging Phraeganoth encounters.

Those difficulty levels aren’t just a case of making the bosses stronger, either. Moving up from the Beginner tier of Phraeganoth to Standard introduces a variety of new mechanics that you’ll need to engage with if you want to 1) survive and 2) beat the encounter within the time limit. Personally speaking, my teams aren’t quite up to challenging Expert just yet, but I can only assume things get more interesting a complex from there, too.

The Archeole boss fight is pretty straightforward and doesn’t particularly stand out from the game’s other boss fights, but the Phraeganoth encounter is another matter altogether. Requiring four players to bring a full party of four characters each, the battle provides you the opportunity to attack specific body parts of the boss in order to disable certain mechanics, and also gives players the means to issue quick orders (or more “suggestions” really) to the rest of the group by tapping on the health bars for those aforementioned body parts. Pro-tip: go for the tail first; that massive circle AoE is nasty!

The encounter moves through several distinct phases, with Phraeganoth’s Overdrive being one of the most prominent examples of this status actually introducing new attacks and mechanics. From Standard difficulty onwards, during Overdrive Phraeganoth will begin summoning magma vents in the ground, which each have enormous but slow to trigger AoE effects. Destroying a vent creates a safe area, so it’s in everyone’s interests to clear at least a bit of space in the area rather than simply wailing on the boss without thinking.

Alongside the event itself, the game is also currently running a “Summon Showcase” called The Winter Flower and the Tidal Power. During this showcase, the draw rates for the five-star water mage hero Lily (who also appeared in Granblue Fantasy) and the water dragon Leviathan are increased somewhat — and conveniently, water heroes and dragons are particularly useful in the fire-based event. It’s been quite amusing to see co-op rooms gradually turn into all-Lily lineups as the event has progressed and more people have had a successful summon.

Lily’s actually a useful character to have around for the event for more reasons than just her element — her Glacial Blossom skill, which she has access to from the moment you get her, is capable of freezing things. While it can’t bring Phraeganoth to a standstill, it does have the very useful effect of being able to temporarily freeze the charge time of the magma vents during Phraeganoth’s Overdrive, making dealing with them before they blow significantly easier. It also does some decent AoE damage in its own right and charges pretty quickly, so if you find yourself lucky enough to pull a Lily during the event, make good use of it when you can!

And there’s one last aspect to all this which you’ll probably get used to seeing over time as more events unfold: the ability to add the event’s central character (in this case, Celliera) to your squad. This is a straightforward if time-consuming process that requires you to build up a “friendship” meter simply by adding Celliera to one of your teams and making use of that team. Since she, too, is water element, she’s a helpful addition to your raid group — though it’s worth noting she is a bit fragile when you first get her, so if you plan on playing enough to grind her friendship up to the max, you’ll want to invest some time and materials in getting her equipped and levelled up somewhat to make her actually useful. 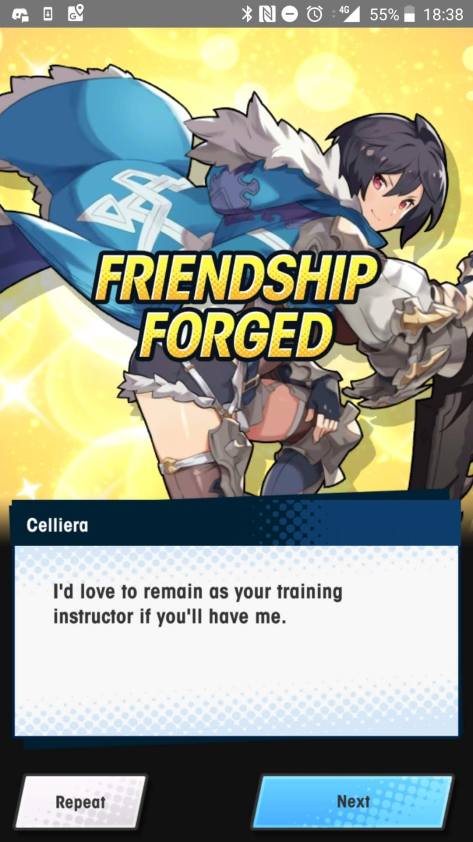 The event has been very enjoyable so far, and there always seems to be plenty of people playing for multiplayer funtimes. While the basic structure of the event is almost identical to one of the event types Granblue Fantasy puts on on a pretty regular basis, Dragalia Lost’s very different core gameplay makes for a really fun experience. The “live multiplayer” aspect of the raid in particular really makes for a strong sense of fighting alongside other people, whereas Granblue Fantasy’s raids tended to just feel like a normal battle where the boss had a lot of HP.

Of course, as with anything of this type, fighting the same boss over and over and over again gets more than a little repetitive after a while… but such is the way of these things, and any MMO veterans will be very accustomed to this kind of grind already! Rest assured that the rewards are worth it if you’re playing the game even semi-seriously — and it’s worth taking on the challenges at least once if only to hear the exclusive Daoko track for the Phraeganoth encounter. Be warned, it’s yet another earworm…